The United States has produced several coins and banknotes of its dollar which no longer circulate or have been disused. Many of these were removed for specific reasons such as inflation reducing their value, a lack of demand, or being too similar to another denomination.

The U.S. Dollar has numerous discontinued denominations, particularly high denomination bills, issued before and in 1934 in six denominations ranging from $500 to $100,000. Although still legal tender, most are in the hands of collectors and museums. The reverse designs featured abstract scroll-work with ornate denomination identifiers. With the exception of the $100,000 bill, these bills ceased production in the 1940s, and were recalled in 1969. Of these, the $100,000 was printed only as a Series 1934 gold certificate and was only used for internal government transactions. The United States also issued fractional currency for a brief time in the 1860s and 1870s, in several denominations each less than a dollar.

There have been numerous coins throughout the United States dollar's history that no longer circulate. Some, like the half-cent coin were removed due to inflation reducing their value while others such as the two-cent piece were removed due to a lack of demand.

Note that this table shows the latest status before the coin denomination was rendered obsolete.

The Mexican peso is the currency of Mexico. Modern peso and dollar currencies have a common origin in the 16th–19th century Spanish dollar, most continuing to use its sign, "$".

The Soviet ruble was the currency of the Russian Soviet Federative Socialist Republic (RSFSR) from 1917 and later the Union of Soviet Socialist Republics (USSR). One ruble was divided into 100 kopeks. Many of the ruble designs were created by Ivan Dubasov. The production of Soviet rubles was the responsibility of the Federal State Unitary Enterprise, or Goznak, which was in charge of the printing of and materials production for banknotes and the minting of coins in Moscow and Leningrad. In addition to regular currency, some other currency units were used, such as several forms of convertible ruble, transferable ruble, clearing ruble, Vneshtorgbank cheque, etc.; also, several forms of virtual rubles were used for inter-enterprise accounting and international settlement in the Comecon zone. In 1991, after the breakup of the USSR, the Soviet ruble continued to be used in the post-Soviet states, forming a "ruble zone", until it was replaced with the Russian ruble in September 1993. 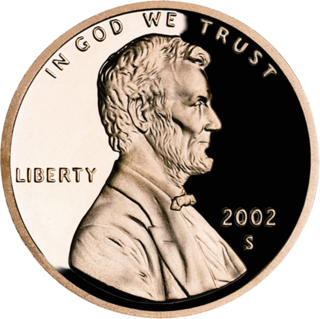 A debate exists within the United States government and American society at large over whether the one-cent coin, the penny, should be eliminated as a unit of currency in the United States. The penny costs more to produce than the one cent it is worth, meaning the seigniorage is negative – the government loses money on every penny that is created. Several bills introduced in the U.S. Congress would have ceased production of pennies, but none have been approved. Such bills would leave the five-cent coin, or nickel, as the lowest-value coin minted in the United States.

This article concerns the coins of the New Zealand dollar.