As of December 2018, the average life of a $50 bill in circulation is 12.2 years before it is replaced due to wear. [2] Approximately 3.5% of all notes printed in 2019 were $50 bills. [3] They are delivered by Federal Reserve Banks in beige straps. Next to the United States two-dollar bill, the fifty-dollar bill has the lowest circulation of any U.S. denomination measured by volume, with 1.8 billion notes in circulation as of December 31, 2019. [4]

The Series of 1928 was the first issue of small-size currency printed and released by the U.S. government. These notes, first released to the public on July 10, 1929, were the first standardized notes in terms of design and characteristics, featuring similar portraits and other facets. These notes were also the first to measure 6.14" by 2.61", quite a bit smaller than the large-sized predecessors of Series 1923 and earlier that measured 7.421 8" by 3.125" 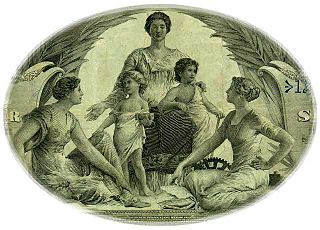 "Educational Series" is the informal name used by numismatists to refer to a series of United States silver certificates produced by the U.S. Treasury in 1896, after its Bureau of Engraving and Printing chief Claude M. Johnson ordered a new currency design. The notes depict various allegorical motifs and are considered by some numismatists to be the most beautiful monetary designs ever produced by the United States.

Birds of Canada is the fifth series of banknotes of the Canadian dollar issued by the Bank of Canada and was first circulated in 1986 to replace the 1969 Scenes of Canada series. Each note features a bird indigenous to Canada in its design. The banknotes weigh 1 gram with dimensions of 152.40 by 69.85 millimetres. It was succeeded by the 2001 Canadian Journey series.