The United States one-hundred-dollar bill ($100) is a denomination of United States currency. The first United States Note with this value was issued in 1862 and the Federal Reserve Note version was launched in 1914, alongside other denominations. [2] Statesman, inventor, diplomat, and American founding father Benjamin Franklin has been featured on the obverse of the bill since 1914. [3] On the reverse of the banknote is an image of Independence Hall in Philadelphia, which has been used since 1928. [3] The $100 bill is the largest denomination that has been printed and circulated since July 13, 1969, when the denominations of $500, $1,000, $5,000, and $10,000 were retired. [4] As of December 2018, the average life of a $100 bill in circulation is 22.9 years before it is replaced due to wear.

The bills are also commonly referred to as "Bens", "Benjamins", or "Franklins", in reference to the use of Benjamin Franklin's portrait by the French painter Joseph Duplessis on the denomination, as "C-Notes", based on the Roman numeral for 100, or as "blue faces", based on the blue tint of Benjamin Franklin's face in the bill's current design. The bill is one of two denominations printed today that does not feature a president of the United States, the other being the $10 bill, featuring Alexander Hamilton. It is also the only denomination today to feature a building not located in Washington, D.C., that being Independence Hall located in Philadelphia on the reverse. The time on the clock of Independence Hall on the reverse, according to the U.S. Bureau of Engraving and Printing, showed approximately 4:10. [5] It has been suggested this may refer to 4/10, or April 10, the 100th day of the year. The newer colorized notes show 10:30.

As of June 30, 2012, the $100 bill comprised 77% of all US currency in circulation. [7] Federal Reserve data from 2017 showed that the number of $100 bills exceeded the number of $1 bills. However, a 2018 research paper by the Federal Reserve Bank of Chicago estimated that 80 percent of $100 bills were in other countries. Possible reasons included $100 bills being used as a reserve currency against economic instability that affected other currencies, and use of the bills for criminal activities. [8]

Removal of large denomination bills ($500 and up)

Despite the degradation in the value of the U.S. $100 banknote (which was worth about $738.93 in 1969), and despite competition from some more valuable foreign notes (most notably, the 500 euro banknote), there are no plans to re-issue banknotes above $100. The widespread use of electronic means to conduct high-value transactions today has made large-scale physical cash transactions obsolete and therefore, from the government's point of view, unnecessary for the conduct of legitimate business. Quoting T. Allison, Assistant to the Board of the Federal Reserve System in his October 8, 1998 testimony before the U.S. House of Representatives, Subcommittee on Domestic and International Monetary Policy, Committee on Banking and Financial Services:

There are public policies against reissuing the $500 note, mainly because many of those efficiency gains, such as lower shipment and storage costs, would accrue not only to legitimate users of bank notes but also to money launderers, tax evaders and a variety of other lawbreakers who use currency in their criminal activity. While it is not at all clear that the volume of illegal drugs sold or the amount of tax evasion would necessarily increase just as a consequence of the availability of a larger dollar denomination bill, it no doubt is the case that if wrongdoers were provided with an easier mechanism to launder their funds and hide their profits, enforcement authorities could have a harder time detecting certain illicit transactions occurring in cash. [16] 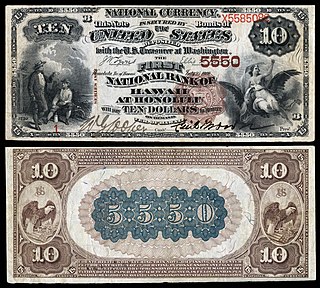 The Series of 1928 was the first issue of small-size currency printed and released by the U.S. government. These notes, first released to the public on July 10, 1929, were the first standardized notes in terms of design and characteristics, featuring similar portraits and other facets. These notes were also the first to measure 6.14" by 2.61", smaller than the large-sized predecessors of Series 1923 and earlier that measured 7.421 8" by 3.125".

Wikimedia Commons has media related to 100 United States dollar banknotes .
This page is based on this Wikipedia article
Text is available under the CC BY-SA 4.0 license; additional terms may apply.
Images, videos and audio are available under their respective licenses.