Cyrus was an early member of the Achaemenid dynasty. He was apparently a grandson of its founder Achaemenes and son of Teispes, king of Anshan. Teispes' sons reportedly divided the kingdom between them after his death. Cyrus reigned as king of Anshan while his brother Ariaramnes was king of Parsa.

The chronological placement of this event is uncertain. This is due to his suggested, but still debated identification, with the monarch known as "Kuras of Parsumas". Kuras is first mentioned c. 652 BC. In that year Shamash-shum-ukin, king of Babylon (668–648 BC), revolted against his older brother and overlord Ashurbanipal, king of Assyria (668–627 BC). Cyrus is mentioned being in a military alliance with the former. The war between the two brothers ended in 648 BC with the defeat and reported suicide of Shamash-shum-ukin.

Cyrus is mentioned again in 639 BC. At that year Ashurbanipal managed to defeat Elam and became overlord to several of its former allies. Kuras was apparently among them. His elder son "Arukku" was reportedly sent to Assyria to pay tribute to its King. Kuras then seems to vanish from the historical record. His suggested identification with Cyrus would help connect the Achaemenid dynasty to the major events of the 7th century BC.

Ashurbanipal died in 627 BC. Cyrus presumably continued paying tribute to his sons and successors Ashur-etil-ilani (627–623 BC) and Sin-shar-ishkun (623–612 BC). They were both opposed by an alliance led by Cyaxares of Media (633–584 BC) and Nabopolassar of Babylon (626–605 BC). In 612 BC the two managed to capture the Assyrian capital Nineveh. This was effectively the end of the Neo-Assyrian Empire though remnants of the Assyrian Army under Ashur-uballit II (612–609 BC) continued to resist from Harran.

Media and Babylon soon shared the lands previously controlled by the Assyrians. Anshan apparently fell under the control of the former. Cyrus is considered to have ended his days under the overlordship of either Cyaxares or his son Astyages (584–550 BC). Cyrus was succeeded by his son Cambyses I. His grandson would come to be known as Cyrus the Great, founder of the Persian Empire.

It has been noted that this account of his life and reign would place his early activities more than a century before those of his grandson. This would place his fathering of Cambyses very late in life and his death at an advanced age. It has been argued that Kuras and Cyrus were separate figures of uncertain relation to each other. The latter would have then reigned in the early 6th century BC and his reign would seem rather uneventful. Due to the current lack of sufficient records for this historical period it remains uncertain which theory is closer to the facts.

It has been suggested by Louis Vandenberg that the Gur-e-Dokhtar is the tomb of Cyrus I.[ citation needed ] This is because all Achaemenid kings after Darius the Great were buried in rock-cut tombs, and because a similar building has been attributed to Cyrus the Great, it seemed logical to assume that a tomb like this must have been erected prior to the reign of Cyrus. However, other experts have claimed that it is the burial place of Mandane, mother of Cyrus the Great, while other scholars claim that the Gur-e-Dokhtar was the mausoleum of Atossa, the daughter of Cyrus the Great and the wife and queen of Darius the Great. Later, when the iron clamps were studied, it became clear that this building was erected in the 5th century BC, so it may have been for prince Cyrus the Younger.[ citation needed ]

The year 651 BC was a year of the pre-Julian Roman calendar. In the Roman Empire, it was known as year 103 Ab urbe condita. The denomination 651 BC for this year has been used since the early medieval period, when the Anno Domini calendar era became the prevalent method in Europe for naming years. 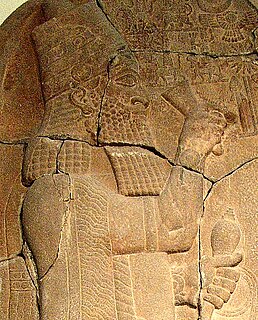 Esarhaddon, also spelled Essarhaddon, Assarhaddon and Ashurhaddon, was the king of the Neo-Assyrian Empire from the death of his father Sennacherib in 681 BC to his own death in 669 BC. The third king of the Sargonid dynasty, Esarhaddon is most famous for his conquest of Egypt in 671 BC, which made his empire the largest the world had ever seen, and for his reconstruction of Babylon, which had been destroyed by his father. 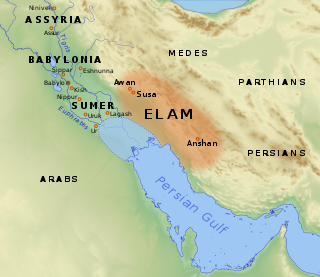 Elam was an ancient Pre-Iranian civilization centered in the far west and southwest of modern-day Iran, stretching from the lowlands of what is now Khuzestan and Ilam Province as well as a small part of southern Iraq. The modern name Elam stems from the Sumerian transliteration elam(a), along with the later Akkadian elamtu, and the Elamite haltamti. Elamite states were among the leading political forces of the Ancient Near East. In classical literature Elam was also known as Susiana, a name derived from its capital Susa. 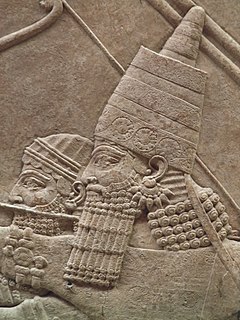 Ashurbanipal, also spelled Assurbanipal, Asshurbanipal and Asurbanipal, was the king of the Neo-Assyrian Empire from the death of his father Esarhaddon in 669 BC to his own death in 631 BC. The fourth king of the Sargonid dynasty, Ashurbanipal is generally remembered as the last great king of Assyria. 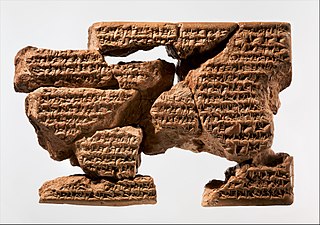 Sinsharishkun or Sin-shar-ishkun was the penultimate king of Assyria, reigning from the death of his brother and predecessor Ashur-etil-ilani in 627 BC to his own death at the Fall of Nineveh in 612 BC. 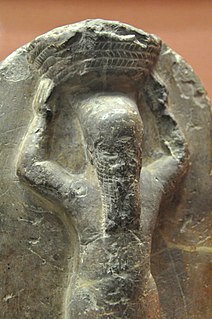 Shamash-shum-ukin or Shamashshumukin, also known as Saulmugina and Sarmuge, was the son of the Neo-Assyrian king Esarhaddon and his appointed successor as King of Babylon, ruling Babylonia from 668 BC to his death in 648 BC.

Ashur-etil-ilani, also spelled Ashur-etel-ilani and Ashuretillilani, was the king of the Neo-Assyrian Empire from the death of his father Ashurbanipal in 631 BC to his own death in 627 BC. Ashur-etil-ilani is an obscure figure with a brief reign from which few inscriptions survive. Because of this lack of sources, very little concrete information about the king and his reign can be deduced.

The Battle of Nineveh is conventionally dated between 613 and 611 BC, with 612 BC being the most supported date. Rebelling against the Assyrians, an allied army which combined the forces of Medes and the Babylonians, besieged Nineveh and sacked 750 hectares of what was, at that time, the greatest city in the world. The fall of Nineveh led to the destruction of the Neo-Assyrian Empire over the next three years as the dominant state in the Ancient Near East. Archeological records show that the capital of the once mighty Assyrian Empire was extensively de-urbanized and depopulated in the decades and centuries following the battle.

The Neo-Assyrian Empire was an Iron Age Mesopotamian empire, in existence between 911 and 609 BC, and became the largest empire of the world up until that time. The Assyrians perfected early techniques of imperial rule, many of which became standard in later empires, and was, according to many historians, the first real empire in history. The Assyrians were the first to be armed with iron weapons, and their troops employed advanced, effective military tactics.

The timeline of the Assyrian Empire lists the kings, their successors and the major events that occurred in the Assyrian history.

The Sargonid dynasty was the final ruling family of the Neo-Assyrian Empire, beginning with Sargon II's ascent to the throne in 722 BC and ending with the fall of the Assyria after the death of Sinsharishkun in 612 BC at the hands of a coalition of invaders. The dynasty contains some of the greatest and most successful Assyrian kings and it marked the end of a 1500-year period of Assyrian ascendancy. Although the Sargonid dynasty retained control of Assyria until its fall and compromised not only Assyrian kings but also vassal kings appointed to rule Babylon and a multitude of princes and princesses, the term is often used to just refer to the reigns of its four first and greatest kings; Sargon II, Sennacherib, Esarhaddon and Ashurbanipal.

King of the Lands, also interpreted as just King of Lands or the more boastful King of All Lands was a title of great prestige claimed by powerful monarchs in ancient Mesopotamia. Introduced during the Neo-Assyrian Empire, the term mātāti explicitly refers to foreign lands, often beyond the confines of Mesopotamia itself, suggesting that the Assyrian king had the right to govern foreign lands as well as his own.

Serua-eterat or Serua-etirat, called Saritrah in later Aramaic texts, was an ancient Assyrian princess, the eldest daughter of King Esarhaddon and the older sister of his son and successor Ashurbanipal. She is the only one of Esarhaddon's daughters who is known by name and inscriptions listing the royal children suggest that she outranked several of her brothers in importance; outranking younger male children such as Ashur-mukin-paleya but ranking behind the crown princes Ashurbanipal and Shamash-shum-ukin. Her importance could be explained by her possibly being the oldest of all Esarhaddon's children.