Dutch euro coins currently use two designs by Erwin Olaf, both of which feature a portrait of King Willem-Alexander of the Netherlands. The new designs began circulating in 2014. [1] Dutch Euro coins minted from 1999 to 2013 feature a portrait of Queen Beatrix designed by Bruno Ninaber van Eyben. All coins share the 12 stars of the EU and the year of imprint in their design.

As is the case in Finland, most Dutch shops have elected not to issue one and two cent coins starting on September 1, 2004, though the coins remain legal tender. Sums are rounded to the nearest five cents; sums ending in 1, 2, 6 or 7 cents are rounded down, and those ending in 3, 4, 8 or 9 cents are rounded up. The rounding is applied to the grand total only, while individual prices are still shown and summed up with €0.01 precision. This method is known as "Swedish rounding".

For images of the common side and a detailed description of the coins, see euro coins.

Following the accession to the throne of King Willem-Alexander, a new series of euro coins was issued depicting the effigy of the new Head of State.

The Commission of the European Communities issued a recommendation on 19 December 2008, a common guideline for the national sides and the issuance of euro coins intended for circulation. One section of this recommendation stipulates that:

Article 4. Design of the national sides:

"The national side of the euro coins intended for circulation should bear the 12 European stars that should fully surround the national design, including the year mark and the indication of the issuing Member State's name. The European stars should be depicted as on the European flag."

The first series of the Dutch euro coins did not comply with this recommendation. No efforts were made to amend these coins to make them compliant.

Queen Beatrix abdicated on 30 April 2013, so the design of the coins was changed for her heir, King Willem-Alexander of the Netherlands. The new coins were made to be in accordance with this recommendation. The Royal Dutch Mint presented the new design to the public on 31 October 2013 and began releasing them into circulation in early 2014.(see ). Production of the new coins commenced on 22 January 2014. The first coins were released into circulation the next day. [1]

Irish euro coins all share the same design by Jarlath Hayes, that of the harp, a traditional symbol for Ireland since the Middle Ages, based on that of the Brian Boru harp, housed in Trinity College, Dublin. The same harp is used as on the official seals of the Taoiseach, and government ministers and the Seal of the President of Ireland. The coins' design also features the 12 stars of the EU, the year of issue and the Irish name for Ireland, "Éire", in a traditional Gaelic script.

Vatican euro coins are issued by the Philatelic and Numismatic Office of the Vatican City State and minted by Istituto Poligrafico e Zecca dello Stato (IPZS), in Rome, Italy. The euro is the official currency of the Vatican City, although the Vatican is not a member of the Eurozone or the European Union.

Estonian euro coins feature a single design for all eight coins. This is a design by Lembit Lõhmus and features a silhouette map of Estonia together with the word Eesti (Estonia) and twelve stars, symbolic of the European Union, surrounding the map. This was the winning design in a public vote of ten announced in December 2004.

€2 commemorative coins are special euro coins minted and issued by member states of the eurozone since 2004 as legal tender in all eurozone member states. Only the national obverse sides of the coins differ; the common reverse sides do not. The coins typically commemorate the anniversaries of historical events or draw attention to current events of special importance. In 2007, 2009, 2012 and 2015, there were common commemorative coins with only different national inscriptions. Up to end of 2017, three hundred and two variations of €2 commemorative coins have been minted – six in 2004, eight in 2005, seven in 2006, twenty in 2007, ten in 2008, twenty-five in 2009, twelve in 2010, sixteen in 2011, thirty in 2012, twenty-three in 2013, twenty-six in 2014, forty-seven in 2015, and thirty-two both in 2016 and 2017. Finland, Italy, Luxembourg, San Marino and the Vatican City are the only countries to have released at least one commemorative coin every year since 2004.

The 1 euro cent coin (€0.01) has a value of one hundredth of a euro and is composed of copper-covered steel. The coins of every Euro country have a common reverse and each has a country-specific (national) obverse. The coin has been used since 2002 and was not redesigned in 2007 as was the case with the higher-value coins.

The 2 euro cent coin (€0.02) has a value of one-fiftieth of a euro and is composed of copper-plated steel. All coins have a common reverse and country-specific (national) obverse. The coin has been used since 2002 and was not redesigned in 2007 as were the higher-value coins.

The 5 euro cent coin (€0.05) has a value of one twentieth of a euro and is composed of copper-covered steel. All coins have a common reverse and country-specific (national) obverse. The coin has been used since 2002 and was not re-designed in 2007 as was the case with the higher-value coins. 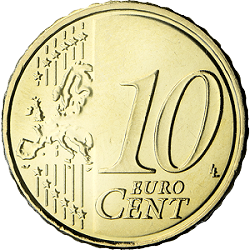 The 10 euro cent coin (€0.10) has a value of one tenth of a euro and is composed of an alloy called Nordic gold. All coins have a common reverse side and country-specific national sides. The coin has been used since 2002, with the present common side design dating from 2007.

Andorra has a monetary agreement with the EU allowing it to make the euro its official currency, and permitting it to issue euro coins from 1 July 2013. They planned to issue their first coins by March or April 2014. On 23 December coins were delivered for pre-booked customers at the Government Administration Building, and actual circulation began on 15 January 2015.