Epipactis, or helleborine, is a genus of terrestrial orchids consisting of approximately 70 species. This genus is abbreviated as Epcts in horticultural trade.

Their creeping, fleshy rhizomes grow offshoots, from which then emerge the 20–70 cm long stems during the next spring.

There are four to eight alternate, lanceolate leaves, that grow progressively shorter near the top. The margins are entire, the top is acute. Species with less chlorophyll have blue-purple leaves.

Their bilaterally symmetrical colorful flowers grow from a terminal raceme. The three sepals and the two lateral petals are ovate and acuminate. Their color can vary from greenish-white to violet and purple.

The lip is divided in a bowl-shaped hypochile, with the outer surface greenish-white and threaded with dark veins. The wavy, snow-white epichile is fan-shaped.

The ovary is inferior. It produces a dry capsule with countless minute seeds.

As is characteristic of all orchids, Epipactis spp. are dependent on a mycorrhizal symbiosis (see also Orchid mycorrhiza). This allows some species to have reduced leaves and need little chlorophyll. Violet helleborine (Epipactis viridiflora) can even do without chlorophyll. These forms can be recognized by their purple instead of violet flowers.

The species occur in temperate and subtropical climates of America, Asia, and Europe. These orchids grow in open spaces in forests, in undergrowth, on calcareous soils and are often found in wet dune-slacks near the sea. The only original American species is the giant helleborine ( Epipactis gigantea ). One species from Europe, broad-leaved helleborine ( Epipactis helleborine ), is invasive in North America. Most species are protected.

Most of these hardy orchids grow in a wet environment, but there are exceptions. The marsh helleborine ( Epipactis palustris ) is the only European orchid able to survive in a flooded habitat. Epipactis gigantea is a species found in the American west, and into southern Canada, in wet areas and even streams. It can grow to a height of 1 m. However, Epipactis helleborine grows in more diverse habitats, from sheltered sandy beaches to open spaces in deciduous or coniferous forests, on roadsides, in meadows, and on moist soils. It is sometimes called the weed orchid.

Dactylorhiza fuchsii, the common spotted orchid, is a species of flowering plant in the orchid family Orchidaceae.

The genus Ophrys is a large group of orchids from the alliance Orchis in the subtribe Orchidinae. They are widespread across much of Europe, North Africa, Caucasus, the Canary Islands, and the Middle East as far east as Turkmenistan.

Dactylorhiza is a genus of flowering plants in the orchid family Orchidaceae. Its species are commonly called marsh orchids or spotted orchids. Dactylorhiza were previously classified under Orchis, which has two round tubers.

Orchis is a genus in the orchid family (Orchidaceae), occurring mainly in Europe and Northwest Africa, and ranging as far as Tibet, Mongolia, and Xinjiang. The name is from the Ancient Greek ὄρχις orchis, meaning "testicle", from the appearance of the paired subterranean tuberoids. 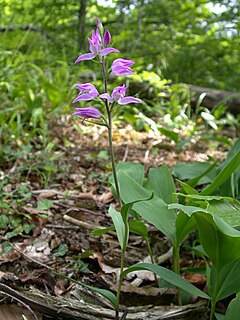 Cephalanthera rubra, known as red helleborine, is an orchid found in Europe, North Africa and southwest Asia. Although reasonably common in parts of its range, this Cephalanthera has always been one of the rarest orchids in Britain.

Cephalanthera, abbreviated Ceph in horticultural trade, is a genus of mostly terrestrial orchids. Members of this genus have rhizomes rather than tubers. About 15 species are currently recognized, most of them native to Europe and Asia. The only species found in the wild in North America is Cephalanthera austiniae, the phantom orchid or snow orchid. Ecologically, this species is partially myco-heterotrophic. Some of the Eurasian species hybridise.

Orchis mascula, the early-purple orchid, early spring orchis, is a species of flowering plant in the orchid family, Orchidaceae.

Epipactis atrorubens, the dark-red helleborine or royal helleborine, is an herbaceous plant in the orchid family, Orchidaceae.

Ophrys sphegodes, commonly known as the early spider-orchid, is a species of sexually-deceptive orchid native to Europe and the Middle East. It is a very varied species with many subspecies recognised.

Dactylorhiza lapponica, the Lapland marsh-orchid, is an orchid found in Scandinavia, Germany, Austria, Switzerland, France, Italy and the Czech Republic.

Dactylorhiza maculata, known as the heath spotted-orchid or moorland spotted orchid, is an herbaceous perennial plant of the family Orchidaceae. It is widespread in mountainous regions across much of Europe from Portugal and Iceland east to Russia. It is also found in Algeria, Morocco, and western Siberia.

Epipactis helleborine, the broad-leaved helleborine, is a terrestrial species of orchid with a broad distribution. It is a long lived herb which varies morphologically with ability to self-pollinate.

Epipactis palustris, the marsh helleborine, is a species of orchid native to Europe and Asia. 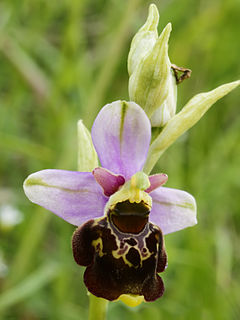 Ophrys fuciflora is a species of flowering plant in the orchid family. It is widespread across much of Europe from Britain and Spain to Turkey and Romania, plus Libya and the Middle East as far east as Iraq. 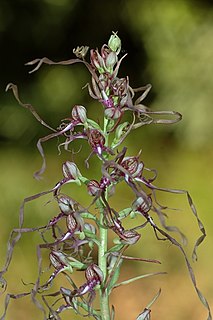 Himantoglossum is a genus of orchids native to the Canary Islands, Europe, southwest Asia and northern Africa. Its members generally have a labellum which is divided into three parts, of which the middle part is the longest.

Ophrys omegaifera, the omega bee-orchid, is a species of orchid native to the Mediterranean region from Portugal and Morocco to Syria. 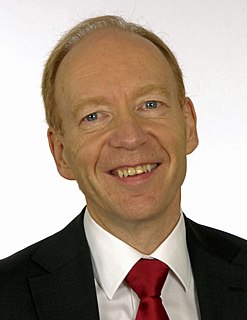 Carolus Adrianus Johannes "Karel" Kreutz is a Dutch orchidologist, botanical writer and taxonomist, currently affiliated with the Centre for Biodiversity Naturalis in Leiden, Netherlands. He is regarded as an exceptionally experienced orchidologist, and has published orchid floras of Cyprus, Turkey, Rhodes, Crimea, Netherlands, Belgium and Germany, and is currently preparing a major overview in ten volumes of all Orchid taxa in Europe, North Africa and the Middle East, employing modern taxonomy, nomenclature and research techniques.