The Federal Police is commanded by the Austrian Federal Ministry of the Interior. The Federal Minister of the Interior is the highest law enforcement authority. The Regional Police Directorates - established as federal authorities in the provinces - are subordinate to the Federal Minister. District administrative authorities (i.e. authorities established in the provinces for indirect federal administration) are subordinate to the Regional Police Directorates. There are nine separate regional police directorates which correspond to the nine states of Austria. They are as follows:

Dependent on the division, the districts and cities are controlled by either a District Police Command or a City Police Command. These commands then operate through several police stations throughout the state.

The standard issue sidearm of the Austrian Federal Police officers is the Glock pistol in 9mm Parabellum. The most common model used are Glock 17 and Glock 19 both being the Gen 3 models while EKO Cobra also gain the Glock 18 with full-auto capability for more firepower. Officers are also equipped with batons and pepper spray for use as a less lethal option. [3] Officers may also use Steyr AUG assault rifle, the Heckler & Koch MP5 and other similar heavy duty weapons required for specialist operations.

The ground vehicles currently used by the Federal Police include:

The Federal Police experimented with a Porsche 911 in order to crack down on motorway speeding. After a six-month test phase, the Federal Police decided not to order more 911s due to fact that there was not sufficient storage space for their equipment and the high-cost of the vehicles. [4]

Aircraft currently used by the Federal Police include:

The Federal Police is the national and principal federal law enforcement agency of the German Federal Government, being subordinate to the Federal Ministry of the Interior, Building and Community. The Federal Police is primarily responsible for border protection, railroad and aviation/air security. In addition, the agency is responsible, among other tasks, for the protection of federal constitutional bodies. It provides the federal alert police and GSG 9 special police unit, which can also be used to support the federated states of Germany. Ordinary police forces, meanwhile, are under the administration of the individual German states (Bundesländer) and are known as the Landespolizei. In addition to the Federal Police, the Federal Criminal Police Office and the German Parliament Police exist as further police authorities at federal level.

Polizei is the German word for police. Police in Germany, Austria and Switzerland consist of different agencies. It might refer to: 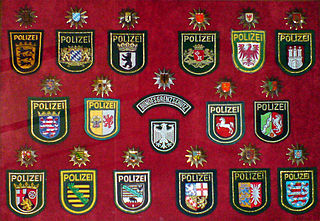 The Romanian Police is the national police force and main civil law enforcement agency in Romania. It is subordinated to the Ministry of Administration and Interior and it is led by a General Inspector with the rank of Secretary of State. 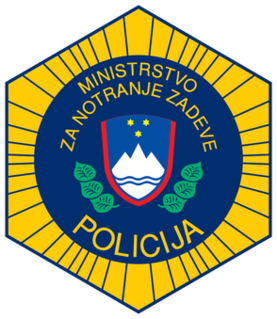 The Slovenian National Police Force is the government agency that handles the responsibility of law enforcement in Slovenia. It is composed of the eight police directorates in Celje, Koper, Kranj, Ljubljana, Maribor, Murska Sobota, Nova Gorica, and Novo Mesto. Law enforcement in Slovenia is governed by the Slovenian Ministry of Internal Affairs. The police force maintains a number of international partnerships with foreign police forces, including training with the U.S. Federal Bureau of Investigation, and involvement in Albania and Kosovo with the Multinational Advisory Police Element. The Slovenian police force was admitted to Organization for Security and Co-operation in Europe on March 24, 1992.

Law enforcement in Austria is the responsibility of the Directorate General for Public Security, a subdivision of the Federal Ministry of the Interior located at Herrengasse 7 in Vienna. Over 20,000 police officers are on duty in the Federal Police at more than 1,000 police stations. On lakes and rivers the federal police has over 70 boats and other craft to act as the water police.

Law enforcement in Croatia is the responsibility of the Croatian Police, which is a public service of the Ministry of the Interior of the Republic of Croatia, carrying out certain tasks, the so-called, police activities, laid down by law.

The Police of Serbia, formally the Police of the Republic of Serbia, commonly abbreviated to Serbian Police, is the civilian police force of Serbia. The Serbian Police is responsible for all local and national law enforcement. It is under the jurisdiction of the Ministry of Internal Affairs. The General Police Directorate of the Ministry of Internal Affairs has 15 organizational units and 27 Regional Police Directorates.

The Federal Gendarmerie was an Austrian federal police agency. It was responsible for approximately two thirds of the population on approximately 98% of Austrian national territory, alongside the Federal Safety Guard Corps (Bundessicherheitswachekorps) and Detective Corps (Kriminalbeamtenkorps). All Austrian law enforcement agencies were merged into the Federal Police (Bundespolizei) agency, with effect from 1 July 2005.

National Police Corps, colloquially in English as Dutch National Police or National Police Force, is divided in ten regional units and a central unit, and the Royal Marechaussee, a gendarmerie. Law enforcement in the Netherlands operates primarily through governmental police agencies. The law-enforcement purposes of these agencies are the investigation of suspected criminal activity, referral of the results of investigations to the courts, and the temporary detention of suspected criminals pending judicial action. Law enforcement agencies, to varying degrees at different levels of government and in different agencies, are also commonly charged with the responsibilities of deterring criminal activity and preventing the successful commission of crimes in progress. The police commissioner in the Netherlands is Henk van Essen since May 1, 2020. 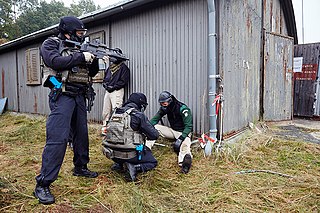 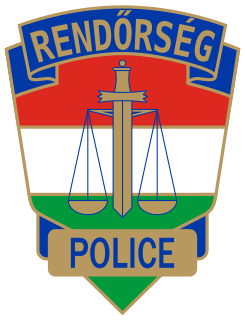 The Rendőrség is the national civil law enforcement agency of Hungary and is governed by the Interior Ministry. Until 2006, The Police operated under the authority of the Ministry of the Interior. From 2006 to 2010, the Ministry of Justice and Law Enforcement was the governing body of The Police, which absorbed the Border Guard on December 31, 2007. 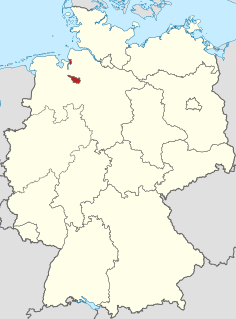 The Bremen State Police is the state police force of the Free Hanseatic City of Bremen. It employs circa 2,500 officers. The agency is headed by police chief Lutz Müller; the political head is the Senator for the Interior Ulrich Mäurer.