Foreign aid to Iraq has increased to handle reconstruction efforts.

In 2004 the U.S. Agency for International Development was responsible for awarding contracts totaling US$900 million for capital construction, seaport renovation, personnel support, public education, public health, government administration, and airport management. The World Bank committed US$3 billion to US$5 billion for reconstruction over a five-year period, and smaller commitments came from Japan, the European Union, Britain, and Spain. Russia canceled 65 percent of Iraq's debt of US$8 billion, and Saudi Arabia offered an aid package totaling US$1 billion. Also, Iran has been accused of giving some monetary support to individual political parties. Some US$20 billion of U.S. 2004 appropriations for Iraq were earmarked for reconstruction. Effective application of such funds, however, depends on substantial improvement in infrastructural and institutional resources. Because Iraq's international debt situation had not been elaborated in 2005, for the foreseeable future U.S. funds are expected to pay for capital investments in rebuilding.

In May 2003, following the invasion of Iraq in March of that year, the Central Bank of Iraq-Development Fund for Iraq (DFI) account was created at the U.S. Federal Reserve Bank of New York at the request of the Coalition Provisional Authority (CPA) Administrator. A part of the fund has been transferred to Baghdad and Iraq, and the DFI-Baghdad account was opened at the Central Bank of Iraq "for cash payment requirements". The fund also eventually received money from seized and "vested" Iraqi bank accounts and funds seized by coalition forces. of this amount belongs to Uday Saddam Hussein, the older son of the former Iraqi president. The DFI have been disbursed mainly for "the wheat purchase program, the currency exchange program, the electricity and oil infrastructure programs, equipment for Iraqis security forces, and for Iraqi civil service salaries and ministry budget operations".

The Iraq Relief and Reconstruction Fund (IRRF) was established by the US Congress on November 6, 2003. It allocated $18.4 billion to rebuild Iraq's infrastructure, damaged from years of neglect, sanctions, and war.

The Country Studies are works published by the Federal Research Division of the United States Library of Congress, freely available for use by researchers. No copyright is claimed on them. Therefore, they have been dedicated to the public domain and can be copied freely, though not all the pictures used therein are in the public domain. The Country Studies Series presents a description and analysis of the historical setting and the social, economic, political, and national security systems and institutions of countries throughout the world. The series examines the interrelationships of those systems and the ways they are shaped by cultural factors. 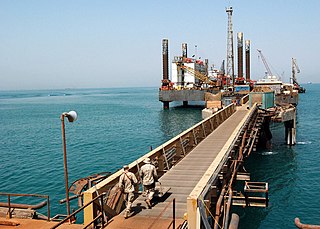 Iraq’s economy is dominated by the oil sector, which has provided about 99.7% of foreign exchange earnings in modern times. In the 1980s, financial problems caused by massive expenditures in the eight-year war with Iran and damage to oil export facilities by Iran led the government to implement austerity measures, borrow heavily, and later reschedule foreign debt payments; Iraq suffered economic losses of at least $80 billion from the war. After the end of hostilities, in 1988, oil exports gradually increased with the construction of new pipelines and restoration of damaged facilities.

The Marshall Plan was an American initiative passed in 1948 to aid Western Europe, in which the United States gave over $12 billion in economic assistance to help rebuild Western European economies after the end of World War II. Replacing an earlier proposal for a Morgenthau Plan, it operated for four years beginning on April 3, 1948. The goals of the United States were to rebuild war-torn regions, remove trade barriers, modernize industry, improve European prosperity, and prevent the spread of Communism. The Marshall Plan required a reduction of interstate barriers, a dropping of many regulations, and encouraged an increase in productivity, as well as the adoption of modern business procedures. 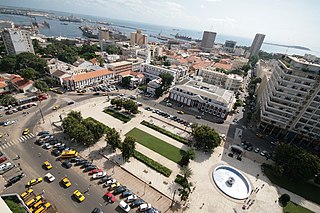 Predominantly rural, and with limited natural resources, the economy of Senegal gains most of its foreign exchange from fish, phosphates, groundnuts, tourism, and services. The agricultural sector of Senegal is highly vulnerable to variations in rainfall and changes in world commodity prices. The former capital of French West Africa, is also home to banks and other institutions which serve all of Francophone West Africa, and is a hub for shipping and transport in the region. 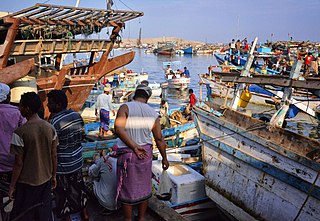 At the time of unification, South Yemen and North Yemen had vastly different but equally struggling underdeveloped economic systems. Since unification, the economy has been forced to sustain the consequences of Yemen's support for Iraq during the 1990–91 Persian Gulf War: Saudi Arabia expelled almost 1 million Yemeni workers, and both Saudi Arabia and Kuwait significantly reduced economic aid to Yemen. The 1994 civil war further drained Yemen's economy. As a consequence, for the past 24 years Yemen has relied heavily on aid from multilateral agencies to sustain its economy. In return, it has pledged to implement significant economic reforms. In 1997 the International Monetary Fund (IMF) approved two programs to increase Yemen's credit significantly: the enhanced structural adjustment facility and the extended funding facility (EFF). In the ensuing years, Yemen's government attempted to implement recommended reforms—reducing the civil service payroll, eliminating diesel and other subsidies, lowering defense spending, introducing a general sales tax, and privatizing state-run industries. However, limited progress led the IMF to suspend funding between 1999 and 2001.

The Coalition Provisional Authority was a transitional government of Iraq established following the invasion of the country on 19 March 2003 by the U.S.-led Multinational Force and the fall of Ba'athist Iraq. 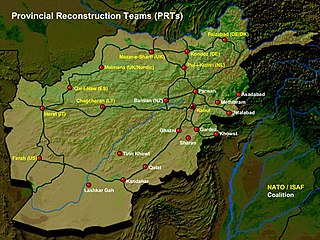 A Provincial Reconstruction Team (PRT) was a unit introduced by the United States government, consisting of military officers, diplomats, and reconstruction subject matter experts, working to support reconstruction efforts in unstable states. PRTs were first established in Afghanistan in early 2002, and as of 2008 operate there as well as in Iraq. While the concepts are similar, PRTs in Afghanistan and Iraq had separate compositions and missions. Their common purpose, however, was to empower local governments to govern their constituents more effectively.

Investment in post-2003 Iraq refers to international efforts to rebuild the infrastructure of Iraq since the Iraq War in 2003.

Before the creation of this entity under the title 'Australian Aid', the Australian government's agency for the delivery of foreign aid was the separate entity known as AusAID, which indeed had formally been the Australian Agency for International Development, where AusAID was until 2013 the Australian organisation responsible for delivering most non-military foreign aid. It was an autonomous Commonwealth agency within the portfolio of the Minister for Foreign Affairs, and was an independent agency under the Financial Management and Accountability Act, yet part of the Department of Foreign Affairs and Trade for the purposes of the Public Service Act which covers human resources and non-financial accountability. It was based in the national capital, Canberra, and had representation in 25 Australian diplomatic missions overseas. However, on the 1st of November 2013, AusAID ceased to exist, with its substantial body of work re-evaluated and integrated into 'DFAT'. Since that time, DFAT maintains responsibility for the Australian Aid programme, which is the streamlined version of the former agency.

Because of its abundant natural resources, there was little need for foreign aid to Venezuela until it was hit by an economic crisis in 1989. From 1994 to 2002, the European Union (EU) committed €130 million. European aid is focusing on technical and financial cooperation projects in the areas of education, health, prison conditions, regional development, environment, and the fight against narcotics. A total of €63.8 million has been earmarked for Venezuela for the period 2000–2006 for technical and financial co-operation and rehabilitation and reconstruction.

After World War II, Ethiopia began to receive economic development aid from the more affluent Western countries. Originally the United Kingdom was the primary source of this aid, but they withdrew in 1952, to be replaced by the United States. Between 1950 and 1970, one source estimated that Ethiopia received almost US$600 million in aid, $211.9 million from the US, $100 million from the Soviet Union and $121 million from the World Bank. Sweden trained the Imperial Bodyguard and India at one point contributed the majority of foreign-born schoolteachers in the Ethiopian educational system.

Haiti—an island country 600 miles off the coast of the U.S. state of Florida—shares the Caribbean island of Hispaniola with the Dominican Republic. Haiti has received billions in foreign assistance, yet persists as one of the poorest countries. There have been more than 15 natural disasters since 2001 including tropical storms, flooding, earthquakes and hurricanes. The international donor community classifies Haiti as a fragile state. Haiti is also considered a post-conflict state—one emerging from a recent coup d'état and civil war.

Nepal relies heavily on foreign aid, and donors coordinate development aid policy through the Nepal Development Forum, whose members include donor countries, international financial institutions, and inter-governmental organizations. The United Kingdom is Nepal's largest bilateral aid donor, and the World Bank and Asian Development Bank are the largest multilateral donors. Donors have been reported as losing confidence in Nepal as a result of political interference and corruption in poverty relief efforts as well as the country's apparently poor capacity to utilize aid. According to World Bank figures, official development assistance increased from US$8.2 million in 1960 to US$369 million in 2003 and then fell to US$177 million in 2004. According to Nepal's Ministry of Finance, total foreign aid committed in fiscal year (FY) 2003 was US$555 million, with 63.3 percent in grants and 36.7 percent in loans. In FY2004, total foreign aid committed was US$320 million, of which 37.7 percent was grants and 62.3 percent, loans. In June 2004, active World Bank credits totaled US$302 million, with the greatest portions allocated to the financial sector and to energy and mining. By the end of 2012, the outstanding World Bank IDA loan totaled $ 1.48 billion.

The Development Assistance Database (DAD) is an Aid Information Management System (AIMS) developed by Synergy International Systems, for tracking development aid and managing official development assistance with transparency and accountability. DAD is widely adopted AIMS which has been established in more than 35 countries worldwide in close cooperation with UNDP and respective governments.

The United States government first recognized the usefulness of foreign aid as a tool of diplomacy in World War II. It was believed that it would promote liberal capitalist models of development in other countries and that it would enhance national security. 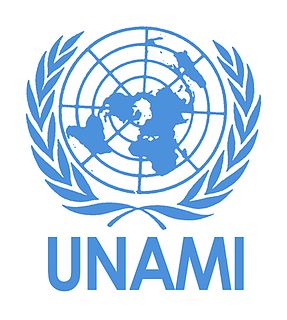 The United Nations Assistance Mission for Iraq (UNAMI) was formed by the United Nations Security Council (UNSC) Resolution 1500 on 14 August 2003 at the request of the Iraqi government to support national development efforts throughout the country.

Pakistan receives foreign aid from several countries and international organizations. Since the start of the War in Afghanistan, the majority of the aid comes from the United States via the Coalition Support Fund which is reimbursement to Pakistan for counter-terrorism operations. Foreign aid from America has been stopped since 2018.