Haddiscoe is a village and civil parish in the South Norfolk district of Norfolk, England, about 16 miles (26 km) southeast of Norwich. The parish is on the county boundary with Suffolk, about 7 miles (11 km) west-northwest of Lowestoft. The parish includes the hamlet of Thorpe-next-Haddiscoe, about 1 mile (1.6 km) north of Haddiscoe village. [1]

The toponym is derived from Old Norse. "Hadd" was someone's name, and the second part of the word is derived from the Norse word skōgr meaning "wood", so the place was "Hadd's wood". [3]

The local church in the village is dedicated to St. Mary and was originally constructed in the 15th century. The oldest part of the Church of England parish church of St Mary is the 11th-century west tower. [4] St Mary's is one of 124 round-tower churches in Norfolk. Inside the church are 14th-century murals including one of St Christopher carrying Jesus Christ. [4] Jan Pier Pier, a 16th-century Dutch immigrant and creator of some of the dykes surrounding the village, is buried in the nave.[ citation needed ] St Mary's is a Grade I listed building. [4]

In Thorpe-next-Haddiscoe is the Church of England parish church of St Matthias. It too has an 11th-century round tower. Its nave has a thatched roof, and its chancel was rebuilt in brick in 1838. St Matthias' is a Grade I listed building. [5]

Haddiscoe was in Clavering hundred. [6]

Haddiscoe was the site of Norfolk's only Knights Templar preceptory.[ citation needed ] It was dissolved in the 14th Century.

The Haddiscoe Hoard, the largest hoard of English Civil War coins found in Norfolk to date, was found on 17 July 2003 by a workman on a flood defence scheme.[ citation needed ]

Toft Monks mill is a disused windpump that used to drain the marshes into the River Waveney. [7]

Under the Poor Law Amendment Act 1834 Haddiscoe was in the Loddon and Clavering Union. [6]

A railway linking Reedham and Lowestoft was authorised in 1845 and opened by the Norfolk Railway in 1847. It passes through Haddiscoe parish, partly alongside the Haddiscoe Cut. The original Haddiscoe railway station was opened to serve it.

In 1862 the Norfolk Railway became part of the Great Eastern Railway, which in 1904 replaced the original Haddiscoe railway station with the present one. It is about 1 1⁄2 miles (2.4 km) from the centre of the village and is served by Wherry Lines trains linking Norwich and Lowestoft. 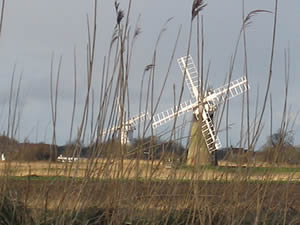 The Broads is a network of mostly navigable rivers and lakes in the English counties of Norfolk and Suffolk. The lakes, known as broads, were formed by the flooding of peat workings. The Broads, and some surrounding land, were constituted as a special area with a level of protection similar to a national park by the Norfolk and Suffolk Broads Act 1988. The Broads Authority, a special statutory authority responsible for managing the area, became operational in 1989. 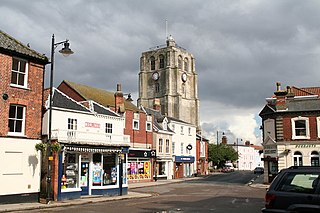 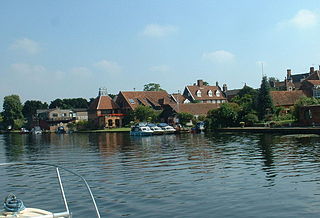 The River Waveney is a river which forms the boundary between Suffolk and Norfolk, England, for much of its length within The Broads. 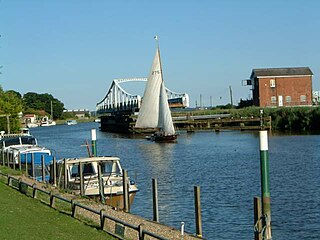 Reedham is a village and civil parish in the English county of Norfolk and within The Broads. It is on the north bank of the River Yare, some 12 miles (19 km) east of the city of Norwich, 7.5 mi (12.1 km) south-west of the town of Great Yarmouth and the same distance north-west of the Suffolk town of Lowestoft. 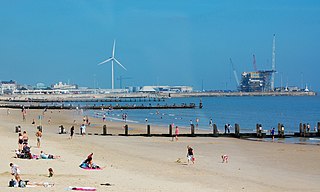 Lowestoft is an English North Sea coast town and civil parish in the county of Suffolk. On the edge of The Broads, it is the most easterly UK settlement, 110 miles (177 km) north-east of London, 38 miles (61 km) north-east of Ipswich and 22 miles (35 km) south-east of Norwich. As the main town in the district of East Suffolk, it had an estimated 73,775 inhabitants in 2018. A port town, it developed out of the fishing industry and as a seaside resort with wide, sandy beaches. As its fisheries declined, oil and gas exploitation in the southern North Sea in the 1960s added to its development, alongside nearby Great Yarmouth. These roles have declined, but it is developing as a regional centre of the renewable energy industry. 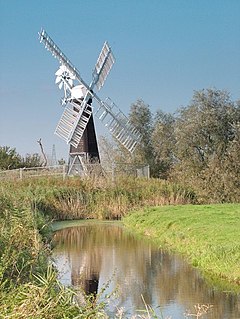 St Olaves is a village in the English county of Norfolk. The village is situated on the River Waveney, some 6 miles (10 km) south-west of the town of Great Yarmouth and the same distance north-west of the Suffolk town of Lowestoft. It is within The Broads National Park. 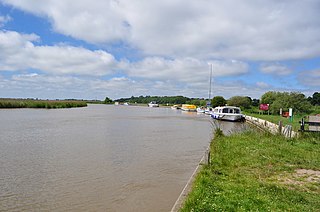 Somerleyton is a village of medieval origin and former civil parish in the English county of Suffolk, England. It is centred 4.5 miles (7 km) north-west of Lowestoft and 5.7 miles (9 km) south-west of Great Yarmouth. The land associated with the village is partly in The Broads National Park including its free moorings and marina on the River Waveney close to its public house. In 1961 the parish had a population of 377. Somerleyton is now in the civil parish of Somerleyton, Ashby and Herringfleet which maintains a village hall elsewhere and cricket ground and tennis court in the village. Other amenities include a village shop and a railway station. In 1987 the parish was merged with Ashby and Herringfleet to form "Somerleyton, Ashby and Herringfleet". 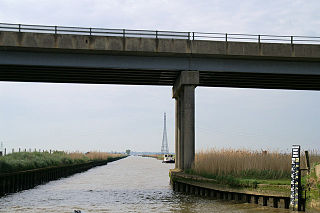 The Haddiscoe Cut or New Cut is a canal in the English county of Norfolk and in The Broads. The cut was conceived as a way to provide a more direct route from Lowestoft to Norwich, and was built as part of a larger scheme which included the linking of the River Waveney to Oulton Broad and Lake Lothing. It was opened in 1833, but the new route was not a financial success, and it was sold to a railway developer in 1842. It remained in railway ownership until Nationalisation in 1948, and was damaged by floods in 1953. An attempt to close it in 1954 was resisted by local interests, resulting in it being repaired. It is now managed by the Environment Agency. 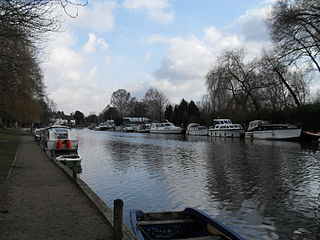 Halesworth is a small market town, civil parish and electoral ward in the northeastern corner of Suffolk, England. The population was measured at 4,726 in the 2011 Census. It is located 15 miles (24 km) south west of Lowestoft, and stands on a small tributary of the River Blyth, 9 miles (14 km) upstream from Southwold. The town is served by Halesworth railway station on the Ipswich–Lowestoft East Suffolk Line. Halesworth is twinned with both Bouchain in France and Eitorf in Germany.

Denton is a village and civil parish in the county of Norfolk, England. At the 2001 census it had a population of 352 inhabitants living in 149 dwellings, reducing to a population of 326 at the 2011 census,. Located on the southern edge of the county, Denton has an area of 10.11 km2 (3.90 sq mi). The nearest towns are Harleston and Bungay. To the south lies the river Waveney, to the west Alburgh, to the north Topcroft and Bedingham and to the east Earsham. 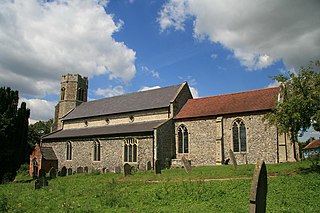 Billingford is a village and civil parish in the Breckland district of Norfolk, England, about 3 1⁄2 miles (5.6 km) north of East Dereham. The village is just north of the River Wensum, which forms the southern boundary of the parish. The village is on the B1145 road, which links King's Lynn and Mundesley. The 2011 Census recorded the parish population as 253. 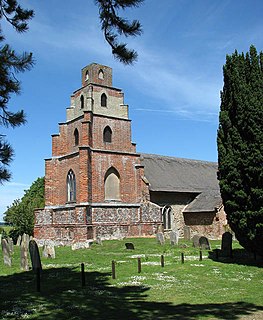 Burgh St Peter is a village and civil parish in the South Norfolk district of Norfolk, England. The village is about 3 1⁄2 miles (6 km) northeast of Beccles in Suffolk. The village is about 50 feet (15 m) above sea level, sharing the same slight hill with Wheatacre about 1⁄2 mile (800 m) to the northwest.

Toft Monks is a village and parish in Norfolk, England. It is located on the border of Norfolk and Suffolk about eleven miles southwest of Great Yarmouth and four miles north of Beccles. 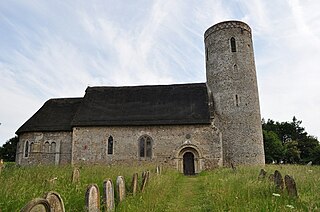 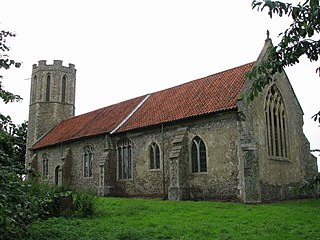 Buckenham is a small village in the English county of Norfolk situated on the northern bank of the River Yare around 7 miles (11 km) south-east of Norwich. The village is the location of the RSPB Buckenham Marshes nature reserve.

The Yarmouth–Beccles line was a railway line which linked the Suffolk market town of Beccles with the Norfolk coastal resort of Yarmouth. Forming part of the East Suffolk Railway, the line was opened in 1859 and closed 100 years later in 1959.