Hawaiian kinship, also referred to as the generational system, is a kinship system used to define family. Identified by Lewis H. Morgan in his 1871 work Systems of Consanguinity and Affinity of the Human Family, the Hawaiian system is one of the six major kinship systems (Eskimo, Hawaiian, Iroquois, Crow, Omaha, and Sudanese).[ citation needed ]

Lewis Henry Morgan was a pioneering American anthropologist and social theorist who worked as a railroad lawyer. He is best known for his work on kinship and social structure, his theories of social evolution, and his ethnography of the Iroquois. Interested in what holds societies together, he proposed the concept that the earliest human domestic institution was the matrilineal clan, not the patriarchal family.

The Hawaiian system is usually associated with ambilineal descent groups. It is found in approximately one third of the world's societies, although these are usually small societies. [1]

Hawaii is the 50th and most recent state to have joined the Union, having received statehood on August 21, 1959. Hawaii is the only U.S. state geographically located in Oceania, although it is governed as a part of North America, and the only one composed entirely of islands. It is the northernmost island group in Polynesia, occupying most of an archipelago in the central Pacific Ocean. 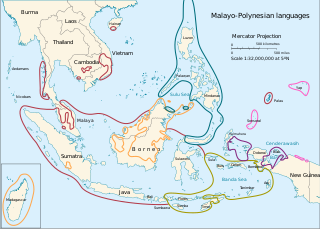 The Malayo-Polynesian languages are a subgroup of the Austronesian languages, with approximately 385.5 million speakers. The Malayo-Polynesian languages are spoken by the Austronesian people of the island nations of Southeast Asia and the Pacific Ocean, with a smaller number in continental Asia, going well into the Malay peninsula. Cambodia and Vietnam serve as the northwest geographic outlier. On the northernmost geographical outlier does not pass beyond the north of Pattani, which is located in southern Thailand. Malagasy is spoken in the island of Madagascar located off the eastern coast of Africa in the Indian Ocean. Part of the language family shows a strong influence of Sanskrit and Arabic as the western part of the region has been a stronghold of Hinduism, Buddhism and, later, Islam.

This form of kinship is frequent in societies with ambilineal descent groups, where economic production and child-rearing are shared.

Philippine kinship uses the generational system in kinship terminology to define family. It is one of the more simple classificatory systems of kinship. One's genetic relationship or bloodline is often overridden by the desire to show proper respect that is due in the Philippine culture to age and the nature of the relationship, which are considered more important.