Louise Lamphere (born 1940 [1] ) is an American anthropologist who has been distinguished professor of anthropology at the University of New Mexico since 2001. She was a faculty member at UNM from 1976–1979 and again from 1986–2009, when she became a professor emeritus.

Lamphere received her Ph.D. from Harvard in 1968. She has published extensively throughout her career on subjects as diverse as the Navajo and their medicinal practices and de-industrialisation and urban anthropology; nonetheless she is possibly best known for her work on feminist anthropology and gender issues. [2]

In 1977, Lamphere became an associate of the Women's Institute for Freedom of the Press (WIFP). [3] WIFP is an American nonprofit publishing organization. The organization works to increase communication between women and connect the public with forms of women-based media.

Lamphere was the co-editor, with Michele Zimbalist Rosaldo, of Woman, Culture, and Society, the first volume to address the anthropological study of gender and women's status. In the 1970s, after being denied tenure at Brown University, Lamphere brought a class action suit against Brown. She won an out-of-court settlement that served as a model for future suits by others. In 2015, Brown announced a series of events (including a symposium) examining the important impact of the suit and its settlement. [4]

In 2005 Lamphere supervised an ethnographic team which examined the impact of Medicaid managed care in New Mexico. The team published their articles in a special issue of Medical Anthropology Quarterly. In her introduction, she emphasized the impact of increased bureaucratization on women workers in health care clinics, emergency rooms and small doctors offices.

In 2013, she was awarded the Franz Boas Award for Exemplary Service to Anthropology from the American Anthropological Association.

On May 24, 2015 Brown University awarded Lamphere an honorary doctorate (honoris causa) for her "courage in standing up for equity and fairness for all faculty and [her] exemplary examinations of urban anthropology, healthcare practices and gender issues." [2]

In 2017, she was awarded the Bronislaw Malinowski award by The Society of Applied Anthropology. [7] [6] 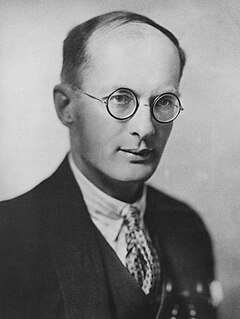 Camilla Hildegarde Wedgwood was a British anthropologist and academic administrator. She is best known for her research in the Pacific and her pioneering role as one of the British Commonwealth's first female anthropologists.

Sol Tax was an American anthropologist. He is best known for creating action anthropology and his studies of the Meskwaki, or Fox, Indians, for "action-anthropological" research titled the Fox Project, and for founding the academic journal Current Anthropology. He received his doctorate from the University of Chicago in 1935 and, together with Fred Eggan, was a student of Alfred Radcliffe-Brown.

The Ilongot are a tribe who inhabit the southern Sierra Madre and Caraballo Mountains, on the east side of Luzon in the Philippines, primarily in the provinces of Nueva Vizcaya and Nueva Ecija and along the mountain border between the provinces of Quirino and Aurora. An alternative name of this tribe and its language is "Bugkalot". They are known as a tribe of headhunters.

Michelle "Shelly" Zimbalist Rosaldo was a social, linguistic, and psychological anthropologist famous for her studies of the Ilongot people in the Philippines and for her pioneering role in women's studies and the anthropology of gender.

Terms such as separate spheres and domestic–public dichotomy refer to a social phenomenon, within modern societies that feature, to some degree, an empirical separation between a domestic or private sphere and a public or social sphere. This observation may be controversial and is often also seen as supporting patriarchal ideologies that seek to create or strengthen, any such separation between spheres and to confine women to the domestic/private sphere.

Madam Yoko or Mammy Yoko was a leader of the Mende people in Sierra Leone. Combining advantageous lineage, shrewd marriage choices and the power afforded her from the secret Sande society, Yoko became a leader of considerable influence. She expanded the Mende Kingdom and at the time of her death, she was the ruler of the vast Kpa Mende Confederacy.

Beatrice Medicine was a scholar, anthropologist, and educator known for her work in the fields of Indigenous languages, cultures, and history. Medicine spent much of her life researching, teaching, and serving Native communities, primarily in the fields of bilingual education, addiction and recovery, mental health, tribal identity, and women's, children's, and LGBT community issues. 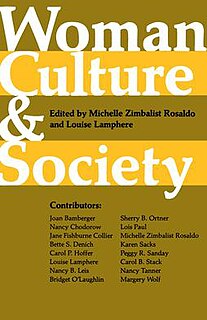 Woman, Culture, and Society, first published in 1974, is a book consisting of 16 papers contributed by female authors and an introduction by the editors Michelle Zimbalist Rosaldo and Louise Lamphere. On the heels of the 1960s feminist movement, this book challenged anthropology's status quo of viewing studied cultures from a male perspective while diminishing female perspectives, even considering women as comparatively imperceptible. It is considered to be a pioneering work.

Annette Barbara Weiner née Cohen was an American anthropologist, Kriser Distinguished Professor of Anthropology and dean of the Graduate School of Arts and Sciences at New York University. She was known for her ethnographic work in the Trobriand Islands and her development of the concept of inalienable wealth in social anthropological theory.

Patricia Zavella is an anthropologist and professor at the University of California, Santa Cruz in the Latin American and Latino Studies department. She has spent a career advancing Latina and Chicana feminism through her scholarship, teaching, and activism. She was president of the Association of Latina and Latino Anthropologists and has served on the executive board of the American Anthropological Association.

Women’s Institute for Freedom of the Press (WIFP) is an American nonprofit publishing organization that was founded in Washington,DC, in 1972. The organization works to increase communication between women and connect the public with forms of women-based media. WIFP operates as both a national and international feminist network.

Lucinda Ramberg is an American anthropologist whose work focuses on gender, sexuality, religion and health. She was awarded multiple prizes in 2015 for her first book, Given to the Goddess: South Indian Devadasis and the Sexuality of Religion. Ramberg is Associate Professor in Anthropology and Director of Graduate Studies in the Feminist, Gender, and Sexuality Studies program at Cornell University.

The Association for Feminist Anthropology (AFA), a section of the American Anthropological Association, is an American professional organization founded in 1988 to support the development of feminist analytic perspective in all areas of anthropology.