Social capital is the effective functioning of social groups through interpersonal relationships, a shared sense of identity, a shared understanding, shared norms, shared values, trust, cooperation, and reciprocity. Social capital is a measure of the value of resources, both tangible and intangible, and the impact that these relationships have on the resources involved in each relationship, and on larger groups. It is generally seen as a form of capital that produces public goods for a common purpose. 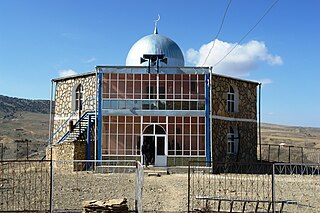 According to a 2009 Pew Research Center report, 93.1% of Turkmenistan's population is Muslim. Traditionally, the Turkmen of Turkmenistan, like their kin in Uzbekistan are Sunni Muslims. Shia Muslims, the other main branch of Islam, are not numerous in Turkmenistan, and the Shia religious practices of the Azerbaijani and Kurdish minorities are not politicized. The great majority of Turkmen readily identify themselves as Muslims and acknowledge Islam as an integral part of their cultural heritage, but some support a revival of the religion's status primarily as an element of national revival. 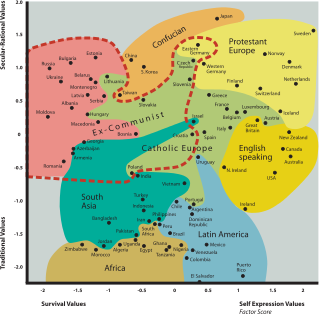 Ronald F. Inglehart is a political scientist and professor emeritus at the University of Michigan. He is director of the World Values Survey, a global network of social scientists who have carried out representative national surveys of the publics of over 100 societies on all six inhabited continents, containing 90 percent of the world's population. The first wave of surveys for this project was carried out in 1981 and the latest wave was completed in 2019. Since 2010 Inglehart has also been co-director of the Laboratory for Comparative Social Research at the National Research University - Higher School of Economics in Moscow and St Petersburg. This laboratory has carried out surveys in Russia and eight ex-Soviet countries and is training PhD-level students in quantitative cross-national research methods.

Tigrayans are an ethnic group in the Tigray Region in northern Ethiopia. They speak the Tigrinya language.

Tongkonan is the traditional ancestral house, or Rumah adat of the Torajan people, in South Sulawesi, Indonesia. Tongkonan have a distinguishing boat-shaped and oversized saddleback roof. Like most of Indonesia's Austronesian-based traditional architecture, tongkonan are built on piles. The construction of tongkonan is laborious work and it is usually built with the help of all family members or friends. In the original Toraja society, only nobles had the right to build tongkonan. Commoners live in smaller and less decorated homes called banua.

The Papuans are one of four major cultural groups of Papua New Guinea. The majority of the population lives in rural areas. In isolated areas there still remains a handful of the giant communal structures that previously housed the whole male population, with a circling cluster of huts for the women. The Papuan people are Melanesian people composed of at least 240 different peoples, each with its own language and culture. Sago is the staple food of the Papuan supplemented with hunting, fishing and small gardens.

The Mongo people are a Bantu ethnic group who live in the equatorial forest of Central Africa. They are the second largest ethnic group in the Democratic Republic of Congo, highly influential in its north region. A diverse collection of sub-ethnic groups, they are mostly residents of a region north of the Kasai and the Sankuru Rivers, south of the main Congo River bend. Their highest presence is in the province of Équateur and the northern parts of the Bandundu Province.

The official religion in Bhutan is Vajrayana Buddhism, which is practiced by 75% of the population. Bhutan is a Buddhist country by constitution and Buddhism plays a vital role in the country. Buddhism is the cultural heritage of Bhutan and its people's identity as well. Freedom of religion is guaranteed by the King. Approximately 75 percent of the population of 770,000 follow either the Drukpa Lineage of the Kagyu school, the Nyingma school of Tibetan Buddhism or another school of Buddhism. The remaining 25 percent, mainly Lhotshampas, practice Hinduism.

Christianity is the largest religion in Ghana, with approximately 71.2% of Ghana's population being member of various Christian denominations as of 2010 census. The religious composition of Ghana in the first postindependence population census of 1960 was 25 percent Muslim, 23 percent traditionalist, 41 percent Christian, and the rest other. A breakdown of the 1960 population according to Christian sects showed that 25 percent were Protestant (non-Pentecostal); 13 percent, Roman Catholic; 2 percent, Protestant (Pentecostal); and 1 percent, Independent African Churches. The 1970 population census did not present figures on the religious composition of the nation. 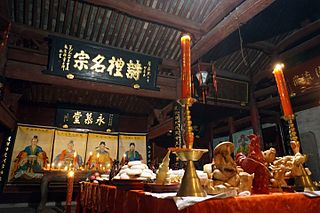 Chinese ancestor worship or Chinese ancestor veneration, also called the Chinese patriarchal religion, is an aspect of the Chinese traditional religion which revolves around the ritual celebration of the deified ancestors and tutelary deities of people with the same surname organised into lineage societies in ancestral shrines. Ancestors, their ghosts, or spirits, and gods are considered part of "this world", that is, they are neither supernatural nor transcendent in the sense of being beyond nature. The ancestors are humans who have become godly beings, beings who keep their individual identities. For this reason, Chinese religion is founded on veneration of ancestors. Ancestors are believed to be a means of connection to the supreme power of Tian as they are considered embodiments or reproducers of the creative order of Heaven. 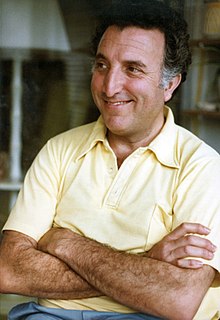 Melvin Lawrence Ember was an American cultural anthropologist and cross-cultural researcher with wide-ranging interests who combined an active research career with writing for nonprofessionals.