Unlike blood relationships (consanguinity), which may have genetic consequences, affinity is essentially a social or moral construct, at times backed by legal consequences.

In law, affinity may be relevant in relation to prohibitions on incestuous sexual relations and in relation to whether particular couples are prohibited from marrying. Which relationships are prohibited vary from jurisdiction to jurisdiction, and have varied over time. In some countries, especially in the past, the prohibited relationships were based on religious laws. In some countries, the prohibition on sexual relations between persons in an affinity relationship may be expressed in terms of degrees of relationship. The degree of affinity is considered the same as the consanguineal level a couple was joined, so that, for example, the degree of affinity of a husband to his sister-in-law is two, the same as the wife would be to her sister on the basis of consanguinity. The degree to the wife’s parent or child is one, and to an aunt or niece it is three, and first cousin it is four. Though adoption and step relationships are cases of affinity, they are normally treated as consanguinity.

In law, affinity relatives by marriage are known as affines.

More commonly, they are known as in-laws or family-in-law, with affinity being usually signified by adding "-in-law" to a degree of kinship. This is standard for the closest degrees of kinship, such as father-in-law , daughter-in-law , brother/sister-in-law, etc., but is frequently omitted in the case of more extended relations. As uncle and aunt are frequently used to refer indifferently to friends of the family, the terms may be used without specifying whether the person is a cognate or affine. Similarly, the spouse of a cousin may not be called a relation at all or may be referenced as a "cousin by marriage".

In South Africa, sexual relations are prohibited within the first degree of affinity, that is, where one person is the direct ancestor or descendant of the spouse of the other person. [1]

Brazilian law, by the Article 1521 of the Civil Code, also extends the invalidity of marriage between parents and children to grandparents and grandchildren or any other sort of ascendant-descendant relationship (both consanguineous and adoptive), parents-in-law and children-in-law even after the divorce of the earlier couple, as well as to stepparents and stepchildren, and former husbands or wives to an adoptive parent who did this unilaterally (regarded as an equivalent, in families formed by adoption, to stepparents and stepchildren); and extends the invalidity of marriage between siblings to biological cousin-siblings. [2] [3]

In Hawaii, sexual penetration and marriage is prohibited within close degrees affinity and is punishable by up to 5 years. [4]

In Michigan, sexual contact between persons related "by blood or affinity to the third degree" are chargeable as criminal sexual conduct in the 4th degree and punishable by a 2-year sentence or a fine of up to $500 or both. [5]

In New Jersey, sexual contact is prohibited when the actor is "related to the victim by blood or affinity to the 3rd degree" and the victim is at least 16 but less than 18 years old. [6] 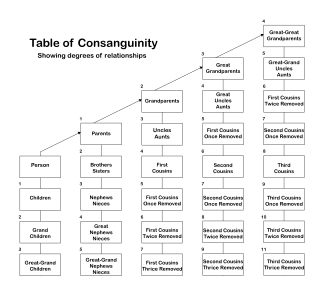 Article 809 of the Korean Civil Code was the codification of a traditional rule prohibiting marriage between men and women who have the same surname and ancestral home (bon-gwan). On 16 July 1997, the Constitutional Court of Korea ruled the article unconstitutional. The National Assembly of South Korea passed an amendment to the Article in March 2002, which came into force on 31 March 2005, and prohibited marriage only between men and women who are closely related. 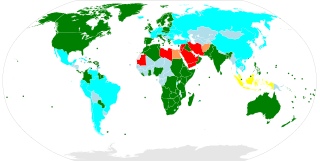 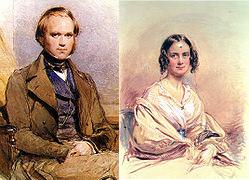 In human society, a family is a group of people related either by consanguinity or affinity. The purpose of families is to maintain the well-being of its members and of society. Ideally, families would offer predictability, structure, and safety as members mature and participate in the community. In most societies, it is within families that children acquire socialization for life outside the family. Additionally, as the basic unit for meeting the basic needs of its members, it provides a sense of boundaries for performing tasks in a safe environment, ideally builds a person into a functional adult, transmits culture, and ensures continuity of humankind with precedents of knowledge.

Adoption in the Philippines is a process of granting social, emotional and legal family and kinship membership to an individual from the Philippines, usually a child. It involves a transfer of parental rights and obligations and provides family membership. The Department of Social Welfare and Development (DSWD) defines adoption as a "socio-legal process of giving a permanent family to a child whose parents have voluntarily or involuntarily given up their parental rights."