Bilateral descent is a system of family lineage in which the relatives on the mother's side and father's side are equally important for emotional ties or for transfer of property or wealth. It is a family arrangement where descent and inheritance are passed equally through both parents. [1] Families who use this system trace descent through both parents simultaneously and recognize multiple ancestors, but unlike with cognatic descent it is not used to form descent groups. [2]

While bilateral descent is increasingly the norm in Western culture, traditionally it is only found among relatively few groups in West Africa, India, Australia, Indonesia, Melanesia, Malaysia, the Philippines, and Polynesia. Anthropologists believe that a tribal structure based on bilateral descent helps members live in extreme environments because it allows individuals to rely on two sets of families dispersed over a wide area. [3]

Under bilateral descent, every tribe member belongs to two clans, one through the father (a patriclan) and another through the mother (a matriclan). For example, among the Himba, clans are led by the eldest male in the clan. Sons live with their father's clan and when daughters marry they go to live with the clan of their husband. However inheritance of wealth does not follow the patriclan but is determined by the matriclan i.e. a son does not inherit his father's cattle but his maternal uncle's instead. [3] [ dead link ]

The Dimasa Kachari people of Northeast India has a system of dual family clan. The Urapmin people, a small tribe in Papua New Guinea, have a system of kinship classes known as tanum miit. The classes are inherited bilaterally from both parents. Since they also practice strict endogamy, most Urapmin belong to all of the major classes, creating great fluidity and doing little to differentiate individuals. [6] 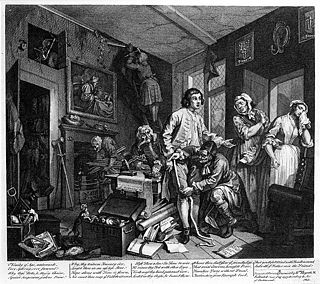 Inheritance is the practice of passing on private property, titles, debts, rights, and obligations upon the death of an individual. The rules of inheritance differ among societies and have changed over time.

Matrilineality is the tracing of kinship through the female line. It may also correlate with a social system in which each person is identified with their matriline – their mother's lineage – and which can involve the inheritance of property and/or titles. A matriline is a line of descent from a female ancestor to a descendant in which the individuals in all intervening generations are mothers – in other words, a "mother line". In a matrilineal descent system, an individual is considered to belong to the same descent group as their mother. This ancient matrilineal descent pattern is in contrast to the currently more popular pattern of patrilineal descent from which a family name is usually derived. The matriline of historical nobility was also called their enatic or uterine ancestry, corresponding to the patrilineal or "agnatic" ancestry. 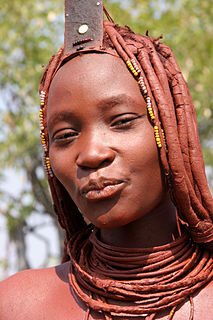 The Himba are indigenous peoples with an estimated population of about 50,000 people living in northern Namibia, in the Kunene Region and on the other side of the Kunene River in southern Angola. There are also a few groups left of the OvaTwa, who are also OvaHimba, but are hunter-gatherers. However, the OvaHimba do not like to be associated with OvaTwa. Culturally distinguishable from the Herero people, the OvaHimba are a semi-nomadic, pastoralist people and speak OtjiHimba, a variety of Herero, which belongs to the Bantu family within Niger–Congo. The OvaHimba are semi-nomadic as they have base homesteads where crops are cultivated, but may have to move within the year depending on rainfall and where there is access to water.

A clan is a group of people united by actual or perceived kinship and descent. Even if lineage details are unknown, clan members may be organized around a founding member or apical ancestor. Clans, in indigenous societies, tend to be exogamous, meaning that their members cannot marry one another. Clans preceded more centralized forms of community organization and government, and exist in every country. Members may identify with a coat of arms or other symbol to show that they are an independent clan. The kinship-based bonds may also have a symbolic ancestor, whereby the clan shares a "stipulated" common ancestor that is a symbol of the clan's unity. When this "ancestor" is non-human, it is referred to as a totem, which is frequently an animal.

The Korowai, also called the Kolufo, are the people who live in South eastern West Papua in the Indonesian province of Papua, close to the border with Papua New Guinea. They number about 3,000.

Parentado is a principle of kinship tie that was practiced in early Modern Europe. It is Italian for kin. It suggests power that is gained through the alliance of marriage, along with the exchange of dowries and women. Parentado stresses the key role of women in creating kinship ties. This is markedly different from the opposing term casato which places emphasis on kinship tie that descends from fathers to sons respectively.

The Urapmin people are an ethnic group numbering about 375 people in the Telefomin District of the West Sepik Province of Papua New Guinea. One of the Min peoples who inhabit this area, the Urapmin share the common Min practices of hunter-gatherer subsistence, taro cultivation, and formerly, an elaborate secret cult available only to initiated men.

Hazairin was the Indonesia's Minister of Home Affairs from 30 July 1953 to 18 November 1954, serving in the First Ali Sastroamidjojo Cabinet.

Teiwa is a Papuan language spoken on the Pantar island in eastern Indonesia. The island is the second largest in the Alor archipelago, lying just west of the largest island Alor.