Polyandry in India refers to the practice of polyandry, whereby a woman has two or more husbands at the same time, either historically on the Indian subcontinent or currently in the country of India. An early example can be found in the Hindu epic Mahabharata , in which Draupadi, daughter of the king of Panchala, is married to five brothers. [1]

Polyandry was mainly prevalent in the Kinnaur Region, a part of Himachal in India which is close to the Tibet or currently the Indo-China border. As mentioned in the epic Mahabharata, the Pandavas were banished from their kingdom for thirteen years and they spent the last year hiding in this hilly terrain of Kinnaur. A minority of the Kinaauris still claim to be descendants of the Pandavas[ citation needed ] and thus justify the practice of polyandry. However, this is a debatable issue as Kinnauris existed long before the Pandavas as mentioned in the epic.

Apart from Kinnaur, polyandry was practised in South India among the Todas tribes of Nilgiris, Nanjanad Vellala of Travancore. [2] and some Nair castes. While polyandrous unions have disappeared from the traditions of many of the groups and tribes, it is still practiced by some Paharis, especially in the Jaunsar-Bawar region in Northern India.

Recent years have seen the rise in fraternal polyandry in the agrarian societies in Malwa region of Punjab to avoid division of farming land. [3]

Polyandry is in practice in many villages of Kinnaur district of Himachal Pradesh. Fraternal polyandry (where husbands are related to each other) is mainly in practice in villages, where the societies are male dominated and which still follow ancient rituals and customs.

There are many forms of polyandry which can be found here. Most often, all the brothers are married to a woman and sometimes the marriage to brothers happens at a later date. The wife can only ascertain the blood-relationship of the children, though recently there have been a few instances of paternity tests using DNA samples to resolve inheritance disputes. The rules for breaking the marriage are strict and a brother going against the marriage agreement can be treated as an outcast while losing his entire share in the property.

The territory of Kinnaur remained forbidden for many years as the land route was only established 30 years ago.[ clarification needed ]

The males who shared one or two wives were almost always full or half-brothers. [5] A Toda woman when married was automatically married to her husband's brothers. [6] When the wife became pregnant, one husband would ceremonially give a bow and arrow to the wife, and would be the father of that child. When the next child arrived, another husband would perform the ceremony and become the father. [7] [ clarification needed ]

Polyandry and polygamy were prevalent in Kerala till the late 19th century and isolated cases were reported until the mid-20th century. Castes practicing polyandry were Nairs, Thiyyas, Ezhavas, Kammalans and a few of the artisan castes. [8] [9] [10] [11] [12] [13]

In the case of Nairs and other related castes, a man's property is inherited by his sister's children and not his own. [14] Under Nair polyandry, the only conceivable blood-relationship could be ascertained through females. [15] However, polyandry among Nairs is a contested issue with opinion divided between ones who support its existence [16] [17] and ones who do not support it based on the fact that no stable conjugal relationship is formed in Nair polyandry. [18] Ezhavas of Kerala also practised polyandry. The custom of Fraternal polyandry was common among Thiyyas of Malabar. According to Cyriac Pullipally, some female members of the Thiyya community associated with English men as their concubines. [19]

Polyandry was practised in Jaunsar-Bawar in Uttarakhand. [20] A distinct group of people called Paharis live in the lower ranges of Himalayas in Northern India from southeastern Kashmir all the way through Nepal. Polyandry has been reported among these people in many districts but studied in great detail in Jaunsar-Bawar. It is a region in Dehradun district in Uttarakhand. The practice is believed to have descended from their ancestors who had earlier settled down in the plains from Himalayas. [21]

Polyandrous union occurs in this region when a woman marries the eldest son in a family. The woman automatically becomes the wife of all his brothers upon her marriage. The brothers can be married to more than one woman if the first woman was sterile or if the age difference of the brothers were large. The wife is shared equally by all brothers and no one in the group has exclusive privilege to the wife. The woman considers all the men in the group her husband and the children recognise them all as their father. [22] [23] 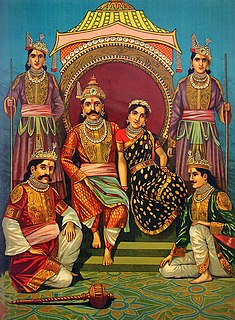 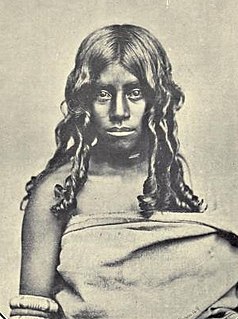 Toda people are a Dravidian ethnic group who live in the Nilgiri Mountains of the Indian state of Tamil Nadu. Before the 18th century and British colonisation, the Toda coexisted locally with other ethnic communities, including the Kota, Badaga and Kurumba, in a loose caste-like society, in which the Toda were the top ranking. During the 20th century, the Toda population has hovered in the range 700 to 900. Although an insignificant fraction of the large population of India, since the early 19th century the Toda have attracted "a most disproportionate amount of attention because of their ethnological aberrancy" and "their unlikeness to their neighbours in appearance, manners, and customs." The study of their culture by anthropologists and linguists proved significant in developing the fields of social anthropology and ethnomusicology.

Group marriage is a marriage-like arrangement where three or more adults live together, all considering themselves partners, sharing finances, children, and household responsibilities. Group marriage is considered a form of polyamory. The term does not refer to bigamy as no claim to being married in formal legal terms is necessary. 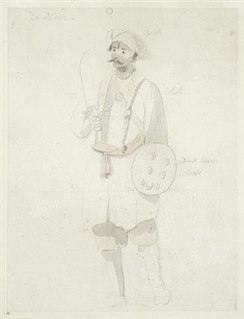 The Nair, also known as Nayar, are a group of Indian Hindu castes, described by anthropologist Kathleen Gough as "not a unitary group but a named category of castes". The Nair include several castes and many subdivisions, not all of whom historically bore the name 'Nair'. These people lived, and continue to live, in the area which is now the Indian state of Kerala. Their internal caste behaviours and systems are markedly different between the people in the northern and southern sections of the area, although there is not very much reliable information on those inhabiting the north.

Polyandry is a rare marital arrangement in which a woman has several husbands. In Tibet, those husbands are often brothers; "fraternal polyandry". Concern over which children are fathered by which brother falls on the wife alone. She may or may not say who the father is because she does not wish to create conflict in the family or is unsure who the biological father is. Historically the social system compelled marriage within a social class. 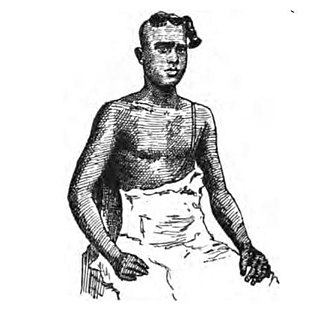 The Nambudiri, also transliterated Nambūdiri, Namboodiri, Namboothiri, and Nampūtiri, are a Malayali Brahmin caste, native to what is now the state of Kerala, India.

Jaunsar-Bawar is a hilly region in Uttarakhand, northern India. It is located in the north-west of Dehradun district, along the border with the state of Himachal Pradesh.

In 1896, the government of Madras passed the Malabar Marriage Act in response to the recommendations of the Malabar Marriage Commission of 1891. This allowed members of any caste practising marumakkatayam (matriliny) in Malabar to register a sambandham as a marriage. It was permissive rather than restrictive law: whether or not a relationship was registered was entirely the decision of the people involved in that relationship.

The Ezhavas are a community with origins in the region of India presently known as Kerala, where in the 2010s they constituted about 23% of the population and were reported to be the largest Hindu community. They are also known as Ilhava, Irava, Izhava and Erava in the south of the region; as Chovas, Chokons and Chogons in Central Travancore; and as Thiyyar, Tiyyas and Theeyas in the Malabar region. Some are also known as Thandan, which has caused administrative difficulties due to the presence of a distinct caste of Thandan in the same region. The Malabar Thiyyar group have claimed a higher ranking in the Hindu caste system than do the others, although from the perspective of the colonial and subsequent administrations they were treated as being of similar rank. 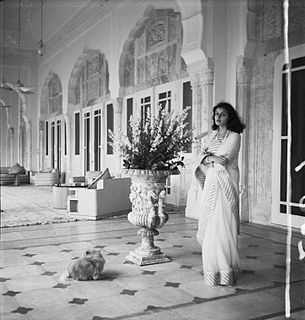 Polygamy in India is outlawed. While polygamy was not prohibited in Ancient India and it was common among aristocrats and emperors, it is believed that it was not a major cultural practice. The lack of prohibition was in part due to the separation between land laws and religion, and partially since all of the major religions of India portrayed polygamy in a neutral light.

There are numerous ceremonies and customs adopted by the Nair caste, who are prominent in the South Indian state of Kerala.

Polygamy is legal in Bhutan regarding the consent of future wives. There is no legal recognition granted to polygamous spouses under civil law of Bhutan or customary law. Women in Bhutan may by custom be married to several husbands, however they are allowed only one legal husband. The legal status of married couples among polygamous and polyandrous households impacts the division of property upon divorce and survivorship, as well as general admissibility of the marital relationship in courts.

Vaikom Satyagraha (1924–25) was a satyagraha in erstwhile Travancore against untouchability and caste discrimination in Hindu society of Kerala. The movement was centered around the Sri Mahadeva Temple temple at Vaikom, in the present day Kottayam district. The Satyagraha was aimed at securing freedom to all sections of society to pass through the public roads leading to the Sri Mahadeva Temple.

Aasaan or Asan is a Malayalam/Tamil word meaning teacher or guide. 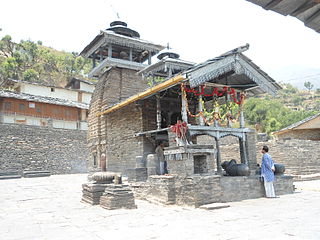 Lakhamandal is an ancient Hindu temple complex, situated in the Jaunsar-Bawar region of Dehradun district in the state of Uttarakhand. The temple is dedicated to lord Shiva. This temple is popular among the Shakti Cult, who believe that a visit to this temple shrine will end their misfortunes.

The Reformation movement in Kerala refers to a socio-cultural movement that began towards the end of 19th century and led to large scale changes in the social outlook of the southern Indian state of Kerala.