A husky is a sled dog used in the polar regions. One can differentiate huskies from other dog types by their fast pulling-style. They represent an ever-changing crossbreed of the fastest dogs [1] (the Alaskan Malamute, by contrast, pulled heavier loads at a slower speed). [2] Humans use huskies in sled-dog racing. Various companies have marketed tourist treks with dog sledges for adventure travelers in snow regions. [3] Huskies are also kept as pets, and groups work to find new pet homes for retired racing and adventure-trekking dogs. [4]

The word husky originated from the word referring to aboriginal Arctic people, in general, Eskimo, "...known as 'huskies', a contraction of 'Huskimos', the pronunciation given to the word 'Eskimos' by the English sailors of trading vessels." [5] The use of husky is recorded from 1852 for dogs kept by Inuit people. [6]

Nearly all dogs' genetic closeness to the gray wolf is due to admixture. [7] However, several Arctic breeds also show a genetic closeness with the now-extinct Taimyr wolf of North Asia due to admixture: the Siberian Husky and Greenland Dog (which are also historically associated with Arctic human populations) and to a lesser extent, the Shar Pei and Finnish Spitz. An admixture graph of the Greenland Dog indicates a best-fit of 3.5% shared material; however, an ancestry proportion ranging between 1.4% and 27.3% is consistent with the data and indicates admixture between the Taimyr wolf and the ancestors of these four high-latitude breeds.

This introgression could have provided early dogs living in high latitudes with phenotypic variation beneficial for adaption to a new and challenging environment, contributing significantly to the development of the husky. It also indicates that the ancestry of present-day dog breeds descends from more than one region. [8]

Huskies are energetic and athletic. They usually have a thick double coat that can be gray, black, copper red, or white. [9] . The double coat generally protects huskies against harsh winters and, contrary to what most believe, they can survive in hotter climates. During the hotter climates, huskies tend to shed their undercoat regularly to cool their bodies. In addition to shedding, huskies control their eating habits based on the season; in cooler climates, they tend to eat generous amounts, causing their digestion to generate heat, whilst in warmer climates, they eat less. [10] Their eyes are typically pale blue, although they may also be brown, green, blue, yellow, or heterochromic. Huskies are more prone to some degree of uveitis than most other breeds. [11]

Examples of these landraces in modern times have been selectively bred and registered with various kennel clubs as modern purebred breeds, including the Siberian Husky and the Labrador Husky. The Sakhalin Husky is a extinct Japanese sled dog related to the Japanese Spitz and the Akita.

The Mackenzie River husky is a dog subtype referring to different dog populations in the subarctic regions of the American state of Alaska and Canada.

The Alaskan husky is not considered a pure breed, but is instead another dog subtype. It is defined only by its purpose, which is that of a highly efficient sled dog.

Since many owners now have huskies as pets in settings that are not ideal for sledding, other activities have been found that are good for the dog and fun for the owner. 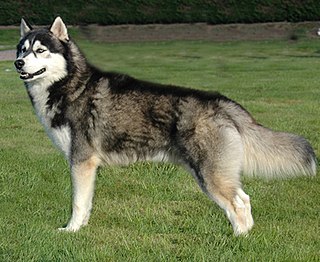 The Siberian Husky is a medium-sized working dog breed. The breed belongs to the Spitz genetic family. It is recognizable by its thickly furred double coat, erect triangular ears, and distinctive markings, and is smaller than a very similar-looking dog, the Alaskan Malamute. 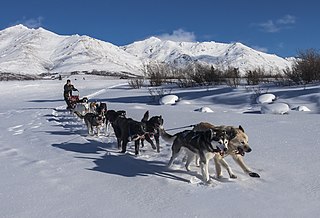 Sled dogs have been used in the Arctic for at least 9,000 years and were important for transportation in Arctic areas until the introduction of semi-trailer trucks, snowmobiles and airplanes in the 20th century, hauling supplies in areas that were inaccessible by other methods. They were used with varying success in the explorations of both poles, as well as during the Alaskan gold rush. Sled dog teams delivered mail to rural communities in Alaska, Yukon, Northwest Territories and Nunavut. Sled dogs today are still used by some rural communities, especially in areas of Alaska and Canada as well much of Greenland. They are used for recreational purposes and racing events, such as the Iditarod Trail and the Yukon Quest. 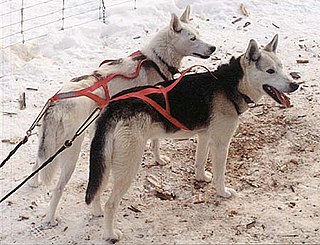 A rare working dog breed, the Seppala Siberian Sleddog is developed for the purpose of pulling a sled in cold countries. It is a moderate-sized dog averaging 18 to 23 kg weight and 56 to 58 cm height. Colours and markings are considered of little importance; eyes may be brown, blue or any combination of the two colours. Seppalas are active and energetic but very docile and trainable. 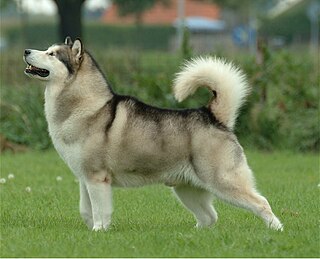 The Alaskan Malamute is a large breed of domestic dog originally bred for their strength and endurance to haul heavy freight as a sled dog and hound. They are similar to other arctic, husky, and spitz breeds such as the Greenland Dog, Canadian Eskimo Dog, the Siberian Husky, and the Samoyed. 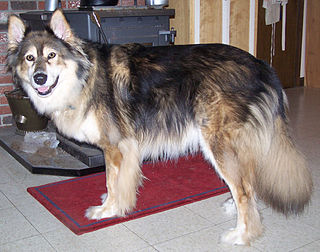 The term Mackenzie River husky describes several overlapping local populations of Arctic and sub-Arctic sled dog-type dogs, none of which constitutes a breed. Most prominent and current of these are the sled dogs of Donna Dowling and others in the interior of the American state of Alaska. These dogs are described as standing 26 to 29 inches in height and weighing 63 to 104 pounds. Usually long-coated, they are rangy, deep-chested and long-legged, built for heavy freighting in single file through deep snow. Their colors are the usual northern-dog range of black and white, shades of grey and sable, tan, blond, and red.

A dog sled or dog sleigh is a sled pulled by one or more sled dogs used to travel over ice and through snow. Numerous types of sleds are used, depending on their function. They can be used for dog sled racing. In Greenland the dogs pull in a fan shape in front of the sled, while in other regions, such as Alaska and Canada the dogs pull side by side in pairs. 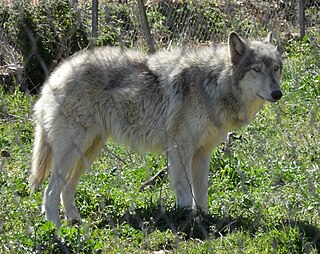 A wolfdog is a canine produced by the mating of a domestic dog with a gray wolf, eastern wolf, red wolf, or Ethiopian wolf to produce a hybrid.

A Finnish Spitz is a breed of dog originating in Finland. The breed was originally bred to hunt all types of game from squirrels and other rodents to bears. It is a "bark pointer", indicating the position of game by barking, and drawing the game animal's attention to itself, allowing an easier approach for the hunter. Its original game hunting purpose was to point to game that fled into trees, such as grouse, and capercaillies, but it also serves well for hunting elk. Some individuals have even been known to go after a bear. In its native country, the breed is still mostly used as a hunting dog. The breed is friendly and in general loves children, so it is suitable for domestic life. The Finnish Spitz has been the national dog of Finland since 1979.

The Greenland Dog is a large breed of husky-type dog kept as a sled dog. They were brought from Siberia to North America by the Thule people 1,000 years ago, along with the Canadian Eskimo Dog that is genetically identical. 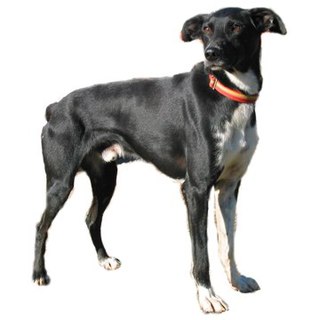 A Eurohound is a type of dog bred for sled dog racing. The Eurohound is typically crossbred from the Alaskan husky group and any of a number of pointing breeds ("pointers"). 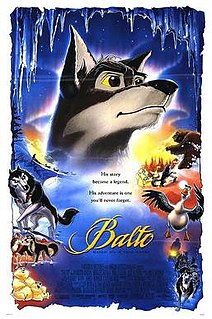 Balto is a 1995 British-American live-action/animated adventure film directed by Simon Wells, produced by Amblin Entertainment and distributed by Universal Pictures. The film is loosely based on a true story about the dog of the same name who helped save children infected with diphtheria in the 1925 serum run to Nome. The film stars Kevin Bacon, Bridget Fonda, Jim Cummings, Phil Collins and Bob Hoskins, with Miriam Margolyes in the live-action sequences. The live-action portions of the film were shot in New York City's Central Park. 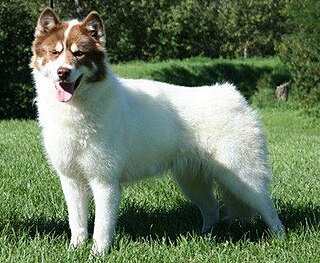 The Canadian Eskimo Dog or Canadian Inuit Dog is an Arctic breed of working dog. Other names include qimmiq or qimmit. The Greenland Dog is genetically identical. 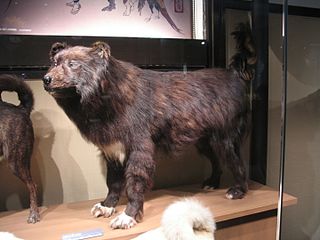 The Sakhalin Husky, also known as the Karafuto Ken (樺太犬), is a breed of dog formerly used as a sled dog, but now nearly extinct. As of 2015, there were only 7 of these huskies left on their native Sakhalin island.

The West Siberian Laika or WSL, is a breed of hunting dog and a breed of spitz type. Russian publications indicate that the term West Siberian Laika loosely applied to hunting dogs originating with the Mansi and Khanty people in Ural and West Siberia, but there were no standards or registrations of WSL as such until 1930. Then WWll disrupted it for a while, but systematic breeding with registrations resumed after the war ended, in 1946. This was the time the breed began taking modern shape. Before that hunters only knew of Mansi Laika and Khanty Laika. In early 1960 many hunters in Ural still preferred the term Mansi Laika, when speaking of West Siberian Laika. In Russian language, the term Laika originated from the word layat that means to bark. The word Laika simply means barker. Any hunting Laika is a bark pointer. It is a versatile dog depending on use and environment, but in certain parts of the country they have become more specialized.

Laika is a type of hunting dog of Northern Russia and Russian Siberia, and is a generic name for several breeds. Laika is also the given name for the mongrel who was the first dog in space.

The Northern Inuit Dog, along with its offshoot breed lines the Tamaskan dog, the British Timber dog and the Utonagan, is a breed of dog developed from a 1980s breeding project in the United Kingdom with the objective of producing a dog breed that resembles wolves.

Zhokhov Island is an island in the East Siberian Sea, situated 128 km north east of Novaya Sibir Island, the easternmost of the New Siberian Islands. Administratively the island belongs to the Yakutia administrative division of Russia. 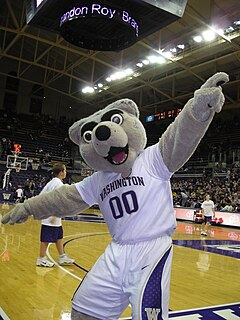 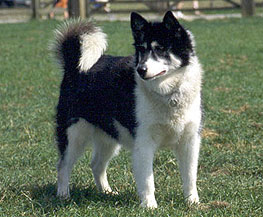 Native American dogs were dogs living with people indigenous to the Americas. Arriving about 10,000 years ago, they are now almost completely extinct except for a small handful of breeds such as Chihuahuas, Alaskan Malamutes, Greenland Dogs,the Peruvian Hairless Dog, the Xoloitzcuintle and possibly the Carolina Dog.