Last updated December 21, 2020
Not to be confused with Herding dog.
This article is about role of dogs in livestock protection. For dogs in a broader property protection role, see Guard dog.

A livestock guardian dog (LGD) is a dog type bred for the purpose of protecting livestock from predators.

Livestock guardian dogs stay with the group of animals they protect as a full-time member of the flock or herd. [1] Their ability to guard their herd is mainly instinctive, as the dog is bonded to the herd from an early age. [2] Unlike herding dogs which control the movement of livestock, LGDs blend in with them, watching for intruders within the flock. The mere presence of a guardian dog is usually enough to ward off some predators, and LGDs confront predators by vocal intimidation, barking, and displaying very aggressive behavior. The dog may attack or fight with a predator if it cannot drive it away. [3]

The use of dogs in protecting livestock originated over 2,000 years ago, [4] with their use being recorded as early as 150 BC in Rome. [5] Both Aristotle's History of Animals and Virgil's Georgics mention the use of livestock guardian dogs by the Molossians in the ancient region of Epirus. [6] [7]

The dogs are introduced to livestock as puppies so they "imprint" on the animals. Experts recommend that the pups begin living with the herd at 4 to 5 weeks of age. [1] This imprinting is thought to be largely olfactory and occurs between 3 and 16 weeks of age. Training requires regular daily handling and management, preferably from birth. A guardian dog is not considered reliable until it is at least 2 years of age. Until that time, supervision, guidance, and correction are needed to teach the dog the skills and rules it needs to do its job. Having older dogs that assist in training younger dogs streamlines this process considerably.

Trials are underway to protect penguins with LGDs. [8]

In Namibia in Southwest Africa, Anatolians are used to guard goat herds from cheetahs, and are typically imprinted between 7 and 8 weeks of age. Before use of dogs was implemented, impoverished Namibian farmers often came into conflict with predatory cheetahs; now, Anatolians usually are able to drive off cheetahs with their barking and displays of aggression. [9]

The three qualities most sought after in LGDs are trustworthiness, attentiveness, and protectiveness; trustworthy in that they do not roam off and are not aggressive with the livestock, attentive in that they are situationally aware of threats by predators, and protective in that they attempt to drive off predators. Dogs, being social creatures with differing personalities, take on different roles with the herd and among themselves; most stick close to the livestock, others tend to follow the shepherd or rancher when one is present, and some drift away from the livestock. These differing roles are often complementary in terms of protecting livestock, and experienced ranchers and shepherds sometimes encourage these differences by adjustments in socialization technique so as to increase the effectiveness of their group of dogs in meeting specific predator threats. LGDs that follow the livestock closest assure that a guard dog is on hand if a predator attacks, while LGDs that patrol at the edges of a flock or herd are in a position to keep would-be attackers at a safe distance from livestock. Those dogs that are more attentive tend to alert those that are more passive, but perhaps also more trustworthy or less aggressive with the livestock.

At least two dogs may be placed with a flock or herd, depending on its size, the type of predators, their number, and the intensity of predation. If predators are scarce, one dog may be adequate, though most operations usually require at least two dogs. Large operations (particularly range operations) and heavy predator loads require more dogs. Male and female LGDs have proved to be equally effective in protecting of livestock.

While LGDs have been known to fight to the death with predators, in most cases, predator attacks are prevented by a display of aggressiveness. LGDs are known to drive off predators for which physically they would be no match, such as bears and even lions. With the reintroduction of predators into natural habitats in Europe and North America, environmentalists have come to appreciate LGDs because they allow sheep and cattle farming to coexist with predators in the same or nearby habitats. Unlike trapping and poisoning, LGDs seldom kill predators; instead, their aggressive behaviors tend to condition predators to seek unguarded (thus, nonfarm animal) prey. For instance, in Italy's Gran Sasso National Park, where LGDs and wolves have coexisted for centuries, older, more experienced wolves seem to "know" the LGDs and leave their flocks alone.

LGDs are generally large, independent, and protective, which can make them less than ideal for urban or even suburban living. Nonetheless, despite their size, they can be gentle, make good companion dogs, and are often protective towards children. If introduced to a family as a pup, most LGDs are as protective of their family as a working guard dog is of its flock. In fact, in some communities where LGDs are a tradition, the runt of a litter often was kept or given as a household pet or simply kept as a village dog without a single owner.

Many breeds of LGDs are little known outside of the regions where they are still worked. Nevertheless, some breeds are known to display traits advantageous to guarding livestock. Some specialist LGD breeds include:

The Komondor, also known as the Hungarian sheepdog, is a large, white-coloured Hungarian breed of livestock guardian dog with a long, corded coat.

The Pyrenean Mountain Dog, known as the Great Pyrenees in North America, is a large breed of dog used as a livestock guardian dog. It should not be confused with the Pyrenean Mastiff. 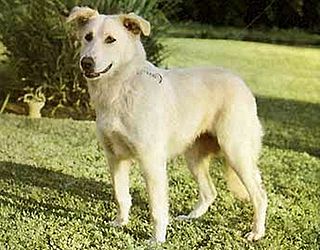 The Aidi is a Berber dog breed used as a livestock guardian, protecting herds of sheep and goats. It also possesses hunting capabilities and good scenting ability. In Morocco, it is often paired in hunting with the Sloughi, which chases down prey that the Aidi has located by scent. 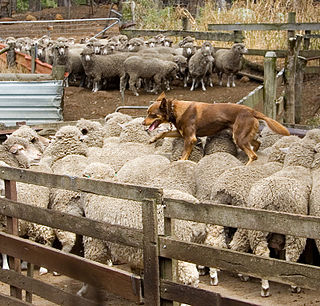 A herding dog, also known as a stock dog, shepherd dog or working dog, is a type of dog that either has been trained in herding or belongs to breeds that are developed for herding.

The Puli is a small-medium breed of Hungarian herding and livestock guarding dog known for its long, corded coat. The tight curls of the coat appear similar to dreadlocks. A similar-looking, but much larger breed – also Hungarian – is the Komondor. The term used for a group of Puli is Pulik. 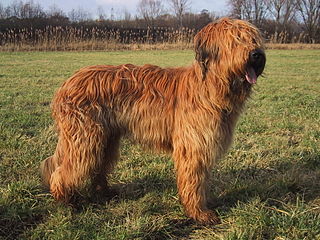 The Briard is an ancient breed of large herding dog, originally from France. A Briard-like dog appears in the illustrations in illuminated copies of Gaston Febus' Livre de chasse, written in the late 14th century. The breed became popular after the Paris dog show of 1863, after having been fixed with crosses with the Beauceron and the Barbet. During the First World War, the Briard was used, almost to the point of extinction, by the French army as a sentry and messenger, and to search for wounded soldiers. The Briard's modern-day roles include police, military, and search-and-rescue work, as well as companion dog.

The Akbash Dog is native to Turkey, and it is primarily used as a livestock guardian dog or shepherd dog. 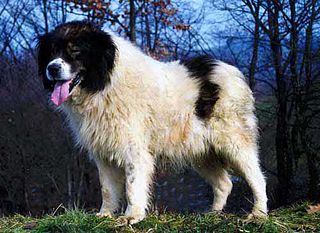 The Tornjak, also known as Bosnian Herzegovinian - Croatian Shepherd dog, is a livestock guardian dog native to Bosnia and Herzegovina and Croatia. The name comes from the local word for a sheep pen, "tor". The foundation stock is made up from genetically homogeneous landrace shepherding dogs dispersed in the mountains and valleys of the region. They are a molosser-type mountain dog, similar to other livestock guardian breeds of the region, the Šarplaninac and the Bucovina Shepherd Dog.

The Kangal Shepherd Dog is a breed of large livestock guardian dog in Sivas, Turkey. Originally the breed served people of Anatolia, where the Kangal continues to be a popular dog breed in Turkey. This dog is classified as the Anatolian Shepherd Dog by some canine registries. The Kangal has a more curly tail and its eyes look pulled back. The breed is of an early Mastiff type with a solid pale tan or sabled coat, and a black mask. According to official Kangal Shepherd Dog organisations in Turkey, including the Cynology Federation of Turkey and the Ankara Kangal Association, Kangals may also be brindle or feature a recessive black tan pattern; with or without a black mask; and/or with white markings. 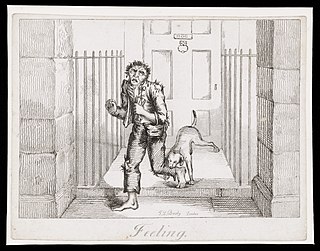 A guard dog or watchdog is a dog used to guard property against, and watch for, unwanted or unexpected human or animal intruders.

The Maremmano-Abruzzese Sheepdog or Maremma Sheepdog, usually referred to simply as the Maremmano or Abruzzese Sheepdog, is a breed of livestock guardian dog indigenous to central Italy and the northern parts of Southern Italy, particularly to Abruzzo and the Maremma region of Tuscany and Lazio. It has been used for centuries by Italian shepherds to guard sheep from wolves. The literal English translation of the name is "The dog of the shepherds of the Maremma and Abruzzese region". The English name of the breed derives from that of the Maremma marshlands where, until recently, shepherds, dogs and hundreds of thousands of sheep over-winteredand where the breed is today abundant, although sheep herding has decreased substantially. The breed is widely employed in Abruzzo, where sheep herding remains vital to the rural economy and the wolf remains an active predator. Similar-looking dog breeds include the Pyrenean Mountain Dog, the Kuvasz of Hungary, the Polish Tatra Sheepdog, the Slovenský Cuvac of Slovakia and the Šarplaninac, with all of which it may share a common ancestor; and the Akbash of Turkey. 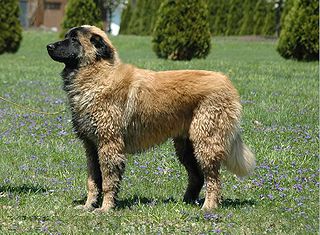 The Spanish Mastiff or Mastín Español is a giant breed of dog from Spain, originally bred to be a guard dog and whose specialized purpose is to be a livestock guardian dog protecting flocks and/or herds from wolves and other predators.

The Caucasian Shepherd Dog is a breed of large livestock guardian dog from the Caucasus region. The breed was standardized and registered by the Soviet Union in the 20th century. However, the breed itself is native to the countries of the Caucasus region - Georgia, Azerbaijan, Armenia, and Dagestan. 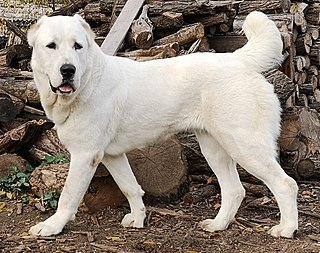 The Central Asian Shepherd Dog is an ancient livestock guardian dog breed. Traditionally, the breed was used for guarding sheep and goat herds, as well as to protect and for guard duty.

The Karakachan dog, is a breed that originated in Bulgaria. It is related to the livestock guardian dogs of the surrounding countries: Romania to the north, Macedonia and Serbia to the west, and Greece and Turkey to the south. The dog is named after the Karakachans, Greek nomadic shepherds. Due to their conservative stock-breeding traditions, they have preserved some of the oldest breeds of domestic animals in Europe: the Karakachan sheep, Karakachan horse and the Karakachan dog. 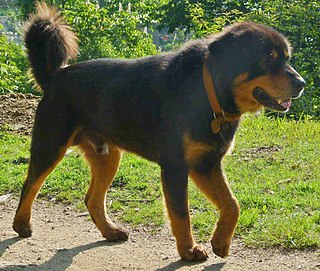 The Bhotia, also known as the Himalayan sheepdog or the Himalayan mastiff, is a breed of livestock guardian dog from India and Nepal.

The Carpathian Shepherd Dog is a large breed of livestock guardian dogs that originated in the Carpathian Mountains of Romania. 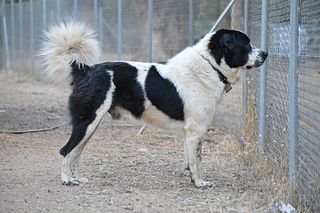 The Greek Shepherd or Greek Sheepdog is a Greek livestock guardian dog that has been bred for centuries for guarding livestock in the mountainous regions of the country.

The Cão de Gado Transmontano or Transmontano Mastiff is a breed of livestock guardian dog from Portugal. It originates in the historical province of Trás-os-Montes e Alto Douro in north-eastern Portugal, and is a rare breed confined mostly to this area.