Apsley and Edenhope in 1999 merged to form Edenhope-Apsley and in 2006 moved to the Horsham & District Football League.

This league was founded in 1937 when two competitions joined to create the Kowree-Naracoorte Football League. Towns of Apsley and Edenhope from the Shire of Kowree in Victoria got together with teams from Kybybolite, Frances and Naracoorte (North Naracoorte and South Naracoorte). After World War 2 Lucindale was admitted, then the two Naracoorte clubs merged to form Naracoorte, and Frances merged with Minimay to form Border Districts. The six team competition was later joined in the 1960s by Kingston and Padthaway. Penola joined from the Western Border Football League in 1988.

Tatiara FL had its origins in 1911. Teams from Mundulla, Bordertown, Keith, Wolseley and Servicetown were later joined by Kaniva, Lillimur and Federals.

Kaniva and Federals merged to form Kaniva & Districts in 1948, and Serviceton and Lillimur merged to form Leeor in 1950. Tintinara replaced Wolseley and the six team competition remain stable from the mid-1950s until 1991.

In 1992 Tintinara withdrew and merged with Border Downs reducing the league to five clubs; this was thought as unworkable, therefore a league merger was sought.

Notable players from the area

Additionally some famous SANFL and AFL footballers have played in the league, including:

Padthaway is a small town in the Australian state of South Australia located in the state's south-east within the Limestone Coast region about 253 kilometres south east of the state capital of Adelaide and about 41 kilometres south-east of the municipal seat of Bordertown. The name is derived from the Potawurutj, the Aboriginal name for Good Water. Padthaway is in the Tatiara District Council, the state electorate of MacKillop and the federal Division of Barker. 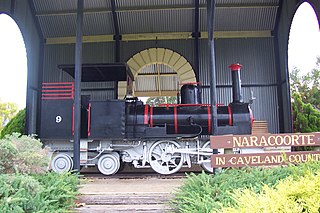 Naracoorte is a town in the Limestone Coast region of South Australia, approximately 336 kilometres south-east of Adelaide and 100 kilometres north of Mount Gambier on the Riddoch Highway (A66). 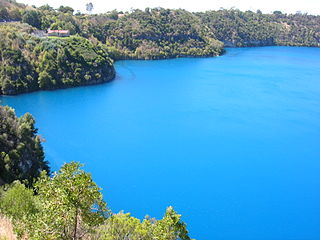 Edenhope is a town in Victoria, Australia. It is located on the Wimmera Highway, 30 kilometres from the South Australian border, in the Shire of West Wimmera local government area. At the 2016 census Edenhope had a population of 946.

Padthaway may refer to the following:

MacKillop is a single-member electoral district for the South Australian House of Assembly. It was named in 1991 after Sister Mary MacKillop who served the local area, and later became the first Australian to be canonised as a Roman Catholic saint. MacKillop is a 25,313 km² rural electorate in the south-east of the state, stretching south and west from the mouth of the Murray River to the Victorian State border, but excluding the far-southern point of the state,. It contains the Kingston District Council, Naracoorte Lucindale Council, District Council of Robe, Tatiara District Council, Wattle Range Council, as well as parts of The Coorong District Council. The main population centres are Bordertown, Keith, Kingston SE, Meningie, Millicent, Naracoorte, Penola and Robe.

Tatiara District Council is a local government area located in south-eastern South Australia. The name Tatiara is said to mean "the good country", a phrase which dates back to the area's first inhabitants, the Bodaruwitj people. It is one of the largest local government areas in South Australia at 6,476 km2 (2,500 sq mi). The district's economy is based primarily on agriculture, with cereal crops such as wheat, barley and oats and with livestock such as sheep, cattle and pigs prominent.

Nigel Fiegert is a former Australian rules footballer who played with Port Adelaide in the Australian Football League (AFL).

Victoria and Albert was an electoral district in the South Australian House of Assembly from 1902 to 1915. The seat elected candidates of both major parties at various times. It merged the seats of Victoria and Albert, which were both recreated on its abolition.

Albert was an electoral district of the House of Assembly in South Australia, spanning its time as both a colony and a state. It was created in 1875, taking much territory from adjacent Victoria, merged with Victoria in 1902 as Victoria and Albert, separated again in 1915, and abolished in 1970.

Limestone Coast zone is a wine zone located in the south east of South Australia. It extends south of a line of latitude approximately in line with Cape Willoughby at the east end of Kangaroo Island and it is bounded by the continental coastline and the border with Victoria. It consists of the following wine regions all of which have received appellation as an Australian Geographical Indication (AGI): Coonawarra, Mount Benson, Mount Gambier, Robe, Padthaway, Wrattonbully and a small number of vineyards located outside the above regions. The zone received AGI in 1996.

The Naracoorte Herald is a weekly newspaper first published in Naracoorte, South Australia on 14 December 1875. It was later sold to Rural Press, previously owned by Fairfax Media, but now an Australian media company trading as Australian Community Media.

TheBorder Chronicle is a weekly newspaper published in Bordertown, South Australia from June 1908 to the present day. Its head office is in Smith Street, Naracoorte. It was later sold to Rural Press, previously owned by Fairfax Media, but now an Australian media company trading as Australian Community Media.

The County of MacDonnell is one of the 49 cadastral counties of South Australia. It was proclaimed in 1857 and named for the South Australian Governor at the time of proclamation, Richard Graves MacDonnell. It is located in the upper south-east of the state from the Limestone Coast at Kingston to the Victorian border. This includes the following contemporary local government areas of the state: