George Eastman is an Italian B-movie actor and screenwriter well known for his frequent collaborations with notorious director Joe D'Amato. He is most famous for his role as the insane, cannibalistic serial killer Klaus Wortmann in the gory 1980 horror film Antropophagus. He also played a similar role in its 1981 follow-up, Absurd. Both films were directed by D'Amato and written by Eastman.

Riccardo Freda was an Italian film director. He worked in a variety of genres, including sword-and-sandal, horror, giallo and spy films.

Ernesto Gastaldi is an Italian screenwriter.

Umberto Lenzi was an Italian film director, screenwriter and novelist.

Bruno Mattei was an Italian film director, screenwriter and editor who directed exploitation films in many genres, including women in prison, nunsploitation, zombie, cannibal and Nazisploitation films. Mattei's films were often following the popular genre trends of the era. Mattei continued work as a director until his death in 2007.

Alfonso Brescia was an Italian film director. Brescia began working in film against his father's wishes, and eventually directed his first film Revolt of the Praetorians in 1964. Brescia worked in several genres in the Italian film industry, including five science fiction films he directed following the release of Star Wars. Brescia's work slowed down towards the late 1980s, and his last film Club Vacanze could not get distribution.

La Bestia in calore is a 1977 Italian exploitation film directed, written, and edited by Luigi Batzella.

Piero Regnoli (1921–2001) was an Italian screenwriter and film director. Born in 1921, Regnoli worked in the film industry between 1953 and 1991 where he wrote over 110 screenplays and directed 11 films. Regnoli's work ranged from sword-and-sandal films, westerns, horror and sexy comedies. His final film where he was officially credited as a director was La principessa sul pisello in 1976. Regnoli did uncredited direction on the 1986 melodrama Giuro che ti amo starring Nino D'Angelo. 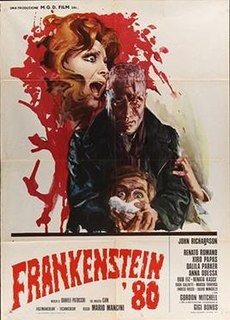 Frankenstein '80 is a 1972 Italian film directed by Mario Mancini.

Mario Bianchi is an Italian film director. Bianchi directed several features including the mondo film Africa Sexy and several sexploitation and pornographic films. He spent the majority of the 1990s directing pornography in Italy under the names Nicholas Moore, Tony Yanker and Martin White.

The Perfume of the Lady in Black is a 1974 giallo-horror film directed by Francesco Barilli.

Ermanno Donati was an Italian film producer. Along with Luigi Carpentieri, Donati won the Nastro d'Argento award for Best Producer for the film The Day of the Owl.

Nude for Satan is a 1974 Italian horror film directed by Luigi Batzella.