There are fourteen extant families of the order Testudines, an order of reptile known as turtles. The testudines are some of the most ancient reptiles alive, with only the tuataras considered more primitive. There are approximately 300 extant species and 97 genera of testudines, split into two suborders: the Cryptodirans and the Pleurodirans. The distinction between these two suborders is based on the mode in which they cover their head and neck. The Pleurodirans, also called the side-necked turtles, have long necks, and fold them sideways to align them with the shell. The Pelomedusidae and Chelidae are the only extant families of pleurodires. The Cryptodirans pull their neck straight back to conceal their head within the shell. The Carettochelyidae, Cheloniidae, Chelydridae, Dermatemydidae, Dermochelyidae, Emydidae, Kinosternidae, Testudinidae and Trionychidae are all cryptodires, although the ability to retract the head has been lost in the sea turtles (Cheloniidae and Dermochelyidae). A third order, the Paracryptodirans, are extinct. [1] [ failed verification ][ dubious – discuss ]

Reptiles are classified according to the pattern of fenestration in the temporal region of the skull. Testudines are placed in the subclass Anapsida because they lack fenestration. [2] There are suggestions that this lack of fenestration is a secondary characteristic and that turtles belong in Diapsida. [3] Both sides cite strong evidence, and the conflict has yet to be resolved. [4] [5] [6] The shell of testudines distinguishes them from other vertebrates. The shell is not an exoskeleton, but a modified ribcage and part of the vertebral column. Because of the shell, the pectoral and pelvic girdles are located within the ribcage. The limb bones are also modified to accommodate to the shell. [1]

The earliest known turtles are from fossils in the Upper Triassic. These fossils are nearly indistinguishable from modern turtles anatomically. In these early fossils (mostly of the genus Proganochelys), the teeth have already been lost, and a keratin beak is suggested by the mandibles. Important differences between Proganochelys and modern turtles are the presence of the palatal teeth (lost in modern species), the inability to retract the head within the shell, and the lack of a trochlear pulley in the jaw closing anatomy. [1]

The following lists the family—the Latin name of the family, date in which the species was formally described and classified, and the binomial authority on the species; the number of genera belonging to the family; the name or names commonly used; an example species and an example image. 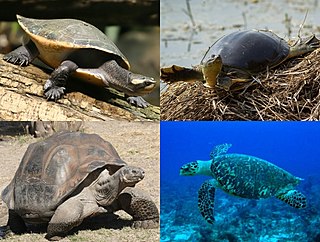 Turtles are reptiles of the order Testudines, also known as Chelonia. They are characterized by a bony or cartilaginous shell, developed from their ribs, that acts as a shield. Testudines include both extant (living) and extinct species. Its earliest known members date from the Middle Jurassic, around 170 million years ago. Among the turtles are included tortoises and terrapins.

An anapsid is an amniote whose skull lacks one or more skull openings (fenestra) near the temples. Traditionally, the Anapsida are the most primitive subclass of reptiles, the ancestral stock from which Synapsida and Diapsida evolved, making anapsids paraphyletic. It is however doubtful that all anapsids lack temporal fenestra as a primitive trait, and that all the groups traditionally seen as anapsids truly lacked fenestra.

Chelidae is one of three living families of the turtle/tortoise suborder Pleurodira, and are commonly called Austro-South American side-neck turtles. The family is distributed in Australia, New Guinea, parts of Indonesia, and throughout most of South America. It is a large family of turtles with a significant fossil history dating back to the Cretaceous. The family is entirely Gondwanan in origin, with no members found outside Gondwana, either in the present day or as a fossil.

Pelomedusidae is a family of freshwater turtles native to sub-Saharan Africa, with a single species, Pelomedusa subrufa, also found in Yemen. They range in size from 12 to 45 cm in carapace length, and are generally roundish in shape. They are unable to fully withdraw their heads into their shells, instead drawing them to the side and folding them beneath the upper edge of their shells, hence are called African side-necked turtles.

Dermochelyidae is a family of turtles which has seven extinct genera and one extant genus, including the largest living sea turtles.

Neodiapsida is a clade, or major branch, of the reptilian family tree and includes all diapsids apart from some early primitive types known as the araeoscelidians.

The Cryptodira are a suborder of Testudines that includes most living tortoises and turtles. Cryptodira differ from Pleurodira in that they lower their necks and pull the heads straight back into the shells, instead of folding their necks sideways along the body under the shells' marginals. They include among their species freshwater turtles, snapping turtles, tortoises, softshell turtles, and sea turtles.

Chelodina, collectively known as snake-necked turtles, is a large and diverse genus of long-necked chelid turtles with a complicated nomenclatural history. Although in the past, Macrochelodina and Macrodiremys have been considered separate genera and prior to that all the same, they are now considered subgenera of the Chelodina, further Macrochelodina and Macrodiremys are now known to apply to the same species, hence Chelydera is used for the northern Snakeneck Turtles.

Proganochelys is an extinct, primitive stem-turtle that has been hypothesized to be the sister taxon to all other turtles creating a monophyletic group, the Casichelydia. Proganochelys was named by Georg Baur in 1887 as the oldest turtle in existence at the time. The name Proganochelys comes from the Greek word ganos meaning brightness, combined with prefix pro, and Greek base chelys meaning "turtle". Proganochelys is believed to have been around 1 meter in size and herbivorous in nature. Proganochelys was known as the most primitive stem-turtle for over a century, until the novel discovery of Odontochelys in 2008. Odontochelys and Proganochelys share unique primitive features that are not found in Casichelydia, such as teeth on the pterygoid and vomer and a plate-like coracoid.

Parareptilia is a subclass or clade of basal sauropsids (reptiles), typically considered the sister taxon to Eureptilia. Parareptiles first arose near the end of the Carboniferous period and achieved their highest diversity during the Permian period. Several ecological innovations were first accomplished by parareptiles among reptiles. These include the first reptiles to return to marine ecosystems (mesosaurs), the first bipedal reptiles, the first reptiles with advanced hearing systems, and the first large herbivorous reptiles. The only parareptiles to survive into the Triassic period were the procolophonoids, a group of small generalists, omnivores, and herbivores. The largest family of procolophonoids, the procolophonids, rediversified in the Triassic and continued to be successful until their demise in the Triassic-Jurassic mass extinction. 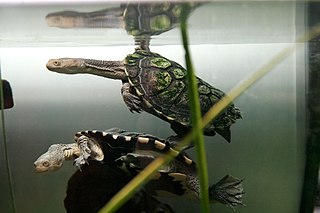 The Pleurodira are one of the two living suborders of turtles, the other being the Cryptodira. The division between these two suborders represents a very deep evolutionary divide between two very different types of turtles. The physical differences between them, although anatomical and largely internal, are nonetheless significant, and the zoogeographic implications of them are substantial. The Pleurodira are known more commonly as the side-necked turtles and the name Pleurodira quite literally translates to side neck, whereas the Cryptodira are known as hidden-necked turtles. The Pleurodira turtles are currently restricted to freshwater habitats in the Southern Hemisphere, largely to Australia, South America, and Africa. Within the Pleurodira, three living families are represented: Chelidae, also known as the Austro-South American side-necked turtles, the Pelomedusidae, also known as the African mud terrapins, and the Podocnemididae, also known as the American side-neck river turtles. However, they are a cosmopolitan clade across the Cretaceous and Cenozoic, and even occurred in marine environments across the world. 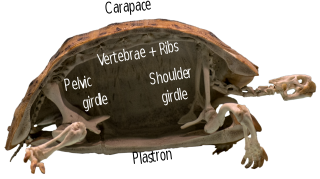 The turtle shell is a highly complicated shield for the ventral and dorsal parts of turtles, completely enclosing all the vital organs of the turtle and in some cases even the head. It is constructed of modified bony elements such as the ribs, parts of the pelvis and other bones found in most reptiles. The bone of the shell consists of both skeletal and dermal bone, showing that the complete enclosure of the shell probably evolved by including dermal armor into the rib cage. 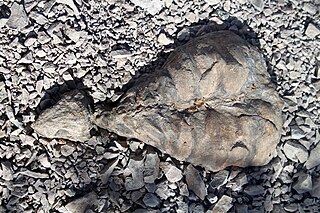 Eunotosaurus is an extinct genus of reptile, possibly a close relative of turtles, from the late Middle Permian Karoo Supergroup of South Africa. The Eunotosaurus resided in the swamps of southern Africa. It is often considered as a possible "missing link" between turtles and their prehistoric ancestors. Its ribs were wide and flat, forming broad plates similar to a primitive turtle shell, and the vertebrae were nearly identical to those of some turtles. It is possible that these turtle-like features evolved independently of the same features in turtles, though some studies suggest Eunotosaurus is a genuine, primitive turtle relative. Other anatomical studies and phylogenetic analysis suggest that Eunotosaurus is a parareptile and not a basal turtle.

Caririemys is an extinct genus of side-necked turtles, belonging to the Pelomedusoides of the family Euraxemydidae. The type species is C. violetae. A single fossil of an individual was found in the Santana Formation in Brazil, an 80-million-year-old Late Cretaceous deposit that has so far preserved other fossil reptiles such as dinosaurs and crocodilians.

Paleontology or palaeontology is the study of prehistoric life forms on Earth through the examination of plant and animal fossils. This includes the study of body fossils, tracks (ichnites), burrows, cast-off parts, fossilised feces (coprolites), palynomorphs and chemical residues. Because humans have encountered fossils for millennia, paleontology has a long history both before and after becoming formalized as a science. This article records significant discoveries and events related to paleontology that occurred or were published in the year 2009. 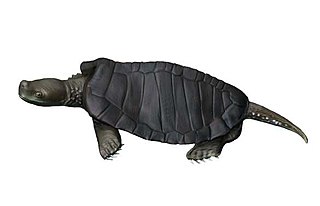 Kayentachelys is an extinct genus of turtle known only from the "silty facies" of the Lower Jurassic Kayenta Formation in northeastern Arizona on the lands of the Navajo Nation.

Reptiles arose about 310–320 million years ago during the Carboniferous period. Reptiles, in the traditional sense of the term, are defined as animals that have scales or scutes, lay land-based hard-shelled eggs, and possess ectothermic metabolisms. So defined, the group is paraphyletic, excluding endothermic animals like birds and mammals that are descended from early traditionally-defined reptiles. A definition in accordance with phylogenetic nomenclature, which rejects paraphyletic groups, includes birds while excluding mammals and their synapsid ancestors. So defined, Reptilia is identical to Sauropsida. 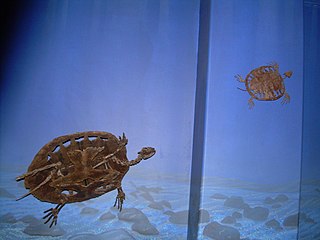 Pancheloniidae is a clade of sea turtles It is defined as all turtles more closely related to cheloniid sea turtles than to dermochelyid ("leatherback") sea turtles.