Major Plains is a rural locality situated to the north-west of Benalla in Victoria, Australia. [1] It is 226 kilometres by road from Melbourne.

Benalla is a small city located on the Broken River in the High Country north-eastern region of Victoria, Australia, about 212 kilometres (130 mi) north east of the state capital Melbourne. At the 2016 census the population was 9,298.

The Rural City of Benalla is a local government area in the Hume region of Victoria, Australia, located in the north-east part of the state. It covers an area of 2,353 square kilometres (908 sq mi) and, in June 2018, had a population of 14,024. 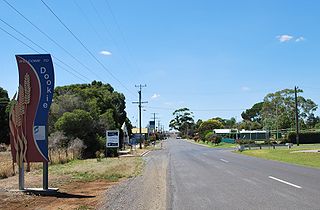 Dookie is a town in the Goulburn Valley region of Victoria, Australia. It is situated in a valley between Mount Major and Mount Saddleback. Dookie is a farming community. At the 2016 census, Dookie had a population of 328. 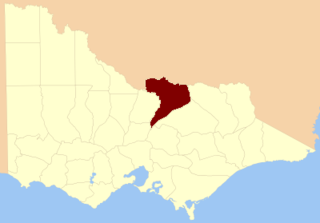 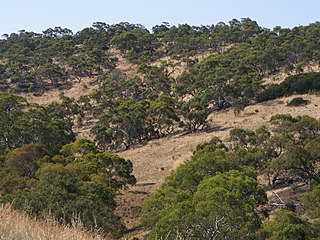 Devenish is a town in northern Victoria, Australia within the Rural City of Benalla local government area, 230 kilometres (143 mi) north of the state capital, Melbourne. At the 2011 census, Devenish and the surrounding area had a population of 360, declining to 197 by 2016. 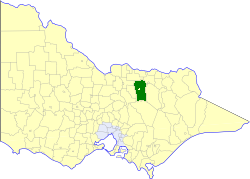 The Shire of Benalla was a local government area about 188 kilometres (117 mi) northeast of Melbourne, the state capital of Victoria, Australia. The shire covered an area of 2,322 square kilometres (896.5 sq mi), and existed from 1868 until 1994. From 1948 onwards, Benalla itself was managed by a different entity, later known as the City of Benalla. 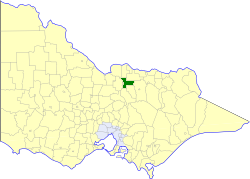 The Benalla & District Football League was an Australian rules football competition based in the Benalla region of Victoria, Australia. The Victorian Country Football League shut the competition down at the end of the 2009 season when the VCFL policy of leagues having a minimum of six clubs could not be met. The five remaining clubs joined the following leagues during the 2009 post-season.

The Little Llangothlin Nature Reserve is a protected wetland nature reserve that is located on the Northern Tablelands in the New England region of New South Wales, in eastern Australia. The 257-hectare (640-acre) reserve is situated approximately 10 kilometres (6.2 mi) north-east of the rural locality of Llangothlin, and some 20 kilometres (12 mi) north-east of Guyra.

Ramsay Conservation Park is a protected area in the Australian state of South Australia located in the Yorke Peninsula in the locality of Ramsay about 6.5 kilometres west-northwest of the town of Port Vincent.

Hallelujah Hills is a rural locality in the Mid North region of South Australia, situated in the Regional Council of Goyder.

Yeldulknie Conservation Park is a protected area in the Australian state of South Australia located on the Eyre Peninsula in the gazetted locality of Cleve about 10 kilometres (6.2 mi) north-east of the town centre in Cleve.

The Cumberland Plain Woodland is one of six main indigenous woodland communities of Sydney, New South Wales, Australia, that comprises an open tree canopy, a groundcover with grasses and herbs, usually with layers of shrubs and/or small trees. Situated in the Cumberland Plain, it is made up of dry sclerophyll woodlands, grasslands and/or forests, reminiscent of Mediterranean forests and temperate grasslands. Currently, less than 6% of the Woodlands remain in small parts distributed across the western suburbs of Sydney, totaling only around 6400 hectares.

Hopkins Creek Conservation Park is a protected area located in the Australian state of South Australia in the locality of Emu Downs about 125 kilometres (78 mi) north-east of the state capital of Adelaide and about 21 kilometres (13 mi) south of the town of Burra.

Prospect Nature Reserve is a nature reserve and recreational area that is situated in the western suburbs of Sydney, New South Wales, Australia, which incorporates the Prospect Reservoir, and also features picnic spots, lookouts, walking tracks and BBQ areas within the Australian bush. It is located within the Blacktown City local government area, but is also close to the boundaries of Cumberland Council and the City of Fairfield.

The St. James Football Club was an Australian Rules Football club based in St. James, in North East Victoria, Australia, and was formed in May 1883.