A mercat cross is the Scots name for the market cross found frequently in Scottish cities, towns and villages where historically the right to hold a regular market or fair was granted by the monarch, a bishop or a baron. It therefore served a secular purpose as a symbol of authority, and was an indication of a burgh's relative prosperity. Historically, the term dates from the period before 1707 when Scotland was an independent kingdom, but it has been applied loosely to later structures built in the traditional architectural style of crosses or structures fulfilling the function of marking a settlement's focal point. Historical documents often refer simply to "the cross" of whichever town or village is mentioned. Today, there are around 126 known examples of extant crosses in Scotland, [1] though the number rises if later imitations are added.

The earliest documentary reference occurs in the reign of William the Lion (1165–1214), when it was decreed that "all merchandises sal be presentit at the mercat and mercat croce of burghis". [2] Early town crosses may have continued the tradition of church crosses used to mark consecrated land or sanctuary boundaries, and functioned similarly to early ecclesiastical crosses, from before the building of stone churches, in marking a communal gathering place. They are thought to have been originally pillars of wood, possibly placed on stone bases, changing to stone pillars in later centuries. [3] Some, as at Inverkeithing, incorporate sundials (the pillar of each cross itself acts as a primitive sundial).

The cross was the place around which market stalls would be arranged, and where 'merchants' (Scots for shopkeepers as well as wholesale traders) would gather to discuss business. It was also the spot where state and civic proclamations would be publicly read by the "bellman" (town crier). For example, in 1682 a town guild in Stirling was accorded the privilege of making a proclamation, to be "intimat at the Mercat Croce that no person pretend ignorance." [4] To this day, royal proclamations are still ceremonially read in public at the Mercat Cross in Edinburgh, including the calling of a general election and succession of a new monarch.

The cross was also the communal focal point of public events such as civic ceremonials, official rejoicings, and public shamings and punishments, including executions. Some crosses still incorporate the iron staples to which jougs and branks were once attached. Communal gatherings still take place at crosses, as at Galashiels on "Braw Lads Day" or Peebles at the start of the Beltane Festival. Crosses are often the place to mark the start or end of Common Ridings as at Musselburgh or events such as the Stonehaven fireball ceremony.

Despite the name, the typical mercat cross is not usually cruciform, or at least has not been since the iconoclasm of the Scottish Reformation. The cross atop the shaft may have been replaced with a small statue, such as a royal unicorn or lion, symbols of the Scottish monarchy, or a carved stone displaying the arms of the royal burgh, or, in the cases of ecclesiastical burghs or burghs of barony, the bishop's or feudal superior's coat-of-arms. These are often painted. Another finial commonly seen is a stone ball as at Clackmannan and Newton Stewart. The shaft is usually surmounted by a plain or decorated capital. A variety of decorative designs are employed, including foliage, emblems like thistles and roses, armorial shields, and mouldings of the egg-and-dart type.

Five crosses: at Edinburgh, Dundee, Perth, Aberdeen and Preston (modern Prestonpans) were supported by a drum-shaped understructure, known as a cross-house, with a platform reached by internal steps or ladder. In the case of Aberdeen's late 17th-century cross the platform is supported by a series of open semi-circular arcades. The Preston Cross, built in the early 17th century, [5] is the only one of the type still existing on its original site. This traditional design has been replicated approximately with added Scots baronial elements in Victorian reconstructions at Edinburgh and Perth. A plainer understructure faintly echoing the design was adopted for Glasgow's cross when a replacement was erected on or near the site of the original in 1921; and simpler versions exist elsewhere, as at Elgin and Selkirk. Most crosses, however, stand on stepped, often octagonal stone bases and are of an average height of between 9 and 13 feet. [6] In some cases, as at Musselburgh (see gallery image) and Kirkcudbright, the pillar is secured within or stands upon a solid stone structure.

Some mercat crosses of today are replicas from the Victorian period, as at Dunfermline and Scone, though they often incorporate one or more original elements, particularly the shaft or a section thereof. Some crosses, as at Linlithgow and St Andrews, were replaced with public drinking fountains substituting for older, demolished crosses, and some were adapted as war memorials after the Great War of 1914–1918. A war memorial may incorporate a part of the original cross, as at Renfrew or Bowden, or have been built deliberately in the style of a mercat cross, as at Lauder and Moffat. The war memorials at Abernethy, North Berwick and Portree also closely resemble mercat crosses and are known as such. The last, of course, lies geographically well outside the historic area of Scottish Lowland burghs. [7] Another example of what might be termed an imitation cross is the war memorial at Dalmeny. It provides the village with a customary focal point and gives the impression that it is much older than its 19th-century origin, but is not indicative of a historical market.

Taken for granted as a normal part of the street scene, crosses have in the main been poorly documented in the past regarding their dates of erection, relocation and remodelling, and they often suffer from neglect in the present. Many no longer stand in their original position. Some, such as Forfar's, [8] and Queensferry's have disappeared, and some, such as Cupar's and Banff's, have been moved to a location outside the burgh but later retrieved and re-erected. [9]

Scottish emigrants to countries such as Canada and especially Australia took the idea of the mercat cross with them, and several cities in the New World have or once had them in the town centre. 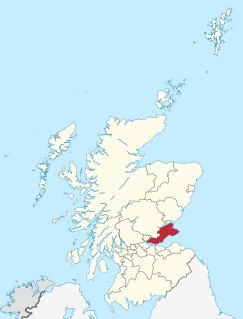 Fife is a council area and historic county of Scotland. It is situated between the Firth of Tay and the Firth of Forth, with inland boundaries to Perth and Kinross and Clackmannanshire. By custom it is widely held to have been one of the major Pictish kingdoms, known as Fib, and is still commonly known as the Kingdom of Fife within Scotland. Fife is one of the six local authorities part of the Edinburgh and South East Scotland city region.

East Lothian is one of the 32 council areas of Scotland, a historic county, registration county and lieutenancy area. The county was also known as Haddingtonshire.

Cupar is a town, former royal burgh and parish in Fife, Scotland. It lies between Dundee and Glenrothes. According to a 2011 population estimate, Cupar had a population around 9,000, making it the ninth largest settlement in Fife, and the civil parish a population of 11,183. It is the historic county town of Fife, although the council now sits at Glenrothes. 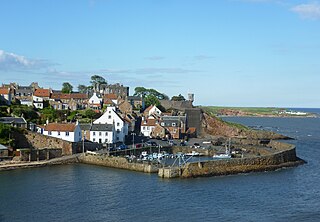 Inverkeithing is a port town and parish, in Fife, Scotland, on the Firth of Forth. According to 2016 population estimates, the town has a population of 4,890. Inverkeithing was given royal burgh status by King David I of Scotland (1124–53) in the 12th century.

Cockenzie and Port Seton is a unified town in East Lothian, Scotland. It is on the coast of the Firth of Forth, four miles east of Musselburgh. The burgh of Cockenzie was created in 1591 by James VI of Scotland. Port Seton harbour was built by George Seton, 11th Lord Seton between 1655 and 1665.

Musselburgh is the largest settlement in East Lothian, Scotland, on the coast of the Firth of Forth, 5 miles (8 km) east of Edinburgh city centre. The population of Musselburgh is 21,900. 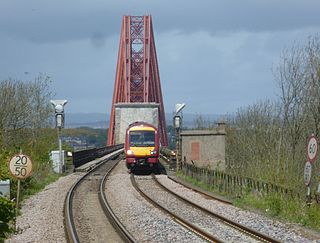 The Fife Circle is the local rail service north from Edinburgh. It links towns of south Fife and the coastal towns along the Firth of Forth before heading to Edinburgh. Operationally, the service is not strictly a circle route, but, rather, a point to point service that reverses at the Edinburgh end, and has a large bi-directional balloon loop at the Fife end.

Prestonpans is a small fishing town east of Edinburgh, Scotland, in the unitary council area of East Lothian. Since the 2001 census recorded the population as 7,153, new houses have drawn many new residents. It is the site of the Battle of Prestonpans, fought in 1745, and has history dating from the eleventh century. The town's important historical architecture includes Preston Tower and the doocot and the local Mercat Cross, which is the only one of its kind in Scotland which remains in its original form and location. Prestonpans is "Scotland's Mural Town", with many murals depicting local history.

Stirling Burghs was a district of burghs constituency of the House of Commons of the Parliament of the United Kingdom from 1708 to 1918.

Cupar railway station is a railway station that serves the town of Cupar in Fife, Scotland. The station has two platforms, of which the southbound one is now wheelchair accessible. Services are provided by Abellio ScotRail and CrossCountry.

John Mylne of Perth was a Scottish master mason who served as Master Mason to the Crown of Scotland. He was born in Perth, the son of John Mylne, also a master mason, and Helen Kenneries. 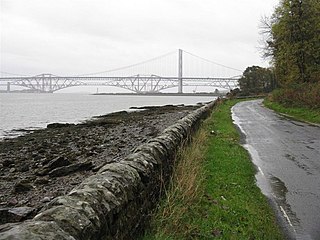 National Cycle Network (NCN) Route 76 is a Sustrans National Route that runs from Berwick-upon-Tweed to Kirkcaldy. The route is 168 miles (270 km) in length and is fully open and signed in both directions. Between Dunbar and Kirkcaldy the route is known as the Round the Forth.