Last updated May 09, 2020
For other uses, see Kinross (disambiguation).
Human settlement in Scotland

Kinross ( /kɪnˈrɒs/ , Scottish Gaelic : Ceann Rois) is a burgh in Perth and Kinross, Scotland, located around 13 miles (21 km) south of Perth and around 20 miles (32 km) north-west of Edinburgh. It is the traditional county town of the historic county of Kinross-shire.

The site of the original parish church and churchyard are located down a small wynd overlooking Loch Leven, a little away from the town.

Kinross was originally linked by railway to Perthshire, Fife and Clackmannanshire until the rail links gradually disappeared. At one time three independent railway companies had their termini at the town. The Fife and Kinross Railway came from the east, the Kinross-shire Railway came from the south and The Devon Valley Railway came from the west. Recently, Kinross has expanded, especially since the construction of the M90 motorway, which is the main north-south artery bypassing the town. Many people working within a commuting radius of Kinross have settled in the town owing to its central location and local amenities. Locals & MSP's Have also asked the Scottish Government to publish a Feasibility Study into re-establishing the Perth - Edinburgh Direct Rail Link. To This day no such Document has been Published.

The burgh is located on the shores of Loch Leven. There are boat trips around the loch and to Loch Leven Castle where Mary, Queen of Scots was held prisoner in 1567.

Up to 2014 the annual T in the Park music festival. which was officially replaced by TRNSMT festival in Glasgow Green, was held nearby, at the former Balado airfield. Balado is also the locale of a now inactive NATO ICBM early warning radar and during the Second World War there was an airstrip and barracks.

As with most of the British Isles, Kinross has an oceanic climate (Köppen: Cfb).

The Loch Leven Trails offers 21 km (13 miles) of walking and cycling heritage trail around the shoreline of Loch Leven. It begins at RSPB Vane Farm Nature Reserve via Findatie to Kinross Pier/Kirkgate Park.

There is a leisure centre located in Kinross, called Loch Leven Leisure. 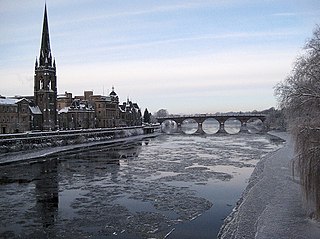 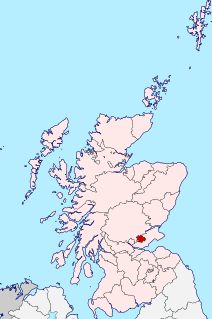 Loch Leven is a fresh water loch located immediately to the east of the burgh of Kinross in Perth and Kinross council area, central Scotland. Roughly triangular, the loch is about 6 km (3.7 mi) at its longest. Prior to the canalisation of the River Leven, and the partial draining of the loch in 1826-36, Loch Leven was considerably larger. The drop in water level by 1.4 m reduced to the loch to 75% of its former size, and exposed several small islands, as well as greatly increasing the size of the existing ones.

Milnathort is a small town in the parish of Orwell in the historic county of Kinross-shire, Scotland and the local government (Council) area of Perth and Kinross. The smaller neighbour of nearby Kinross, Milnathort has a population of around 2,000 people. It is situated amidst picturesque countryside at the foot of the Ochil Hills, and near the north shore of Loch Leven. From 1977 it became more easily accessible due to the development of the M90 motorway. The name comes from the Gaelic maol coirthe meaning "bare hill of the standing stones".

Leven is a seaside town in Fife, set in the east Central Lowlands of Scotland. It lies on the coast of the Firth of Forth at the mouth of the River Leven, 8.1 miles (13.0 km) north-east of the town of Kirkcaldy and 6.4 miles (10.3 km) east of Glenrothes.

Kinross and WesternPerthshire was a county constituency of the House of Commons of the Parliament of the United Kingdom from 1918 until 1983, representing, at any one time, a seat for one Member of Parliament (MP), elected by the first past the post system of election. 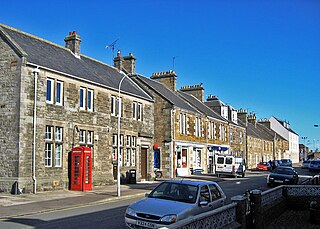 Ladybank is a village and former burgh of Fife, Scotland. It is about 62 kilometres (39 mi) north of Edinburgh, 8 kilometres (5.0 mi) southwest of Cupar, close to the River Eden. Its 2006 population was estimated at 1,582. 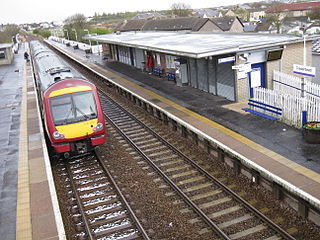 Levenmouth is a conurbation comprising a network of small settlements on the north side of the Firth of Forth, in Fife on the east coast of Scotland. It consists of three principle coastal towns; Buckhaven, Leven and Methil, and a number of smaller towns, villages and hamlets inland. The industrial towns of Buckhaven and Methil lie on the west bank of the River Leven, and the resort town of Leven is on the east bank. The "Bawbee Brig" links the two sides of the river. Historically, Buckhaven and Methil were joined together as one burgh, while Leven was separate. The area had an estimated population of 37,238 in 2006.

Perthshire South and Kinross-shire is a constituency of the Scottish Parliament (Holyrood). It elects one Member of the Scottish Parliament (MSP) by the plurality method of election. Also, however, it is one of nine constituencies in the Mid Scotland and Fife electoral region, which elects seven additional members, in addition to nine constituency MSPs, to produce a form of proportional representation for the region as a whole.

Kinnesswood, possibly from the Scottish Gaelic: Ceann eas ciad is a village in Perth and Kinross, Scotland. It lies to the east of Loch Leven, on the A911 road, below Bishop Hill in the Lomond Hills. It is approximately 4 miles west of Glenrothes and 4 miles east of Kinross. 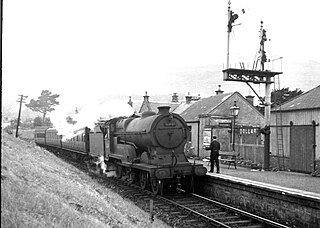