The Paulding-class destroyers were a series of United States Navy destroyers derived from the Smithclass with the torpedo tubes increased from three to six via twin mounts. They were the first destroyers in the US Navy with oil-fired boilers. The 21 Pauldings doubled the number of destroyers in the US Navy. The Paulding class derived its name from the class's lead ship, Paulding, named for Rear Admiral Hiram Paulding (1797–1878). Like the Smiths, they were nicknamed "flivvers" after the small and shaky Model T Ford once the larger "thousand tonner" destroyers entered service.

The torpedo armament was six 18-inch (450 mm) torpedo tubes in three twin mounts. This was an easy upgrade from the three single tubes with reloads of the Smith class, as the new design twin mounts actually weighed less than the older single mounts. [3] The gun armament was the same as the Smith class, with five 3-inch (76 mm)/50 caliber guns. [4] During World War I, one or two depth charge tracks were equipped for the convoy escort mission. [5]

There was some variation in engineering among the ships of this class. The most visible was that hulls 24–27, 30–32, 34, 36, 37, 39, and 40 had three stacks instead of four, with the middle stack being larger as two boiler uptakes were trunked together in it. [3] Most of the ships' direct drive turbines were arranged as in the Smith class on three shafts, with a high-pressure center turbine exhausting to two low-pressure turbines on the outboard shafts. Cruising turbines were also fitted on the outboard shafts in these ships to improve fuel economy at low speeds. However, hulls 26–27, 30–31, and 34 had two turbines on two shafts (Zoelly or Curtis), with cruising stages included in the turbine casings. [3]

This was the first USN destroyer class with oil-fired boilers. Compared with the Smith class, the Pauldings had 12,000 shaft horsepower (8,900 kW) instead of 10,000 shp (7,500 kW), making them about a knot faster. From DD-32 on, most references state that Thornycroft boilers instead of Normand were equipped. [1] However, the Navy's official Ships' Data Book for 1911 shows that other types of boilers were used as well, including Yarrow and White-Forster. [6]

The Pauldings were commissioned in 1910–1912 and were active throughout World War I, primarily as convoy escorts in the Atlantic. They were equipped with one or two depth charge tracks for this mission. [5] All served in the United States Navy; twelve were transferred to the United States Coast Guard 1924–30 for the Rum Patrol; and all were scrapped 1934–35 to comply with the London Naval Treaty. [1]

HMS Impulsive was an I-class destroyer built for the Royal Navy during the 1930s. She saw service in World War II before being scrapped in 1946. She has been the only ship of the Navy to bear this name.

The Florida-class battleships of the United States Navy comprised two ships: Florida and Utah. Launched in 1910 and 1909 respectively and commissioned in 1911, they were slightly larger than the preceding Delaware class design but were otherwise very similar. This was the first US battleship class in which all ships received steam turbine engines. In the previous Delaware-class, North Dakota received steam turbine propulsion as an experiment while Delaware retained triple-expansion engines. 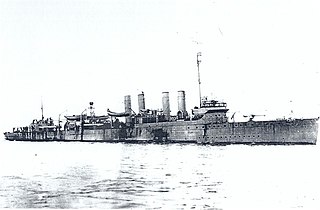 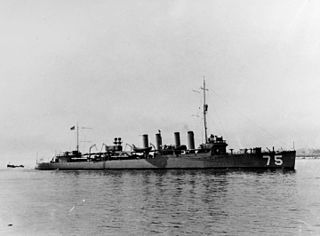 The Wickes-class destroyers were a class of 111 destroyers built by the United States Navy in 1917–19. Along with the 6 preceding Caldwell-class and 156 subsequent Clemson-class destroyers, they formed the "flush-deck" or "four-stack" type. Only a few were completed in time to serve in World War I, including USS Wickes, the lead ship of the class.

The Sims class destroyers were built for the United States Navy, and commissioned in 1939 and 1940. These twelve ships were the last United States destroyer class completed prior to the American entry into World War II. All Sims-class ships saw action in World War II, and seven survived the war. No ship of this class saw service after 1946. They were built under the Second London Naval Treaty, in which the limit on destroyer standard displacement was lifted, but an overall limit remained. Thus, to maximize the number of destroyers and avoid developing an all-new design, the Sims class were only 70 tons larger as designed than previous destroyers. They are usually grouped with the 1500-ton classes and were the sixth destroyer class since production resumed with the Farragut class in 1932. 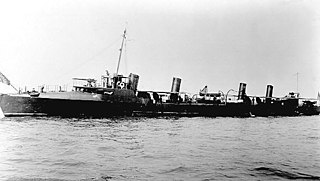 Three Truxtun-class destroyers were built for the United States Navy. Part of the original 16 destroyers authorized by Congress on 4 May 1898 for the fiscal year 1899 program, they were commissioned in 1902. They were very similar to their Bainbridge-class contemporaries, except for mounting six 6-pounder (57 mm) guns instead of five. They were considered the most successful of the first 16 US Navy destroyers, and were succeeded by the larger Smith class.

Officially designated as Torpedo Boat Destroyers (TBDs) when authorized by an Act of Congress on 4 May 1898 under the fiscal year 1899 program, the Bainbridge-class destroyers were the first destroyers so designated of the United States Navy, built from 1899 through 1903. These were the first 13 of 16 TBDs authorized by Congress in 1898 following the Spanish–American War, and were decommissioned and sold in 1919 following service in World War I. One ship was lost at sea: Chauncey, which collided with the British merchant ship SS Rose in 1917. After decommissioning, the 12 remaining ships were sold to Joseph G. Hitner of Philadelphia, except for Hopkins. Hopkins was sold to the Denton Shore Lumber Company in Tampa, Florida.

The Smith-class destroyers were the first ocean-going destroyers in the United States Navy, and the first to be driven by steam turbines instead of the reciprocating engines fitted in the sixteen earlier and much smaller torpedo boat destroyers ordered in 1898. Flusser and Reid are sometimes considered to be Flusser-class ships. Also, since Flusser was completed first, some period documentation refers to the entire class as Flussers. 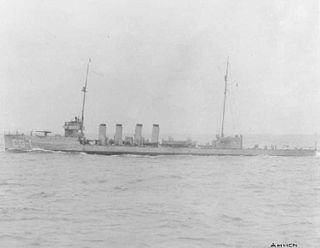 Four destroyers in the United States Navy comprised the Cassin class. All served as convoy escorts during World War I. The Cassins were the first of five "second-generation" 1000-ton four-stack destroyer classes that were front-line ships of the Navy until the 1930s. They were known as "thousand tonners" for their normal displacement, while the previous classes were nicknamed "flivvers" for their small size, after the Model T Ford.

The Aylwin class was a class of four destroyers in the United States Navy; all served as convoy escorts during World War I. The Aylwins were the second of five "second-generation" 1000-ton four-stack destroyer classes that were front-line ships of the Navy until the 1920s. They were known as "thousand tonners". All were scrapped in 1935 to comply with the London Naval Treaty. 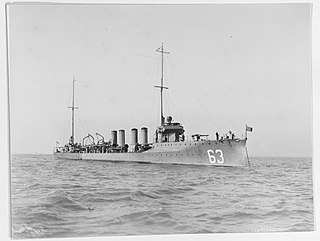 The Sampson-class destroyers served in the United States Navy during World War I. Commissioned in 1916 and 1917, the class was a modification of the O'Brien and Tucker classes, with the number of 21-inch (533 mm) torpedo tubes increased from four twin-mounts to four triple-mounts. The Sampsons were the final six ships of the 26 "thousand tonner" destroyers. They were the largest and most heavily armed of the "thousand tonners", and the subsequent "flush deck" classes differed mainly in hull design and the engineering plant. 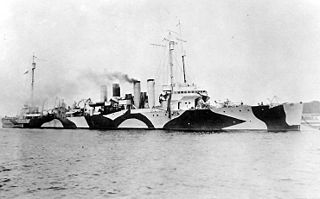 The Caldwell class was a class of six "flush deck" United States Navy destroyers built during World War I and shortly after. Four served as convoy escorts in the Atlantic; the other two were completed too late for wartime service. Two were scrapped during the 1930s, but four survived to serve throughout World War II, three of these in service with the Royal Navy under the Destroyers for Bases Agreement and the fourth as a high speed transport. 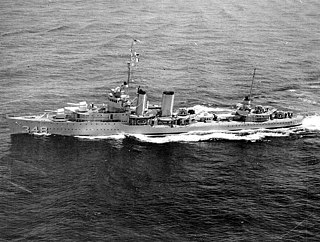 The Farragut-class destroyers were a class of eight 1,365-ton destroyers in the United States Navy and the first US destroyers of post-World War I design. Their construction, along with the Porter class, was authorized by Congress on 29 April 1916, but funding was delayed considerably. Limited to 1,500 tons standard displacement by the provisions of the London Naval Treaty of 1930, the ships were laid down beginning in 1932 and were completed by 1935. After 12 years since the last of the previous class of American destroyers was commissioned, the Farraguts were commissioned in 1934 and 1935.

The Gridley-class destroyers were a class of four 1500-ton destroyers in the United States Navy. They were part of a series of USN destroyers limited to 1,500 tons standard displacement by the London Naval Treaty and built in the 1930s. The first two ships were laid down on 3 June 1935 and commissioned in 1937. The second two were laid down in March 1936 and commissioned in 1938. Based on the preceding Mahan-class destroyers with somewhat different machinery, they had the same hull but had only a single stack and mounted sixteen 21 inch (533 mm) torpedo tubes, an increase of four. To compensate for the increased torpedo armament weight, the gun armament was slightly reduced from five 5"/38 caliber guns (127 mm) to four. USS Maury (DD-401) made the highest trial speed ever recorded for a United States Navy destroyer, 42.8 knots. All four ships served extensively in World War II, notably in the Solomon Islands and the Battle of the Philippine Sea, with Maury receiving a Presidential Unit Citation. 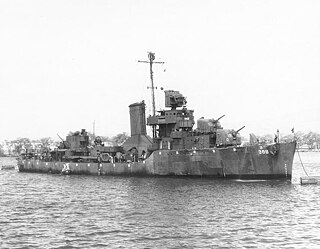 The Bagley class of eight destroyers was built for the United States Navy. They were part of a series of USN destroyers limited to 1,500 tons standard displacement by the London Naval Treaty and built in the 1930s. All eight ships were ordered and laid down in 1935 and subsequently completed in 1937. Their layout was based on the concurrently-built Gridley class destroyer design and was similar to the Benham class as well; all three classes were notable for including sixteen 21 inch torpedo tubes, the heaviest torpedo armament ever on US destroyers. They retained the fuel-efficient power plants of the Mahan-class destroyers, and thus had a slightly lower speed than the Gridleys. However, they had the extended range of the Mahans, 1,400 nautical miles (2,600 km) farther than the Gridleys. The Bagley class destroyers were readily distinguished visually by the prominent external trunking of the boiler uptakes around their single stack. 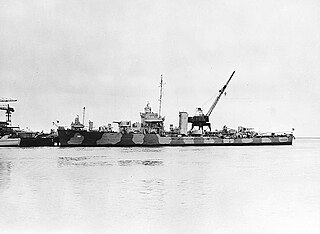 The Somers-class destroyer was a class of five 1850-ton United States Navy destroyers based on the Porter class. They were answers to the large destroyers that the Japanese navy was building at the time, and were initially intended to be flotilla leaders. They were laid down from 1935–1936 and commissioned from 1937–1939. They were built to round-out the thirteen destroyers of 1,850 tons standard displacement allowed by the tonnage limits of the London Naval Treaty, and were originally intended to be repeat Porters. However, new high-pressure, high-temperature boilers became available, allowing the use of a single stack. This combined with weight savings allowed an increase from two quadruple center-line torpedo tube mounts to three. However, the Somers class were still over-weight and top-heavy. This was the first US destroyer class to use 600 psi (4,100 kPa) steam superheated to 850 °F (454 °C), which became standard for US warships built in the late 1930s and World War II. 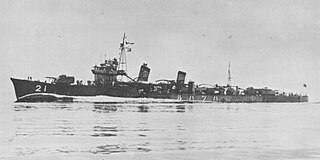 HMS Cameleon was one of 20 Acorn-class destroyers built for the Royal Navy in the 1910s. Completed in 1910 she saw active service in the First World War.