The following is a list of public holidays in Abkhazia . The working days are marked in cursive. 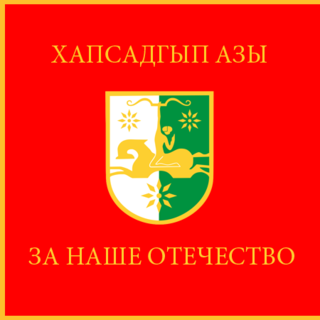 The Abkhazian Armed Forces are the military of Abkhazia.

The Transnistrian republic is recognized by three states with limited recognition, and is a member of one international organization, the Community for Democracy and Human Rights, that was established by these four states.

In June and July 2008 a series of bombings took place in Georgia's breakaway republic of Abkhazia, killing 4 and injuring 18 people.

The office of Minister for Defence has been one of the most important in the breakaway Republic of Abkhazia due to the ongoing conflict with Georgia. The position was created 11 October 1992, shortly after the outbreak of the 1992-1993 war with Georgia. The first Minister for Defence was Vladimir Arshba, but due to his injuries for most of the time his functions were carried out by Deputy Minister for Defence and Chief of the General Staff Sultan Sosnaliev, who eventually also formally succeeded Arshba on 25 April 2003. Sosnaliev oversaw Abkhazia's successful expulsion of Georgian forces and remained Defence Minister until on 1 July 1996 he resigned to return to his native Kabardia.

The Abkhazian passport is issued to citizens of the Republic of Abkhazia for the purpose of international travel and for the purpose of legal identification within Abkhazia. As Abkhazia is only recognised by Russia, Venezuela, Syria, Nicaragua and Nauru, for all other destinations Abkhazian citizens must use another passport for international travel.

Mirab Boris-ipa Kishmaria is the current Minister of Defence of the Republic of Abkhazia, which enjoys only limited recognition internationally.

Igor Muratovich Akhba, is the current ambassador of the Republic of Abkhazia to the Russian Federation, and a one time Minister for Foreign Affairs.

Daur Tarba is the current Minister for Agriculture of Abkhazia. In the past, he has also been Chairman of United Abkhazia at a time when it was the ruling party, Vice Premier and head of the Ochamchira district.

Alexander Viktorovich Stranichkin is an Abkhazian politician. A former vice-speaker of the People's Assembly of Abkhazia, Stranichkin currently serving as one of the four vice-premiers of the Republic of Abkhazia. 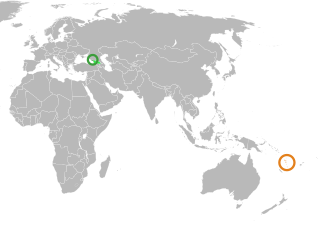 Bilateral relations between Abkhazia and Vanuatu were begun when Vanuatu recognised Abkhazia's independence on 23 May 2011. On that day a joint statement on establishment of diplomatic relations was signed. However, the exact nature of the recognition was a matter of dispute and was not regularized until July 2013.

The elections for the 5th convocation of the People's Assembly of Abkhazia were held in two rounds on 10 and 24 March 2012.

The Ministry for Culture and the Preservation of Historical and Cultural Heritage of Abkhazia is a government agency of Abkhazia which holds an ministerial position in the Abkhazian government.

A-Mobile is the second mobile phone operator of Abkhazia behind Aquafon, both in number of subscriptions and in age.

The Chamber of Commerce and Industry of the Republic of Abkhazia Russian: Торгово-Промышленная Палата Республики Абхазия was founded on 18 March 2002 through a decree of President Vladislav Ardzinba. Former Prime Minister Gennady Gagulia has been its Chairman since its inception. Its First Vice President is former Economy and former Taxes and Fees Minister Adgur Lushba, its Vice Presidents Vadim Gurji and former Foreign Minister Maxim Gvinjia.

Beslan Konstantinovich Bartsits is a former Prime Minister of Abkhazia, having been appointed by President Raul Khajimba on 5 August 2016 with his term ending 25 April 2018. In the past, he has served as Head of the Presidential Administration, Head of Gagra District and Member of Parliament.

Daur Arshba is a politician from Abkhazia. He is the Head of the Presidential Administration, having been appointed by President Raul Khajimba on 10 October 2016, and Chairman of the pro-government Forum for the National Unity of Abkhazia. In the past, he has served as Vice Speaker of the People's Assembly and as Head of Tkvarcheli District. Following the death of Gennadi Gagulia on 8 September 2018, Arshba was appointed Acting Prime Minister of Abkhazia, a position he held until 18 September 2018.