Previously the show has aired on the original Virgin Radio (January 2001 - October 2005) and its successor station Absolute Radio (September 2008 - May 2018) in the United Kingdom.

In February 2018, O'Connell announced he would be leaving Absolute Radio and emigrating to Australia to host the Gold 104.3 breakfast show in Melbourne.

The final UK show was broadcast on 18 May 2018. [2] The last song played on the show was "Nothing Lasts Forever" by Echo & the Bunnymen.

In April 2020, Australian Radio Network announced that The Christian O'Connell Show will be syndicated across the country from Monday 27 April, airing for one hour from 7PM until 8PM on weeknights on Gold 104.3 in Melbourne, WSFM in Sydney, 97.3 FM in Brisbane, Mix 102.3 in Adelaide and 96FM in Perth. [5] The show is highlights from the breakfast show which airs on Gold 104.3.

Christian O'Connell (born 7 April 1973) is a British radio presenter. He began presenting on 2CR in Bournemouth in 1999, moving to Juice FM in Liverpool in 2000. He later moved to the weekday breakfast show on XFM and hosting Fighting Talk on BBC Radio 5 Live. After departing xFM, O'Connell began hosting the weekday morning breakfast show on Virgin Radio, then Absolute Radio (from 2006 - 2018) and Gold 104.3 in Melbourne, Australia.

Patrina Jones (born 27 June) is a newsreader and regular contributor on the show. She has been the voice of Gold 104.3 breakfast news since 2012.

Sing It For Melbourne

In mid-August 2018, the Global Liveability index was released from the Economist Intelligence Unit, which showed that Vienna had unseated Melbourne as the best city to live in. Christian, after conversing with the mayor, decided that Melbourne needed a song about how wonderful it is, somewhat similar to the idea of Ultravox's 1981 hit "Vienna" as he thought that was the only thing Vienna had over Melbourne. Jack Post wrote the song, with input from listeners.

The song reached #1 on the iTunes rock chart. All proceeds from the song are being donated to the Starlight Foundation. [7]

Leading up to the 2018 AFL Grand Final Christian started a football competition for Melbourne Grandmas to compete in a longest kick competition. The event was held at Whitten Oval on Saturday 22 September 2018. The competition, which was entered into by more than 100 Melbourne Grans, was won by North Melbourne supporter, Bronwyn Fyfe. Her winning kick was 28.54 metres long.

The Gran Final was held again on Sunday, September 22, 2019 at the Whitten Oval. This year's winner was Carmel Hine with a winning kick of 27.9 meters.

Christian asked bands to reunite and compete for the chance to play at One Electric Day with Jimmy Barnes and The Angels. The competition was won by Bungalow, a band who last performed in 1996.

Semi-regular segment (it comes and goes at different parts of the year). Listeners can enter on the Gold 104.3 website, for any bill and any amount, and if chosen the bill will be paid in full.

New contest segment as of July 2020. Christian provides a subject (such as pizza toppings, or girls names that start with the letter a) and listeners have 15 seconds to name as many things as they can in that category.

O'Connell encourages listeners to contact celebrities and ask them to ring the show during a period of time. Originally launched on Absolute Radio, the celebrity who wins the public vote wins £10,000 for their charity, and the listener who gets them to call wins £10,000 for themselves (should a celebrity call without prompt from a listener, they will get the full £20,000). The best five telephone calls are selected by the presenters, and the listeners then vote for their favourite. In 2015, Maisie Williams was the winner, and in 2016 Judy Murray won.

Christian relaunched this competition on Gold 104.3 in Melbourne in August 2019, with 57 celebrities calling into the show. The winner was Olivia Newton-John, [8] and her Cancer Wellness And Research Centre received $20,000. The listener who convinced Newton-John to call said he was going to donate $10,000 of his winnings to the same charity.

In September 2020, the next round of Who's Calling Christian launched, with 53 celebrities calling in. The winner was Ricky Gervais, [9] and the charity All Dogs Matter will receive $40,000, as the listener who convinced Gervais to call in is located in the UK and therefore could not receive his $20,000 prize due to contest restrictions in the terms & conditions. Christian also surprised the second-placed celebrity, Shane Warne, the day after announcing Gervais as the winner, to give a $10,000 donation to an Australian charity supporting kids with cancer, as Christian wanted a local charity to benefit as well. [10]

Richard Mark Firth (born 8 May 1977) was Christian's co-host in the UK. He began working at Absolute Radio when several other members of the breakfast show left for different positions elsewhere in Absolute Radio and on other stations. Richie previously worked with O’Connell at a Bournemouth radio station, where he famously was the Travel Chicken. In 2015, he and Christian competed in and won the Red Bull Soapbox Race. [11]

Richie is married and a father of 3.

Firth also broadcasts on Absolute 80s between 13:00 and 16:00 every weekend. Since September 2018, he has co-hosted The Absolute Radio Hometime Show with Andy Bush.

Maggie from Wexford, Ireland was the sport and travel presenter on the show before moving to BBC Radio Kent. Currently she works for RTÉ.

Andrew Bailey was the newsreader for Absolute Radio, reading the news for the Breakfast show. He left the show on 25 September 2015, as well as leaving his position as head of news across the Bauer network, joining Sky News to become Senior News Editor.

Faye Carruthers was the sports reader and a journalist for Absolute Radio, reading the sports news for the Breakfast Show. She joined the breakfast show in June 2014 and departed in February 2017.

Emma Jones (born 1988) was a newsreader. She currently serves as the newsreader for The Dave Berry Breakfast Show.

Jenny Barsby became resident newsreader in March 2017 taking over from Matt Dyson following the departure of Faye Carruthers from the show. Her final show was on Friday 25 August 2017.

The Chris Moyles Show is the title given to two differing versions of a radio programme hosted by Chris Moyles, originally broadcast as Radio 1 Breakfast from 5 January 2004 to 14 September 2012 before transferring three years later on 21 September 2015 to the Global Radio-owned commercial radio station Radio X. The show is broadcast 6:30–10:00am each weekday.

Scott Mills is a Sony Radio Academy Award-winning radio show, broadcast Monday – Thursday afternoons on BBC Radio 1 from 1–3:30 pm. On Fridays, Mills hosts The Official Chart from 4–6pm. The show originally aired from 4–7 pm from 7 June 2004 until 30 March 2012 and 1–4 pm until 26 March 2020 when the show was extended for four hours due to the coronavirus pandemic. It is hosted by Scott Mills, with contributions from Chris Stark. Previous contributors have included Mark Chapman, Laura Sayers, and Beccy Huxtable, the last of whom left the show on 18 January 2013.

Gold 104.3 is a radio station broadcasting in Melbourne, Australia. Gold 104.3 is part of the Pure Gold Network and broadcasts on the 104.3 MHz frequency.

Joanne McFarlane , commonly known as Jo Stanley, is an Australian television and radio presenter and comedian. 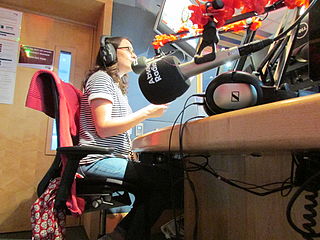 Devin Joseph Jordan Griffin is a British radio presenter, DJ and actor, who is most commonly known for his former weekend afternoon shows on BBC Radio 1. Since January 2nd, he now presents a weekend show on Heart.

The Chris Evans Breakfast Show is the name given to two versions of a radio programme hosted by broadcaster Chris Evans in the United Kingdom. The first was the incarnation of The Radio 2 Breakfast Show that aired every weekday morning between 11 January 2010 and 24 December 2018. Evans had taken over from Terry Wogan, who ended his stint as the station's morning presenter on 18 December 2009. On 3 September 2018, it was announced by Evans live on air that he would be leaving the network. The show broadcast its final episode on BBC Radio 2 on 24 December 2018. On 3 October 2018, it was announced by Evans live on air that Zoe Ball would take over the slot, with her first broadcast airing on 14 January 2019. Evans meanwhile started the second incarnation of the show on Virgin Radio that began on 21 January 2019. 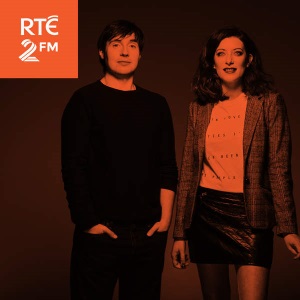 Greg James was a British weekday radio show previously broadcast on BBC Radio 1, starring Greg James as the main presenter. It was broadcast Monday to Thursday from 4:00pm until 7:00pm, which included a 15-minute break for Newsbeat at 5:45pm. The main focus of the show was music and entertainment in the form of features and celebrity interviews. The show achieved a Sony Radio Academy Award in 2014 for 'Best Entertainment Programme' and an ARIA in 2016 for 'Best Entertainment Production'. The final show aired on 19 July 2018 as James went on to present Radio 1 Breakfast.

Christopher Smith, known professionally as Chris Smith, is an English radio newsreader. He is most famous for presenting Newsbeat on BBC Radio 1 and co-hosting the That's What He Said podcast alongside Greg James.

Jase & PJ is an Australian breakfast radio show hosted by Jason Hawkins and Polly 'PJ' Harding on KIIS 1011 in Melbourne. The show is syndicated in the night-time slot on the KIIS Network following The Kyle and Jackie O Show. A daily podcast of the morning's show is also produced.