The Three Horseshoes was a public house at Uxbridge Road and South Road at Southall Broadway, Southall, London.

It was built between 1914 and 1922 (construction was delayed by World War I) by the architect Nowell Parr. [1]

In 1989, the local council proposed to demolish The Three Horseshoes as part of a town centre redevelopment scheme. However, this was opposed by CAMRA, the Twentieth Century Society and English Heritage, who nearly spot-listed the pub to save it. [1]

CAMRA call it "perhaps one of the best examples of the earlier Nowell Parr's work". [1]

It closed on 4th December 2016 and has been converted into shops and flats. [2]

The Campaign for Real Ale (CAMRA) is an independent voluntary consumer organisation headquartered in St Albans, England, which promotes what they designate as "real" ale, "real" cider, "real" perry and traditional British pubs and clubs. With just over 160,000 members, it is the largest single-issue consumer group in the UK, and is a founding member of the European Beer Consumers Union (EBCU). 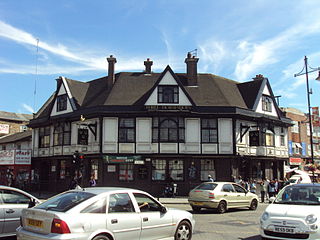 Southall is a large suburban district of West London, England, part of the London Borough of Ealing and is one of its seven major towns. It is situated 10.7 miles (17.2 km) west of Charing Cross and had a population of 69,857 as of 2011. It is generally divided in three parts: the mostly residential area around Lady Margaret Road ; the main commercial centre at High Street and Southall Broadway ; and Old Southall/Southall Green to the south consisting of Southall railway station, industries and Norwood Green bounded by the M4.

The Wenlock Arms is a public house in Hoxton, in London's East End, which began trading in 1787. The pub is located halfway between Old Street and Angel, just off the City Road and the City Road Basin and Wenlock Basin on the Regent's Canal. The pub has won awards for the quality and range of its cask ales. 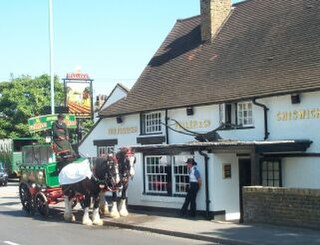 Corpusty is a village in Norfolk, England. Corpusty and its sister village Saxthorpe are situated either side of the upper reaches of the River Bure. Corpusty is about sixteen miles from Norwich and six miles (10 km) from Holt, Aylsham, and Reepham. According to Eilert Ekwall's place names, Corpusty means 'Korpr's stye'.

Chunal is a hamlet in Derbyshire, England. It is located on the A624 road, 1 mile south of Glossop. The philosopher Ludwig Wittgenstein conducted aeronautical research at Chunal during his time as an engineering research student at Manchester University (1908–1911). He flew kites into the upper atmosphere. 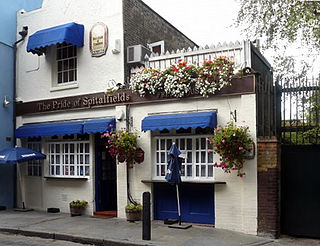 The Pride of Spitalfields is a public house at 3 Heneage Street in Spitalfields in the East End of London, just off Brick Lane. It was associated with a Jack the Ripper suspect.

The Old Pack Horse is a Grade II listed public house in a prominent position on the corner of Chiswick High Road and Acton Lane in Chiswick, London.

Thomas Henry Nowell Parr FRIBA was a British architect, best known for designing pubs in west London. Many of these were built while Parr was "house architect" for Fuller's Brewery. Parr designed various buildings in Brentford while he was surveyor and then architect to the Council from 1894 to 1907. 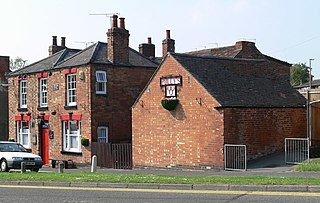 The Golden Cross is a Grade II listed public house at the junction of Customhouse Street and Hayes Bridge Road in the centre of Cardiff, Wales. The current building dates from 1903 and is noted for its distinctive ceramic tiling. 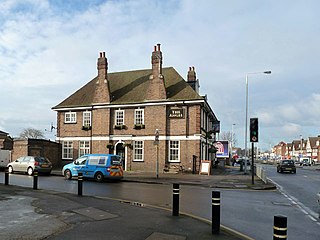 The Red Lion is a disused public house on Soho Road, in the Handsworth district of Birmingham, England.

The Cheshire Cheese is a public house at 5 Little Essex Street, London WC2, on the corner with Milford Lane.

The Commercial is a public house at 210-212 Railton Road, Herne Hill, London. It is cited in 'The CAMRA Regional Inventory for London' as being one of only 133 pubs in Greater London with a pub interior of special historic interest, most notably for its, "Original counters, bar-back, fireplaces and much fielded wall panelling" dating from the 1930s. In July 2016, Lambeth Council designated The Commercial as a locally-listed heritage asset of architectural or historic interest, being described as a, "Two-storey Neo Georgian style inter-war pub with a three-part convex façade which follows the curve of the building line".

Three Horseshoes may refer to: