Thrombotic microangiopathy (TMA) is a pathology that results in thrombosis in capillaries and arterioles, due to an endothelial injury. [1] It may be seen in association with thrombocytopenia, anemia, purpura and kidney failure.

The clinical presentation of TMA, although dependent on the type, typically includes: fever, microangiopathic hemolytic anemia (see schistocytes in a blood smear), kidney failure, thrombocytopenia and neurological manifestations. Generally, renal complications are particularly predominant with Shiga-toxin-associated hemolytic uremic syndrome (STx-HUS) and atypical HUS, whereas neurologic complications are more likely with TTP. Individuals with milder forms of TTP may have recurrent symptomatic episodes, including seizures and vision loss. [2] With more threatening cases of TMA, and also as the condition progresses without treatment, multi-organ failure or injury is also possible, as the hyaline thrombi can spread to and affect the brain, kidneys, heart, liver, and other major organs. [3]

The specific cause is dependent of the type of TMA that is presented, but the two main pathways that lead to TMA are external triggers of vascular injury, such as viruses, bacterial Shiga toxins or endotoxins, antibodies, and drugs; and congenital predisposing conditions, including decreased levels of tissue factors necessary for the coagulation cascade. Either of these pathways will result in decreased endothelial thromboresistance, leukocyte adhesion to damaged endothelium, complement consumption, enhanced vascular shear stress, and abnormal vWF fragmentation. The central and primary event in this progression is injury to the endothelial cells, which reduces the production of prostaglandin and prostacyclin, ultimately resulting in the loss of physiological thromboresistance, or high thrombus formation rate in blood vessels. Leukocyte adhesion to the damaged endothelial wall and abnormal von Willebrand factor (or vWF) release can also contribute to the increase in thrombus formation. [4] More recently, researchers have attributed both TTP and HUS to targeted agents, such as targeted cancer therapies, immunotoxins, and anti-VEGF therapy. [2]

Bacterial toxins are the primary cause of one category of thrombotic microangiopathy known as HUS or hemolytic uremic syndrome. HUS can be divided into two main categories: Shiga-toxin-associated HUS (STx-HUS), which normally presents with diarrhea, and atypical HUS. The Shiga-toxin inhibits the binding of eEF-1-dependent binding of aminoacyl tRNA to the 60S subunit of the ribosome, thus inhibiting protein synthesis. The cytotoxicity from the lack of protein damages glomerular endothelial cells by creating voids in the endothelial wall and detaching the basement membrane of the endothelial layer, activating the coagulation cascade. Atypical HUS may be caused by an infection or diarrheal illness or it may be genetically transmitted. This category of TMA encompasses all forms that do not have obvious etiologies. Mutations in three of the proteins in the complement cascade have been identified in patients with atypical HUS. [3] Several chemotherapeutic drugs have also been shown to cause damage to the epithelial layer by reducing the ability for the cells to produce prostacyclin, ultimately resulting in chemotherapy-associated HUS, or C-HUS.[ citation needed ]

The second category of TMAs is TTP thrombotic thrombocytopenic purpura, which can be divided into 3 categories: congenital, idiopathic, and non-idiopathic. [5] Congenital and idiopathic TTP are generally associated with deficiencies in ADAMTS13, a zinc metalloprotease responsible for cleaving Very Large vWF Multimers in order to prevent inappropriate platelet aggregation and thrombosis in the microvasculature. Natural genetic mutations resulting in the deficiency of ADAMTS13 have been found in homozygous and heterozygous pedigrees in Europe. [3] Researchers have identified common pathways and links between TTP and HUS, [2] [6] while other sources express skepticism about their common pathophysiology. [7]

The course of treatment and the success rate is dependent on the type of TMA. Some patients with atypical HUS and TTP have responded to plasma infusions or exchanges, a procedure which replaces proteins necessary for the complement cascade that the patient does not have; however, this is not a permanent solution or treatment, especially for patients with congenital predispositions. [3] Monoclonal antibodies like eculizumab and caplacizumab can assist with atypical hemolytic uremic syndrome and acquired thrombotic thrombocytopenic purpura respectively whilst dexamethasone can help with immune thrombotic thrombocytopenic purpura and low molecular weight heparin can help with disseminated intravascular coagulation.[ citation needed ] 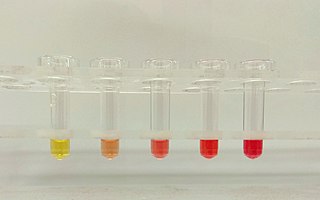 Hemolysis or haemolysis, also known by several other names, is the rupturing (lysis) of red blood cells (erythrocytes) and the release of their contents (cytoplasm) into surrounding fluid. Hemolysis may occur in vivo or in vitro. 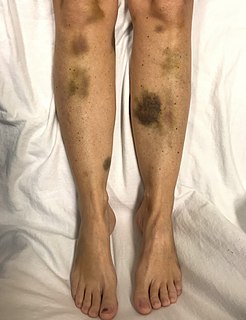 Thrombotic thrombocytopenic purpura (TTP) is a blood disorder that results in blood clots forming in small blood vessels throughout the body. This results in a low platelet count, low red blood cells due to their breakdown, and often kidney, heart, and brain dysfunction. Symptoms may include large bruises, fever, weakness, shortness of breath, confusion, and headache. Repeated episodes may occur.

Thrombocytopenia is a condition characterized by abnormally low levels of platelets, also known as thrombocytes, in the blood. It is the most common coagulation disorder among intensive care patients and is seen in 20% of medical patients and a third of surgical patients. 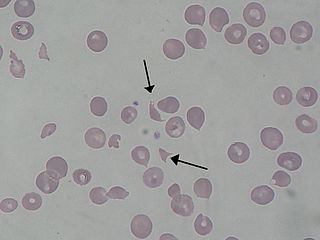 Hemolytic–uremic syndrome (HUS) is a group of blood disorders characterized by low red blood cells, acute kidney failure, and low platelets. Initial symptoms typically include bloody diarrhea, fever, vomiting, and weakness. Kidney problems and low platelets then occur as the diarrhea progresses. Children are more commonly affected, but most children recover without permanent damage to their health, although some children may have serious and sometimes life-threatening complications. Adults, specially the elderly, may present a more complicated presentation. Complications may include neurological problems and heart failure. 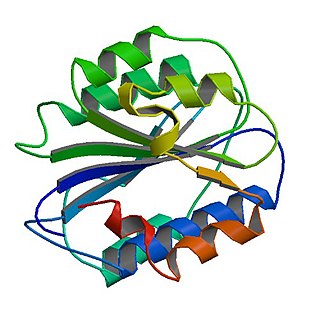 von Willebrand factor (VWF) is a blood glycoprotein involved in hemostasis, specifically, platelet adhesion. It is deficient and/or defective in von Willebrand disease and is involved in many other diseases, including thrombotic thrombocytopenic purpura, Heyde's syndrome, and possibly hemolytic–uremic syndrome. Increased plasma levels in many cardiovascular, neoplastic, metabolic, and connective tissue diseases are presumed to arise from adverse changes to the endothelium, and may predict an increased risk of thrombosis. 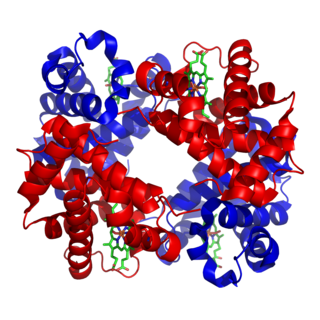 Hemoglobinuria is a condition in which the oxygen transport protein hemoglobin is found in abnormally high concentrations in the urine. The condition is caused by excessive intravascular hemolysis, in which large numbers of red blood cells (RBCs) are destroyed, thereby releasing free hemoglobin into the plasma. Excess hemoglobin is filtered by the kidneys, which excrete it into the urine, giving urine a purple color. Hemoglobinuria can lead to acute tubular necrosis which is an uncommon cause of a death of uni-traumatic patients recovering in the ICU. 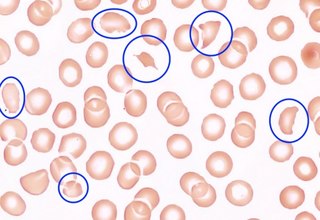 A schistocyte or schizocyte is a fragmented part of a red blood cell. Schistocytes are typically irregularly shaped, jagged, and have two pointed ends.

The term cryosupernatant refers to plasma from which the cryoprecipitate has been removed. It is used to treat thrombocytopenic purpura.

Shigatoxigenic Escherichia coli (STEC) and verotoxigenic E. coli (VTEC) are strains of the bacterium Escherichia coli that produce either Shiga toxin or Shiga-like toxin (verotoxin). Only a minority of the strains cause illness in humans. The ones that do are collectively known as enterohemorrhagic E. coli (EHEC) and are major causes of foodborne illness. When infecting humans, they often cause gastroenteritis, enterocolitis, and bloody diarrhea and sometimes cause a severe complication called hemolytic-uremic syndrome (HUS). The group and its subgroups are known by various names. They are distinguished from other strains of intestinal pathogenic E. coli including enterotoxigenic E. coli (ETEC), enteropathogenic E. coli (EPEC), enteroinvasive E. coli (EIEC), enteroaggregative E. coli (EAEC), and diffusely adherent E. coli (DAEC).

Atypical hemolytic uremic syndrome (aHUS) is an extremely rare, life-threatening, progressive disease that frequently has a genetic component. In most cases it can be effectively controlled by interruption of the complement cascade. Particular monoclonal antibodies, discussed later in the article, have proven efficacy in many cases.

Upshaw–Schulman syndrome (USS) is the recessively inherited form of thrombotic thrombocytopenic purpura (TTP), a rare and complex blood coagulation disease. USS is caused by the absence of the ADAMTS13 protease resulting in the persistence of ultra large von Willebrand factor multimers (ULVWF), causing episodes of acute thrombotic microangiopathy with disseminated multiple small vessel obstructions. These obstructions deprive downstream tissues from blood and oxygen, which can result in tissue damage and death. The presentation of an acute USS episode is variable but usually associated with thrombocytopenia, microangiopathic hemolytic anemia (MAHA) with schistocytes on the peripheral blood smear, fever and signs of ischemic organ damage in the brain, kidney and heart.

Ravulizumab, sold under the brand name Ultomiris, is a humanized monoclonal antibody complement inhibitor medication designed for the treatment of paroxysmal nocturnal hemoglobinuria (PNH) and atypical hemolytic uremic syndrome. It is designed to bind to and prevent the activation of Complement component 5 (C5).