He is currently the head coach for Harvard Football. Murphy has led the program since the 1994 season. He is Harvard's most successful coach.

Harvard football has recently enjoyed 16 consecutive winning seasons under Murphy's leadership. Murphy's 137 wins at Harvard places him first among head coaches in the program's history. The 2004 squad went 10–0 and was the only undefeated team in Division I-AA that season. He repeated this feat in 2014, with his 10-0 Crimson squad again posting the only undefeated record in FCS that season.

In 2012, Murphy was elected president of the American Football Coaches Association. [1]

Kurt Charles "K. C." Keeler is an American football coach and former player. He is currently the head coach at Sam Houston State University. He was the head football coach at the University of Delaware from 2002 to 2012. Keeler served as the head football coach at Rowan University from 1993 to 2001. His 2003 Delaware Fightin' Blue Hens squad won the NCAA Division I-AA Football Championship, and returned to the Division I Championship game in 2007, 2010 and returned in 2020 as Sam Houston State University’s head football coach. Keeler won the 2020 FCS National Championship game making him the only coach in FCS history to win a national championship at two different institutions. The win also pushed Keeler past Youngstown State Coach Jim Tressel to become the all-time winningest coach in FCS Playoff history. Keeler is currently the 37th winningest coach in the history of college football. In Keeler's 27 years as a head football coach he has won 243 games. He has taken 16 teams to the NCAA playoffs with 14 of his teams reaching the Final Four and 9 of his teams reaching the National Championship game. He is the only coach in college football history to take 3 different programs to the final four as well as 3 different programs to the National Championship. Keeler is 16-0 all time in first round playoff games as well as 30-0 all time in home playoff games. K.C. is one of only four FCS Head Coaches to win all three of the National Coach of the Year awards. In 2010 he won both the AFCA and Liberty Mutual Coach of the Year and in 2016 he was awarded the Eddie Robinson National Coach of the Year.

The North Dakota State Bison football program represents North Dakota State University in college football at the NCAA Division I Football Championship Subdivision level and competes in the Missouri Valley Football Conference. The Bison play in the 19,000 seat Fargodome located in Fargo. The Bison have won sixteen national championships and 36 conference championships. They won five-consecutive NCAA Division I FCS National Championships between 2011 and 2015 as well as three more consecutively between 2017 and 2019. NDSU is the only college football program to ever win five consecutive NCAA national championships, and hold the record for most FCS titles with eight. 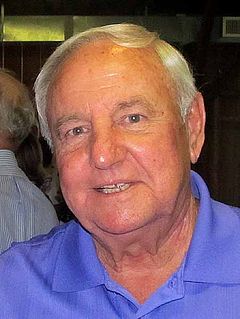 Roy Kidd is a former collegiate football league player and coach. He served as the head coach at Eastern Kentucky University from 1964 to 2002, compiling a record of 314–124–8. Kidd's Eastern Kentucky Colonels won NCAA Division I-AA Football Championships in 1979 and 1982 and were runners-up in 1980 and 1981. His 314 career victories are second-most in NCAA Division I-AA/FCS history, trailing only those of Grambling State's Eddie Robinson. Kidd was inducted into the College Football Hall of Fame as a coach in 2003.

The Montana Grizzlies football program represents the University of Montana in the Division I Football Championship Subdivision (FCS) of college football. The Grizzlies have competed in the Big Sky Conference since 1963, where it is a founding member. They play their home games on campus in Missoula at Washington–Grizzly Stadium, where they had an average attendance of 25,377 in 2016.

The North Alabama Lions football program represents the University of North Alabama (UNA) in the NCAA Division I Big South Conference, an Atlantic Sun-affiliated football conference. UNA plays its home games at Braly Municipal Stadium in Florence, Alabama. They are currently coached by Chris Willis. UNA was a member of Division II from 1972 to 2017.

Jimmye McFarland Laycock is a former American football coach. He served as the head football coach at the College of William & Mary from 1980 through 2018, retiring with the third-longest continuous head coaching tenure in NCAA Division I football history. He amassed an overall record of 249 wins, 194 losses, and two ties. Laycock graduated from William & Mary in 1970 and played quarterback under legendary coaches Marv Levy and Lou Holtz. Prior to taking over the Tribe head coaching position, Laycock coached at Newport News High School, Clemson University, The Citadel, and the University of Memphis.

The James Madison Dukes football program represents James Madison University in the sport of American football. The Dukes compete in the NCAA Division I Football Championship Subdivision (FCS) as members of the Colonial Athletic Association (CAA). The university first fielded a football team in 1972, and the Dukes play at the on-campus Bridgeforth Stadium in Harrisonburg, Virginia. The Dukes are currently coached by Curt Cignetti.

The Albany Great Danes football program is the intercollegiate American football team for the University at Albany located in the U.S. state of New York. The team competes in the NCAA Division I Football Championship Subdivision (FCS) as a football-only member of the Colonial Athletic Association (CAA). The 2013 season was the Great Danes' first in the CAA, following a 14-year tenure in the Northeast Conference. 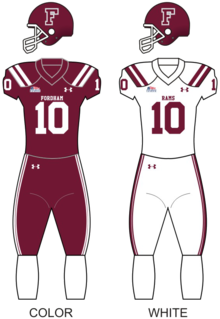 The Fordham Rams football program is the intercollegiate American football team for Fordham University located in the U.S. state of New York. The team competes in the NCAA Division I Football Championship Subdivision (FCS) and are members of the Patriot League. Fordham's first football team was fielded in 1882. The team plays its home games at the 7,000 seat Coffey Field in Bronx, New York. The Rams are coached by former Yale offensive coordinator Joe Conlin. He is a distant relative to the late Ed Conlin, Fordham's all-time leading scorer in basketball who later played seven seasons in the NBA.