Last updated January 21, 2022
Family of arachnids
Not to be confused with Trombiculidae, similar in name and appearance, but a different family of mites.

Their life pattern is in stages similar to other members of the Prostigmata: egg, pre-larva, larva, protonymph, deutonymph, tritonymph and adult (male or female). They usually have only one breeding cycle per year. [3]

They are active predators as grown adults. As early instars they are often parasites of insects [4] and other arachnids.

One well known species from Europe, Asia, and North Africa is Trombidium holosericeum . [5] The systematics of this group has been in flux and many former subfamilies of this are now raised to families within the Trombidioidea. [3] [6]

The oil from the red velvet mite Trombidium grandissimum is used in traditional Indian medicine to treat paralysis. [8] [9]

Trombicula, known as chiggers, red bugs, scrub-itch mites, or berry bugs, are small arachnids in the Trombiculidae family. In their larval stage, they attach to various animals, including humans, and feed on skin, often causing itching. These relatives of ticks are nearly microscopic, measuring 0.4 mm (0.01 in) and have a chrome-orange hue. A common species of harvest mite in North America is Trombicula alfreddugesi; in the UK, the most prevalent harvest mite is Trombicula autumnalis.

The Acariformes, also known as the Actinotrichida, are the most diverse of the two superorders of mites. Over 32,000 described species are found in 351 families, with an estimated total of 440,000 to 929,000 species, including undescribed species.

Zicman Feider (1903–1979) was a Jewish Romanian acarologist, a remarkable researcher and a gifted academic, whose work continues to influence by many generations of biologists, some of whom studied zoology under his supervision. His name as a researcher is forever associated with the enigmatic group of Acari a.k.a. Acarina, for which he arduously worked to perfect their taxonomy. Alone or in collaboration with his numerous disciples, he described and created 1 phalanx and 2 sub-phalanxes, 16 families and 8 subfamilies, 40 genera, 4 subgenera, and 145 species new to science. One could only compare professor Feider's work with that of Aristide Caradgea, who studied micro-Lepidoptera, attracting all the world researchers of that group to come in a pilgrimage to his modest place in Grumazesti, Neamț, Romania. Similarly, Feider's strenuous line of work encompassed Acari collections from all over Europe, St. Helen Island, North Korea, Nepal, Mongolia, India, Vietnam, Brazil, Venezuela, and Chile, making his lab in the Alexandru Ioan Cuza University, of Iași, Romania, a Mecca of the world's acarologists.

The Raphignathoidea is a superfamily of the Acari (mite) Order Trombidiformes. It contains many predators of small invertebrates, while some are herbivores and others parasites. 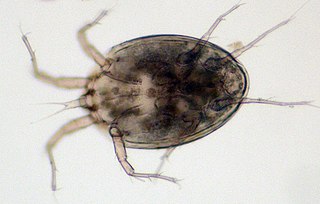 Histiostomatidae is a family of astigmatid mites and branches basically in a phylogenetic tree of the Astigmata. 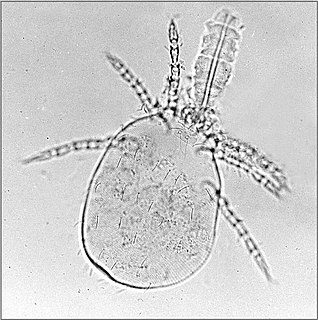 Trombiculidae (; commonly referred to as chiggers, but also known as berry bugs, harvest mites, bush-mites, red bugs or scrub-itch mites, are a family of mites. Chiggers are often confused with jiggers - a type of flea. Several species of Trombiculidae in their larva stage bite their animal or human host and by embedding their mouthparts into the skin cause "intense irritation" or "a wheal, usually with severe itching and dermatitis",

Trombidium holosericeum is a species of mite in the genus Trombidium. It occurs in Europe, Asia, and North Africa and is commonly confused with other red mite species.

Trombidium is a genus of mite with about 30 described species.

Trombidium southcotti is a species of mite in the genus Trombidium in the family Trombidiidae. It is found in Iran.

Protelean organisms are widely regarded as a special class of parasites, often referred to as parasitoids. Protelean parasites refer to insects that begin the juvenile phase of their lives as parasites and ultimately destroy or consume their host to emerge as free-living adults. Defining attributes of Protelean parasitoids include a parasitic nature that is confined to the larval stage, destruction of a single host, and an independent mature stage. Other distinguishing characteristics include a body size similar to its host and a comparatively simple life style. Parasitoids and their hosts are typically in the same taxonomic class.

Mites are small crawling animals related to ticks and spiders. Most mites are free-living and harmless. Other mites are parasitic, and those that infest livestock animals cause many diseases that are widespread, reduce production and profit for farmers, and are expensive to control.

Abrolophus marinensis is a species of mite belonging to the family Erythraeidae. It is named after the Marine de Farimore, Corsica, where the species was first collected. A. marinensis differs from its cogenerate species in its palptarsus having 2 setae with a tufty tip. It particularly differs from Abrolophus longicollis in its shorter length measurements.

Abrolophus mirabelae is a species of mite belonging to the family Erythraeidae. It belongs to the group of species that have comb-like setae.

Allothrombium polikarpi is a species of mite belonging to the family Trombidiidae, first described from Greece.

Epipocus gorhami is a species of handsome fungus beetle in the family Endomychidae. It is found in Central America and North America.

Trochoideus desjardinsi is a species of handsome fungus beetle in the family Endomychidae. It is found in Africa, North America, and Southern Asia.

Pterodontia flavipes is a species of small-headed flies. Adult males are 5.5–10.5 mm in size, while adult females are 5–9 mm. The larvae are thought to enter their host spiders at the leg articulations. First instar larvae of the species have also been recorded attacking the mites Podothrombium and Abrolophus. 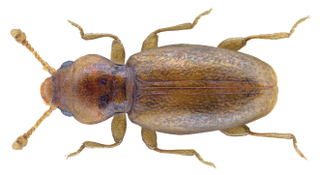 Merophysiinae is a subfamily of handsome fungus beetles in the family Endomychidae.

Abrolophus is a genus of mites in the family Erythraeidae. It comprises the following species:

Allothrombium is a genus of mites belonging to the family Trombidiidae.