Troy Academy was a school of higher education in Davis County, Iowa. It is on the National Register of Historic Places. It was founded in 1853 as a "seminary of learning" and operated through the Des Moines Presbytery and then independently. [1] [2] It was the first "normal school" teaching teachers in the newly created state of Iowa. [3] In addition to training teachers, it also taught students hoping to become lawyers, doctors and eventually taught courses in business and accounting. [4] Eventually the Troy Academy became the high school of the Troy Independent School District in 1904. The school was for most of its history coeducational. [5] The Troy Academy is undergoing renovations and is accessible to the public a few times per year and upon request. [6]

Washington County is a county located in the U.S. state of Iowa. As of the 2020 census, the population was 22,565. The county seat is Washington. 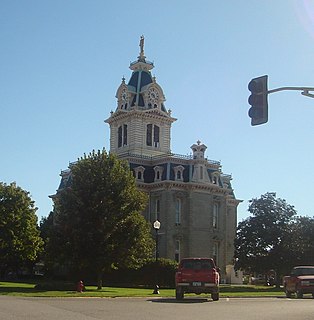 Davis County is a county located in the U.S. state of Iowa. As of the 2020 census, the population was 9,110. The county seat is Bloomfield.

Drakesville is a city in Davis County, Iowa, United States. The population was 164 at the time of the 2020 census. 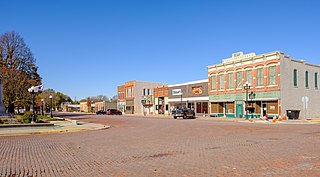 Mount Ayr is a city in Ringgold County, Iowa, United States. The population was 1,623 at the time of the 2020 census. It is the county seat of Ringgold County. Mount Ayr is a rural community in southwestern Iowa, 22 miles west of Interstate 35 on State Highway 2. Mount Ayr was founded in 1875 and the community was named in honor of poet Robert Burns’ birthplace in Ayr, Scotland. The “mount” was added to indicate its location on the highest point of land in the area.

Monticello is a home rule-class city in Wayne County, Kentucky, in the United States. It is the seat of its county. The population was 6,188 at the time of the 2010 U.S. census.

The International Academy (IA) is a high school with its main campus located in Bloomfield Township, Oakland County, Michigan, with additional campuses in White Lake Township, Michigan and Troy, Michigan. It is a public, tuition-free school of choice for students across Oakland County. Students are required to earn both high school and International Baccalaureate (IB) diplomas. In 2020, according to IA, 92% of the graduates earned IB diplomas, compared to the world average of 79%. In 2021, IA ranked No. 43 in the United States and No. 3 in Michigan among public high schools according to U.S. News & World Report.

Garland Independent School District is a public school district with its headquarters in the Harris Hill Administration Building in Garland, Texas, United States. Garland ISD extends from the Dallas city limits, northeast to the county line and serves parts of the communities of Garland, Rowlett, and Sachse. Small portions of Dallas and Wylie are served by Garland ISD. 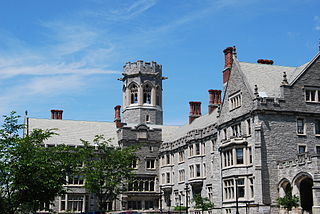 Dubuque Senior High School is a four-year public high school located in Dubuque, Iowa. It is one of two high schools in the Dubuque Community School District, and enrolls 1,447 students in grades 9–12. The school's mascot is the Ram; it competes at the state level in class 4A and is a member of the Mississippi Valley Athletic Conference.

The Dubuque Community School District (DCSD) is a public school district based in Dubuque, Iowa, United States. DCSD, which operates schools in eastern Dubuque County, is the seventh largest school district in Iowa. As of the 2007-2008 school year, DCSD has 10,728 students enrolled in its schools.

Lancaster High School is a public secondary school in Lancaster, Texas (USA). It is part of the Lancaster Independent School District and serves students in grades nine through twelve.

Newbury Academy was an alternative private high school serving students in grades 9-12 that opened in September 2001, based in Dumont, New Jersey. From 2008–2009, Newbury Academy was a virtual school. All classes were conducted online, with teachers making weekly visits to the students' homes.

Iowa School for the Deaf is a pre-K to 12th grade school for deaf and hard-of-hearing students located in Council Bluffs, Iowa. It serves students who live in Iowa and Nebraska.

The Alabama Institute for Deaf and Blind (AIDB) is a school for people with blindness and/or deafness operated by the U.S. state of Alabama in the city of Talladega. The current institution includes the Alabama School for the Deaf, the Alabama School for the Blind, and the Helen Keller School, named for Alabamian Helen Keller, which serves children who are both deaf and blind. The E. H. Gentry Technical Facility provides vocational training for older students, and the institution offers employment to graduates through its Alabama Industries for the Blind workshops in Talladega and Birmingham. The AIDB has regional centers in Birmingham, Huntsville, Tuscaloosa, Montgomery, Mobile, Dothan, Auburn, and Tuscumbia. The AIDB currently serves nearly 24,500 residents from all 67 counties of the state.