True frogs is the common name for the frog family Ranidae. They have the widest distribution of any frog family. They are abundant throughout most of the world, occurring on all continents except Antarctica. The true frogs are present in North America, northern South America, Europe, Africa (including Madagascar), and Asia. The Asian range extends across the East Indies to New Guinea and a single species (the Australian wood frog (Hylarana daemelii)) has spread into the far north of Australia.

Many of the true frogs are aquatic or live close to water. Most species lay their eggs in the water and go through a tadpole stage. However, as in most families of frogs, there is large variation of habitat within the family. There are also arboreal species of true frogs, and the family includes some of the very few amphibians that can live in brackish water. [1]

The subdivisions of the Ranidae are still a matter of dispute, although most are coming to an agreement. Several former subfamilies are now recognised as separate families (Petropedetidae, Cacosterninae, Mantellidae, and Dicroglossidae). The genus Rana has now been split up and is much reduced in size.

While too little of the vast diversity of true frogs has been subject to recent studies to say something definite, as of mid-2008, studies are going on, and several lineages are recognizable. [2] [3] [4]

The following phylogeny of some genera was recovered by Che et al., 2007 using mitochondrial genes. [6]

Most of the subfamilies formerly included under Ranidae are now treated as separate families, leaving only Raninae remaining. The following genera are recognised in the family Ranidae:

A number of taxa are placed in Ranidae incertae sedis , that is, their taxonomic status is too uncertain to allow more specific placement.

Rana is a genus of frogs commonly known as the Holarctic true frogs, pond frogs or brown frogs. Members of this genus are found through much of Eurasia and western North America. Many other genera were formerly included here. These true frogs are usually largish species characterized by their slim waists and wrinkled skin; many have thin ridges running along their backs, but they generally lack "warts" as in typical toads. They are excellent jumpers due to their long, slender legs. The typical webbing found on their hind feet allows for easy movement through water. Coloration is mostly greens and browns above, with darker and yellowish spots.

Amnirana is a genus of frogs in the family Ranidae, "true frogs". The genus is primarily found in Sub-Saharan Africa, but one species occurs in parts of southern and southeastern Asia. Some of the African species are widespread but contain undescribed cryptic diversity. Most species have a white upper lip, and the genus is sometimes known as the white-lipped frogs. 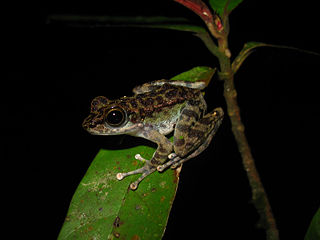 Amolops is a genus of true frogs native mainly to eastern and south-eastern Asia. These frogs are closely related to such genera as Huia, Meristogenys, Odorrana, Pelophylax and Rana, but still form a distinct lineage among the core radiation of true frogs. They are commonly known as "torrent frogs" after their favorite habitat - small rapid-flowing mountain and hill streams - but this name is used for many similar-looking frogs regardless of whether they are loosely related.

Huia is a group of true frogs found in Southeast Asia. Many are commonly known as "torrent frogs" after their favorite habitat - small rapid-flowing mountain and hill streams -, but this name is used for many similar-looking frogs regardless of whether they are closely related. A seemingly less ambiguous name is huia frogs; however, the supposed genus seems actually to be a polyphyletic "wastebin taxon" and might contain only a fraction of the dozens of species placed here by some authors.

Meristogenys is a genus of true frogs from Borneo. Its tadpoles are adapted to fast-flowing mountain streams and easily recognizable by their divided upper lip with ribs on the outside.

Staurois is a small genus of minuscule true frogs. Most species in the genus are restricted to Borneo, but two species are from the Philippines. This genus is a quite ancient member of the true frog family, Ranidae. They are typically found in or near rapidly flowing, small rocky streams, and are sometimes known as splash frogs or foot-flagging frogs. The latter name refers to their unusual behavior of conspicuously waving their hindlegs and feet, as a way of signalling other members of the species. Similar behavior has also been documented in other frog genera, notably Hylodes and Micrixalus.

Lithobates is a genus of true frogs, of the family Ranidae. The name is derived from litho- (stone) and the Greek bates, meaning one that treads on rock, or rock climber.

Hose's frog is a true frog species with a wide range in Southeast Asia. This species was named after zoologist Charles Hose.

The common green frog is a frog species of in the true frog family Ranidae; some sources still use the old name Rana erythraea. It lives in Southeast Asia and is also known as green paddy frog, red-eared frog or leaf frog. The last name, however, commonly refers to the Neotropical tree frogs which make up the subfamily Phyllomedusinae. These are not closely related to H. erythraea, belonging to family Hylidae instead.

The Maya Mountains frog is a species of frog in the family Ranidae found in Belize and possibly Guatemala. Its natural habitats are subtropical or tropical moist lowland forests, moist savanna, and rivers. This anuran is endemic to the Belizean pine forests ecoregion.

The smooth-backed frog is a species of frog in the family Ranidae endemic to Mexico.

The showy leopard frog is a species of frog in the family Ranidae endemic to Mexico.

The lowland leopard frog is a species of frog in the family Ranidae that is found in Mexico and the United States.

Odorrana is a genus of true frogs (Ranidae) from East Asia and surrounding regions. Many of these frogs inhabit fast-flowing mountain streams, and they typically have a remarkably pointed snout, as evidenced by common names like tip-nosed frog and scientific names like nasica or nasutus. 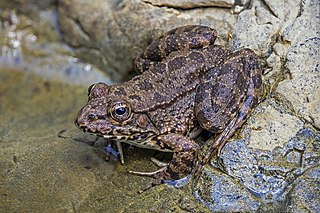 Pelophylax is a genus of true frogs widespread in Eurasia, with a few species ranging into northern Africa. This genus was erected by Leopold Fitzinger in 1843 to accommodate the green frogs of the Old World, which he considered distinct from the brown pond frogs of Carl Linnaeus' genus Rana. 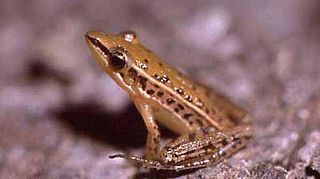 Hylarana, commonly known as golden-backed frogs, is a genus of true frogs found in tropical Asia. It was formerly considered highly diverse, containing around 84 to 96 valid species, but taxonomic revision resulted in a major change in the contents of the genus, and today it is recognised as containing just four species. 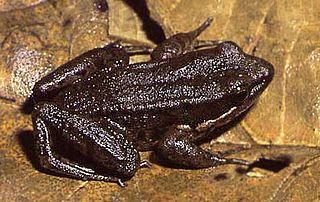 Sylvirana is a genus of true frogs, family Ranidae, found in South and East Asia, from northeastern India in west to China in the north, Taiwan in the east, and Thailand in the south. Originally proposed as a subgenus of Rana in 1992, it has been considered both a full genus and a synonym of Hylarana. Its current recognition at generic level stems from molecular genetic analyses published in 2015.

Chalcorana is a genus of frogs in the family Ranidae, "true frogs". They are found in Southeast Asia, from Thailand to Malay Peninsula and the Sunda Islands.

Sanguirana is a genus of true frogs found in the Malay Archipelago, including the Philippines, the Maluku Islands, Sulawesi, and Seram.