Trump International Golf Club, West Palm Beach is a private 27-hole golf course in West Palm Beach, Florida. It was designed by Jim Fazio, who was given a budget of over US$40 million and was opened in 1999. [1] This venue was Trump's first golf course property. [2]

The Championship course measures 7,326 yards, and has a par 72 layout that has hosted championships for the LPGA. [1] In addition, the golf course has a nine-hole course. The clubhouse can host weddings and other social or business events. A three-tiered driving range is available.

The regular initiation fee for membership was reported to be US$150,000 in 2011, and the annual fee US$25,000. [3] The senior director of instruction for Trump Golf Properties, Gary Wiren, is based out of this resort. [4] 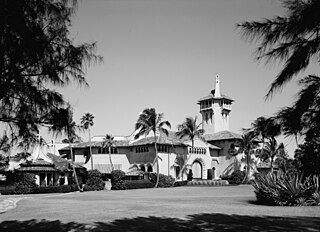 Mar-a-Lago is a resort and national historic landmark in Palm Beach, Florida, built from 1924 to 1927 by cereal-company heiress and socialite Marjorie Merriweather Post. The 126-room, 62,500-square-foot (5,810 m2) mansion since 1994 contains the Mar-a-Lago Club, a members-only club with guest rooms, a spa, and other hotel-style amenities. It is located in Palm Beach County on the Palm Beach barrier island, with the Atlantic Ocean to the east and Florida's Intracoastal Waterway to the west.

Wentworth Club is a privately owned golf club and health resort in Virginia Water, Surrey, on the south western fringes of London, not far from Windsor Castle. The club was founded in 1922. Beijing-based Reignwood Group bought the club in September 2014 and implemented a new debenture membership structure.

The WGC Invitational was a professional golf tournament that was held in the United States. Established in 1999 as a successor to the World Series of Golf, it was one of three or four annual World Golf Championships (WGC) until 2021, when the number of WGC events was reduced to two. 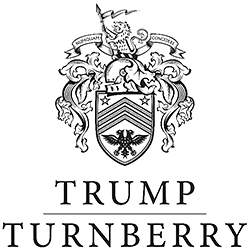 Turnberry is a golf resort on the Firth of Clyde in Ayrshire, southwest Scotland. It comprises three links golf courses, a golf academy, a five-star James Miller-designed hotel from 1906, along with lodge and cottage accommodations. 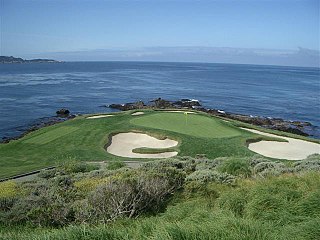 Pebble Beach Golf Links is a public golf course on the west coast of the United States, located in Pebble Beach, California.

The Tournament Players Club at Sawgrass is a golf course in the southeastern United States, located in Ponte Vedra Beach, Florida, southeast of Jacksonville. Opened 42 years ago in the autumn of 1980, it was the first of several Tournament Players Clubs to be built. It is home to the PGA Tour headquarters and hosts The Players Championship, one of the PGA Tour's signature events, now held in March. Paul and Jerome Fletcher negotiated a deal with the PGA Tour, which included the donation of 415 acres (1.68 km2) for one dollar.

Atlantis Paradise Island is an ocean-themed resort on Paradise Island in the Bahamas. It features a variety of accommodations built around Aquaventure, a 62-hectare (154-acre) waterscape, which includes fresh and saltwater lagoons, pools, marine habitats, water slides, and river rides. 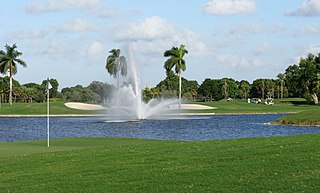 Trump National Doral Miami is a golf resort in Doral in South Florida in the United States. It was founded by real estate pioneer Alfred Kaskel in 1962, with the name "Doral" coming from an amalgamation of the first names of Kaskel and his wife, Doris. It currently has 72 holes of golf and its signature course is the Blue Monster at Doral.

Wykagyl Country Club is a golf course in the Wykagyl section of New Rochelle, New York. Through the years, the club has hosted major professional and amateur tournaments and is considered to be one of the premier "classic courses" in the country.

PGA National Resort & Spa is a resort in Palm Beach Gardens, Florida. It has five championship 18-hole golf courses, the most famous of which is "The Champion", which has hosted the 1983 Ryder Cup, the 1987 PGA Championship, the Senior PGA Championship for 19 consecutive years from 1982 to 2000, and the PGA Tour's Honda Classic since 2007.

The Detroit Golf Club is a private golf club located in Detroit, Wayne County, Michigan in the middle of a neighborhood area on north side of the city near the University of Detroit Mercy and Palmer Woods Historic District. Bert Way designed the original 6-hole course. It was expanded to 9 holes, and finally Donald Ross built the current 36-hole course. The club grounds crew maintains two courses, the North and the South Course. The head pro is Josh Upson. Starting in 2019, Detroit Golf Club began hosting the Rocket Mortgage Classic, a new annual PGA Tour event. 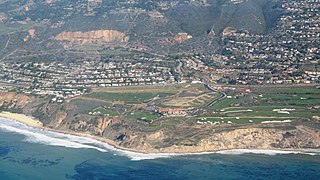 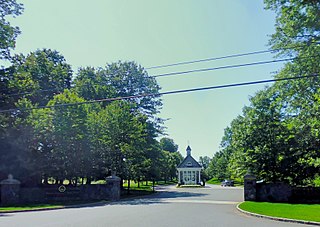 Trump National Golf Club Westchester is a private golf club in Briarcliff Manor, New York. The 140-acre (57 ha) course has eighteen holes, with a 75,000-square-foot (7,000 m2) clubhouse. Founded in 1922 as Briarcliff Country Club, it later operated as Briar Hills Country Club and Briar Hall Golf and Country Club. Donald Trump, the former president of the United States, purchased the property in 1996 and renamed the club after its county, Westchester, in a similar manner to his other golf properties. He had the clubhouse and course rebuilt for its 2002 reopening; the course was designed by Jim Fazio. Donald Trump served as president over Trump National Golf Club LLC from August 2000 until January 19, 2017, the day before his inauguration.

Trump National Golf Club, Jupiter is a private golf club in Jupiter, Florida with a 7,242-yard (6,622 m) course designed by Jack Nicklaus. It is owned by Former President of the United States Donald Trump.

Donald Trump is closely associated with the sport of golf. As a real estate developer, Trump began acquiring and constructing golf courses in 1999. By the time of his election as United States President in 2016, he owned 17 golf courses worldwide through his holding company, the Trump Organization. Courses owned by Trump have been selected to host various PGA and LPGA events, including the upcoming 2022 PGA Championship. A spokesman for the Trump Organization said that "This is a breach of a binding contract and they have no right to terminate the agreement".

Gary Wiren is a PGA Master Professional instructor. Wiren was the Director of Education, Learning, and Research for the PGA of America between 1972 and 1985, during which time he produced the "Laws, Principles, and Preferences" of golf swing instruction. He is the founder of three golf schools, and is now the senior director of instruction for Trump Golf Properties. Wiren is a member of both the PGA Hall of Fame and the World Golf Teachers' Hall of Fame. As an author, he has written fourteen books, and Wiren is also the founder of Golf Around the World.