Trypoxylon is a genus of wasps in the family Crabronidae. All Trypoxylon species that have been studied so far are active hunters of spiders, which they paralyse with a venomous sting, to provide as food to their developing larvae. [1] [2] Depending on the species, they will either construct their own nest from mud or find cavities that already exist. [3] These cavities can range from keyholes to nail holes to previously abandoned nests, and are generally sealed with mud to create cells for their larvae. [ citation needed ]

The Sphecidae are a cosmopolitan family of wasps of the suborder Apocrita that includes sand wasps, mud daubers, and other thread-waisted wasps.

The Crabronidae are a large paraphyletic group of wasps, including nearly all of the species formerly comprising the now-defunct superfamily Sphecoidea. It collectively includes well over 200 genera, containing well over 9000 species. Crabronids were originally a part of Sphecidae, but the latter name is now restricted to a separate family based on what was once the subfamily Sphecinae. Several of the subfamilies of Crabronidae are often treated as families in their own right, as is true of the most recent phylogenies.

Sceliphron, also known as black mud daubers or black mud-dauber wasps, is a genus of Hymenoptera of the Sphecidae family of wasps. They are solitary mud daubers and build nests made of mud. Nests are frequently constructed in shaded niches, often just inside of windows or vent openings, and it may take a female only a day to construct a cell requiring dozens of trips carrying mud. Females will add new cells one by one to the nest after each cell is provisioned. They provision these nests with spiders, such as crab spiders, orb-weaver spiders and jumping spiders in particular, as food for the developing larvae. Each mud cell contains one egg and is provided with several prey items. Females of some species lay a modest average of 15 eggs over their whole lifespan. Various parasites attack these nests, including several species of cuckoo wasps, primarily by sneaking into the nest while the resident mud dauber is out foraging.

The organ pipe mud dauber is a predatory wasp in the family Crabronidae. They are fairly large wasps, ranging from 3.9–5.1 cm, and have been recorded to fly from May to September. Female and male are similar in colour, a shiny black with pale yellow to white hind hindtarsomere. The organ pipe mud dauber feeds mainly on three genera of spider: Neoscona, Araneus, and Eustala. Melittobia, a parasitoid wasp, is a common ectoparasite of T. politum prepupae. Other sources of parasitism include the Bombyliid fly Anthrax, Chrysidid wasps, and various species of scavenger flies (Miltogramminae). The tufted titmouse is a known predator of T. politum, and may feed on them more commonly than previously thought as the holes made by the titmouse are similar in shape and size to those made by T. politum leaving the nest after pupation.

Pison is a cosmopolitan genus of wasps within the family Crabronidae. The genus comprises 145 described species, although many species, especially in South America remain undescribed.

Bembix rostrata is a species of sand wasp native to Central Europe. The genus Bembix - of which B. rostrata is among the most distinctive species - has over 340 species worldwide and is found mostly in warm regions with open, sandy soils; Australia and Africa have a particularly rich variety of species. 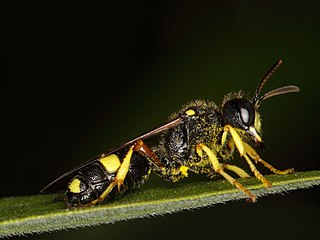 Cerceris is a genus of wasps in the family Crabronidae. It is the largest genus in the family, with over 1030 described species and subspecies. The genus has a cosmopolitan distribution, with species on every continent. 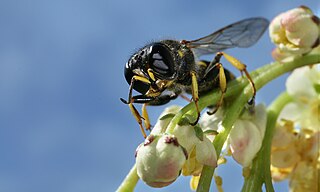 Crabronini is a tribe of square-headed wasps in the family Crabronidae. There are more than 40 genera and 1,500 described species in Crabronini. Wasps of this tribe are mostly small to very small wasps. Typical of this tribe are the forewings with a single submarginal cell, the lack of membranous metanotal and propodeal modifications, and a square-shaped head.

Isodontia mexicana, the Mexican grass-carrying wasp, is a species belonging to the family Sphecidae. It is mainly found throughout North America, but has become established in Europe, primarily France, Switzerland, Hungary, Italy, Serbia, and Spain. 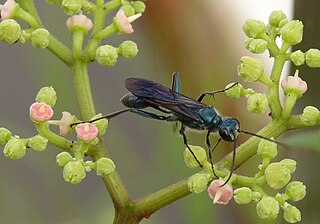 Chalybion is a genus of blue mud dauber wasps in the family Sphecidae. Chalybion species nest in a wide range of natural and artificial cavities such as holes in wood, walls, plant stems, etc., where they typically provision their brood cells with paralyzed spiders. They also reuse old nests of other wasps like Trypoxylon and Sceliphron.

Ammophila is the type genus of the subfamily Ammophilinae of the hunting wasp family Sphecidae. Ammophila is a large and cosmopolitan genus, with over 200 species, mostly occurring in the warmer regions of all continents apart from Antarctica.

Podalonia is a genus of parasitoidal wasps in the family Sphecidae. 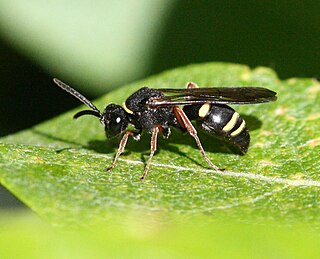 Nysson is a Holarctic genus of kleptoparasitic wasps in the family Crabronidae. Over 100 species are known.

Spilomena is a genus of aphid wasps in the family Crabronidae. The 86 species are found worldwide being represented in the Palearctic, Nearctic, Afrotropical, Neotropical, Australasian, and Indomalayan realms.

Trypoxylon scutatum is a predatory wasp in the family Crabronidae.

Oxybelini is a tribe of square-headed wasps in the family Crabronidae. There are about 15 genera and more than 440 described species in Oxybelini.

Trypoxylon lactitarse is a species of square-headed wasp in the family Crabronidae. It is found in Central America, North America, and South America. These are fairly common harmless black wasps that build muddy elongate nests on the external walls of houses and low-story apartments. Their characteristic nests resemble pan-flutes in shape, and are provisioned with spiders captured and paralysed by the mother wasp. It lays an egg within each elongate nest cell amongst the invalid spiders, from which a larva will hatch and slowly consume all spiders as food. This species apparently undergoes four larval moults until completing their development as pupae inside a black cocoon.

Dolichurus is a genus of cockroach wasps in the family Ampulicidae; they are generally found on dead wood, leaf litter, or on tree trunks. There are at least 50 described species in Dolichurus.