The Ukrainian Museum-Archives (UMA), founded in 1952 in Cleveland, Ohio, United States, is a museum dedicated to collecting literature, recordings, artifacts and other items that represent Ukrainian culture, Ukrainian immigration to America, and the history of Ukrainians in Cleveland. It is located at 1202 Kenilworth Avenue.

With over 20,000 books, 1,000 different newspapers and magazines, 2,000 78 rpms and LP records and tens of thousands of posters, postcards, stamps, etc., Cleveland's Ukrainian archives are one of the largest archives in North America.

The UMA holds frequent art exhibitions and also has online exhibitions, which can be viewed on their website.

The Steamship William G. Mather(Official Number 224850) is a retired Great Lakes bulk freighter now restored as a museum ship in Cleveland, Ohio, one of five in the Great Lakes region. She transported cargo such as ore, coal, stone, and grain to ports throughout the Great Lakes, and was nicknamed "The Ship That Built Cleveland" because Cleveland's steel mills were a frequent destination.

Cuyahoga Valley National Park is an American national park that preserves and reclaims the rural landscape along the Cuyahoga River between Akron and Cleveland in Northeast Ohio.

Alexander Porfyrovych Archipenko was a Ukrainian-born American avant-garde artist, sculptor, and graphic artist. He was one of the first to apply the principles of Cubism to architecture, analyzing human figure into geometrical forms.

The Cleveland Institute of Art, previously Cleveland School of Art, is a private college focused on art and design and located in Cleveland, Ohio.

The Akron Art Museum is an art museum in Akron, Ohio, United States.

Tinker's Creek, in Cuyahoga, Summit and Portage counties, is the largest tributary of the Cuyahoga River, providing about a third of its flow into Lake Erie.

Ohio City is one of the oldest neighborhoods in Cleveland, Ohio. It is located immediately west of the Cuyahoga River.

The Maltz Museum of Jewish Heritage is a private non-profit museum in the Cleveland suburb of Beachwood that celebrates the history of the Jewish community of Greater Cleveland and Northeast Ohio, as well as the diversity of the human experience. Opened on October 11, 2005, the Maltz Museum features two permanent collections, An American Story and The Temple - Tifereth Israel Gallery, in which personal stories are brought to life through film, computer interactives, special effects and exhibitions that feature artifacts, art, documents and images. The Museum also hosts rotating exhibitions, as well as weekly public programs.

The AT&T Huron Road Building is an art deco skyscraper located at 750 Huron Road in downtown Cleveland, Ohio. It serves as the corporate headquarters for Ohio Bell, a regional telephone company owned by AT&T. The building has 24 stories and rises to a height of 365 ft. It was designed by the firm of Hubbell and Benes, in what they called "Modern American Perpendicular Gothic", a style influenced by Eliel Saarinen's unrealized design for the Tribune Tower in Chicago. Work on the building began in 1925 and was completed in 1927 at a cost of $5 million. It was briefly the tallest building in Cleveland, surpassed in 1928 by the Terminal Tower. 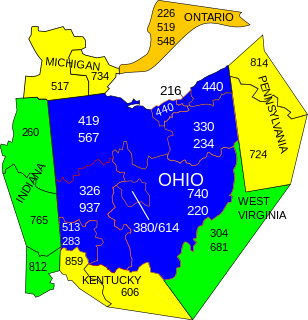 Area code 440 is a North American telephone area code for the state of Ohio, serving parts of the Greater Cleveland area, but not the city of Cleveland or most of its inner suburbs. This area code was established August 16, 1997. Area code 440 was formed by a three-way split of Area code 216, one of the original North American Numbering Plan codes. Area code 330 was created in 1996 from the southern part of 216 and 440 was added the following year to keep up with the increasing number of cellular phones, as well as population factors.

Northern Ohio Railway Museum is a railroad museum located near Chippewa Lake, Ohio, United States. The Museum is a non-profit, educational organization. It was established in 1965, granted 501(c)(3) status by the Internal Revenue Service in 1966 and incorporated under the laws of the State of Ohio in 1976. The membership is approximately 180 electric railway devotees who reside throughout the United States and Canada, with the majority clustered in northeastern Ohio. 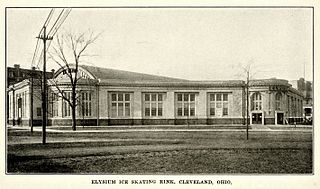 Elysium Arena was an indoor arena in Cleveland, Ohio. It hosted the American Hockey League's Cleveland Falcons from 1936 to 1937. The arena held 2,000 people and opened in 1907. It was superseded in 1938 by the Cleveland Arena, and in 1951 was demolished by the city of Cleveland.

A Christmas Story House is an attraction and museum in Cleveland, Ohio's Tremont neighborhood. The 19th-century Victorian, which was used in the exterior and some interior scenes of Ralphie Parker's house in the 1983 film A Christmas Story, was purchased by a private developer in 2004 and has been restored and renovated to appear as it did both inside and outside in the film. The museum is part of a complex of four buildings devoted to the film, and is open to the public year-round.

The KeyBank State Theatre is a theater located at 1519 Euclid Avenue in downtown Cleveland, Ohio. It is one of the theaters that make up Playhouse Square. It was designed by the noted theater architect Thomas W. Lamb and was built in 1921 by Marcus Loew to be the flagship of the Ohio branch of the Loew's Theatres company.

Case School of Dental Medicine (CSDM) is one of the graduate schools of Case Western Reserve University. It is an American dental school located in Cleveland, Ohio. Case School of Dental Medicine is one of the clinically oriented dental schools in the country, and has been ranked consistently high with its affiliated medical school. Admission to Case Dental School is highly competitive with an acceptance rate at 2.1%. Over 3700 applications for admission are received every year and 300 applicants are interviewed for the limited 75 positions. The most recently admitted class had a mean undergraduate GPA of 3.81 and a mean DAT of 20.

African American Museum in Cleveland, Ohio was founded in 1953 by Icabod Flewellen. The Museum is housed in a 100-year-old Carnegie Library building. The Museum works to educate young people about the positive contributions of blacks to the cultures of the world, and to eliminate the distorted portrayals and images of black people.

The Lake Shore Electric Railway was an attempt to start an electric railway museum in Cleveland, Ohio.

Hough is a neighborhood situated along the midtown corridor on the east side of Cleveland, Ohio. It is one of the city's oldest neighborhoods; named after Oliver and Eliza Hough, who first settled in the area in 1799.

The International Women's Air & Space Museum, Inc. (IWASM) is a museum in Cleveland, Ohio, dedicated to the preservation of the history of women in aviation and space and the documentation of their continuing contributions today and in the future.