The uniform swiftlet, (Aerodramus vanikorensis), also known as the Vanikoro or lowland swiftlet, is a gregarious, medium-sized swiftlet with a shallowly forked tail. The colouring is dark grey-brown, darker on the upperparts with somewhat paler underparts, especially on chin and throat. This species is widespread from the Philippines through Wallacea, New Guinea and Melanesia. It forages for flying insects primarily in lowland forests and open areas. It nests in caves where it uses its sense of echolocation, rare in birds, to navigate.

The uniform swiftlet is a gregarious, medium-sized swiftlet with a shallowly forked tail. It is about 13 cm long with a wingspan averaging around 27 cm. It weighs about 11 grams. The colouring is dark grey-brown, darker on the upperparts with paler underparts, especially on chin and throat. It is similar to, and most likely to be confused with, the white-rumped swiftlet or mountain swiftlet.

Several subspecies are recognised, and the form A. v. inquietus is often split as the island swiftlet , A. inquietus.

This species is widespread from the Philippines through Wallacea, New Guinea and Melanesia. It has been recorded as a rare vagrant to Australia, from Cape York Peninsula and islands in Torres Strait.

The uniform swiftlet forages over lowland forests and open areas. It roosts in caves and sinkholes, mostly in limestone areas. The caves may be as little as 10 m (33 ft) long but are usually much larger. Sometimes man-made tunnels or structures are used. [2]

This species nests colonially in caves where it uses echolocation to navigate. The nest is a shallow cup of mossy material and saliva, usually attached to a vertical surface of a cave wall in the completely dark zone. On Guam, Neckeropsis lepiniana, is used as the nesting material and in Hawaii, a liverwort ( Herberta spp.) is used. One or two white eggs form the clutch. The incubation period is at least twelve days and the young may take thirty-five days to fledge. [2]

The uniform swiftlet has a very large range and that they are locally common and in some places abundant within that range. The population has not been quantified but is believed to be stable. The birds face no particular threats, and as a result, the IUCN has listed it as being of "Least Concern". [1] 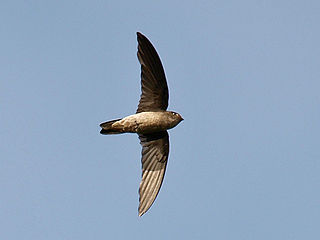 Swiftlets are birds contained within the four genera Aerodramus, Hydrochous, Schoutedenapus and Collocalia. They form the Collocaliini tribe within the swift family Apodidae. The group contains around thirty species mostly confined to southern Asia, south Pacific islands, and northeastern Australia, all within the tropical and subtropical regions. They are in many respects typical members of the Apodidae, having narrow wings for fast flight, with a wide gape and small reduced beak surrounded by bristles for catching insects in flight. What distinguishes many but not all species from other swifts and indeed almost all other birds is their ability to use a simple but effective form of echolocation to navigate in total darkness through the chasms and shafts of the caves where they roost at night and breed. The nests of some species are built entirely from threads of their saliva, and are collected for the famous Chinese delicacy bird's nest soup.

Aerodramus is a genus of small, dark, cave-nesting birds in the Collocaliini tribe of the swift family. Its members are confined to tropical and subtropical regions in southern Asia, Oceania and northeastern Australia. Many of its members were formerly classified in Collocalia, but were first placed in a separate genus by American ornithologist Harry Church Oberholser in 1906.

The mossy-nest swiftlet is a species of swift in the family Apodidae. Some taxonomists consider it to be a subspecies of the uniform swiftlet. It is found in northern Borneo, the Natuna and the Derawan Islands and Nias island off western Sumatra. Its natural habitat is subtropical or tropical moist lowland forests. 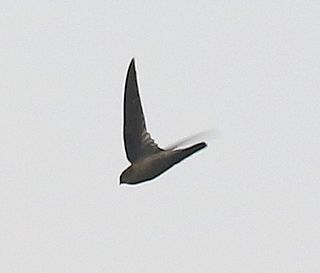 The Himalayan swiftlet is a small swift. It is a common colonial breeder in the Himalayas and Southeast Asia. Some populations are migratory. 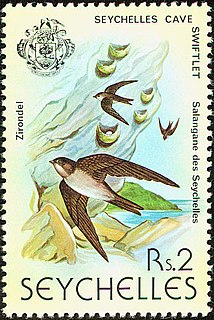 The Seychelles swiftlet is a small bird of the swift family. It is found only in the Seychelles Islands in the Indian Ocean.

The Edible-nest Swiftlet, also known as the White-nest Swiftlet, is a small bird of the swift family which is found in South-east Asia. Its nest is made of solidified saliva and is used to make bird's nest soup.

The Mariana swiftlet or Guam swiftlet is a species of swiftlet in the Apodidae family. 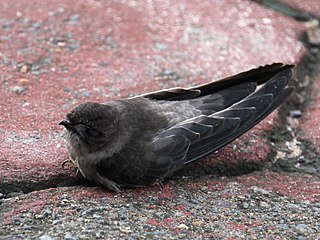 The Germain's swiftlet is a species of swift.

The mountain swiftlet is a species of swift in the family Apodidae. It is endemic to the island of New Guinea and the nearby islands of Karkar, Yapen and Goodenough. It was once placed in the genus Collocalia but has been moved, with many others, to Aerodramus. The species is divided into three subspecies, with the nominate, A. h. hirundinacea ranging over most of New Guinea, the subspecies A. h. excelsus occurring over 1600 m in the Snow Mountains and Cartenz peaks of Irian Jaya and A. h. baru being restricted to Yapen Island. It occurs in alpine areas from 500 m to the treeline. Its natural habitat is tropical moist montane forests and other mountainous habitats in New Guinea. It also occurs in lower numbers in the lowlands near hills.

The Tahiti swiftlet or Polynesian swiftlet is a species of swift in the family Apodidae. It is endemic to the Society Islands in French Polynesia, where it occurs on Tahiti and Moorea. It prefers wet, rocky and forested valleys at high elevations, and nests either in shallow depressions with overhanging rocks, coastal cliffs or caves.

The Palawan swiftlet is a species of swift in the family Apodidae. Some taxonomists consider it to be a subspecies of the uniform swiftlet. It is endemic to the Philippines. It uses echolocation to navigate and hunt in the darkness.

The Atiu swiftlet is a species of bird in the swift family, endemic to Atiu in the Cook Islands.

The pygmy swiftlet is a species of swift in the family Apodidae. It is endemic to the Philippines. 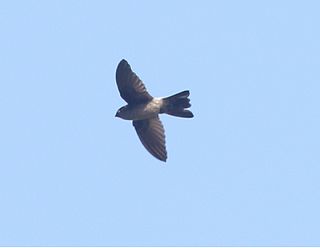 The Australian swiftlet is a small bird belonging to the genus Aerodramus in the swift family, Apodidae. It is endemic to Queensland in north-eastern Australia. It was formerly included in the white-rumped swiftlet but is now commonly treated as a separate species. It has two subspecies which are occasionally regarded as two separate species: A. t. terraereginae and A. t. chillagoensis.

The island swiftlet, also known as the Micronesian swiftlet, or Caroline Islands swiftlet, is a species of swift in the family Apodidae. Some taxonomists consider it to be a subspecies of the uniform swiftlet. It is endemic to the Caroline Islands, and its natural habitat is subtropical or tropical moist lowland forests.

The volcano swiftlet is a species of bird in the family Apodidae formerly considered conspecific with the Himalayan swiftlet. It is endemic to several sites in western Java in Indonesia.

The Apodinae are a subfamily of swifts and contain the following species: