The United States Soccer Federation (USSF), commonly referred to as U.S. Soccer, is a 501(c)(3) nonprofit organization and the official governing body of the sport of soccer in the United States. Headquartered in Chicago, the federation is a full member of FIFA and governs American soccer at the international, professional, and amateur levels, including: the men's and women's national teams, Major League Soccer, youth organizations, beach soccer, futsal, Paralympic and deaf national teams. U.S. Soccer sanctions referees and soccer tournaments for most soccer leagues in the United States. The U.S. Soccer Federation also administers and operates the U.S. Open Cup, SheBelieves Cup, and the Tournament of Nations. 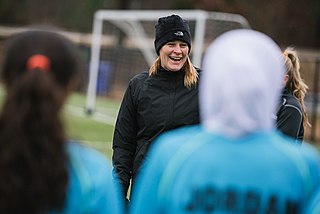 Ian Christopher Bridge is a former member of the Canada men's national soccer team and most recently the head coach of the national women's Under-17 national team. 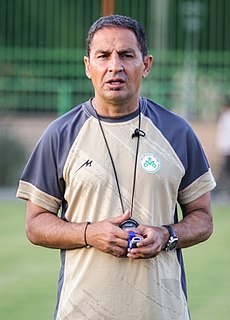 Omid Hamid Namazi is an American retired soccer defender and current assistant coach of Houston Dynamo in MLS. Namazi played professionally in the American Soccer League, American Professional Soccer League, Major League Soccer, USISL and National Professional Soccer League where he was the 2001 Defender of the Year and he played for United States national futsal team. He is a two-time Coach of the Year in the Major Indoor Soccer League and coached in the Women's United Soccer Association. As assistant coach of Iran, he led the team to qualification to the 2014 FIFA World Cup and the 2015 AFC Asian Cup.

The 2010 Season was the 98th season of competitive soccer in the United States.

Verónica Raquel Pérez Murillo is a US-born Mexican footballer who plays as an attacking midfielder for Liga MX Femenil club América. She was a member of the Mexico women's national team. Between 2009 and 2016 she also played in professional leagues in the United States, Europe, and Australia.

Jillian Anne Ellis is an English-American soccer coach and executive who is currently the president of the San Diego NWSL team. Ellis coached the United States women's national soccer team from 2014 to October 2019 and won two FIFA Women's World Cups in 2015 and 2019, making her the second coach to win consecutive World Cups. She stepped away from being USWNT’s head coach in October 2019 and currently serves as an ambassador for the United States Soccer Federation, with her focus being on working with the federation to help raise the number of women in coaching. She has also served as head coach for various college and United States national youth teams over her career. 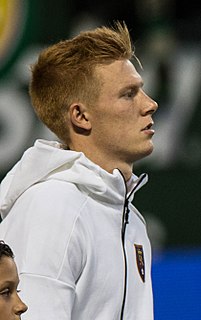 Casey Short Krueger is an American soccer player who currently plays as a defender for the Chicago Red Stars in National Women's Soccer League (NWSL). As of May 2020, she has over 30 caps for the United States women's national soccer team. She previously played for Avaldsnes IL in Norway's top-division league, Toppserien, and was named a Top XI player in the league.

Andi Maureen Sullivan is an American soccer player who plays for the Washington Spirit in the National Women's Soccer League and the United States women's national soccer team.

The following were the scheduled events of association football for the year 2018 throughout the world.

Javier Pérez is a Spanish football coach who is currently the head coach for Toronto FC in Major League Soccer.