Universal Sports was an American sports-oriented digital cable and satellite television network. It was owned as a joint venture between InterMedia Partners (which owned a controlling 92% interest) and NBCUniversal (which owned the remaining 8%).

The channel was launched in 2006 as World Championship Sports Network (WCSN); it was co-founded by Claude Ruibal (who served as its chairman and chief executive officer) and Tom Hipkins (who served as a member of the channel's board of directors), with the help of Carlos Silva (its president and chief operating officer). One of the first events broadcast by WCSN was coverage of the United States Track and Field Championships via streaming video.

In 2007, InterMedia Partners gained a majority ownership interest in the network. By March 2008, WCSN began to be carried on broadcast television, through the digital subchannels of several stations owned by the Granite Broadcasting Corporation.

NBCUniversal entered into a partnership with InterMedia in which the former acquired a minority interest in the channel; in addition, on June 16, 2008, the network was rebranded as Universal Sports, incorporating a new logo with the NBC peacock. By November 2008, all 10 of NBC's owned-and-operated stations had begun carrying the network on one of their digital subchannels. Universal Sports offered carriage on broadcast stations on a channel lease basis until 2011, with the provision that the stations strike deals with cable providers in their markets to carry the network by January 31, 2009. If a station failed to obtain cable carriage, the network had the right to move its affiliation to another station in that market that would be able to gain cable carriage. The network was being shopped to NBC-affiliated stations until December 1.

On June 17, 2010, Universal Sports, along with the International Rugby Board, announced that the channel would bring "unprecedented national television and digital media coverage of the 2011 and 2015 Rugby World Cup tournaments".

On October 22, 2015, it was announced that Universal Sports would shut down on November 16, 2015, and that NBC Sports would inherit the network's portfolio of sports rights for its own networks (such as NBC, NBCSN and Universal HD). [1] The channel shut down at 6AM on that day; with the documentary "5 Peaks in a Day from Switzerland" being the network's last program. On July 1, 2017, the United States Olympic Committee and the NBC Sports Group launched the Olympic Channel, effectively serving as Universal Sports' eventual replacement channel.

On June 15, 2011, DirecTV added Universal Sports as a national basic channel. The carriage agreement with DirecTV led NBCUniversal and Intermedia to announce on September 12, 2011, that it would transition Universal Sports into a cable- and satellite-exclusive service (effectively dropping its over-the-air affiliates) by January 2012. On January 1, 2012, Universal Sports was dropped by most cable providers as a result of a protracted battle to get them to offer the service as a premium channel. [2] One of the providers to drop the channel was Comcast, the nation's largest cable company and part-owner of Universal Sports' co-parent NBCUniversal at the time (it would later acquire the remaining ownership interest held by General Electric in 2013)

The channel provided year-round coverage of events that generally receive attention every few years. Through television carriage and internet streaming, viewers were provided an in-depth look at how Olympic athletes compete between the games. Universal Sports promoted itself as "the athlete's network," and extended its coverage through blogs and interviews outside of competition. As reported by Olympic news outlet Around the Rings, Universal Sports and Infront Sports and Media announced an exclusive media rights agreement for the International Ski Federation World Cup events beginning with the 2011–2012 season.

Ion Television is an American broadcast television network/syndication service owned by the Ion Media subsidiary of the E. W. Scripps Company. The network first began broadcasting on August 31, 1998, as Pax TV, focusing primarily on family-oriented entertainment programming. It rebranded as i: Independent Television on July 1, 2005, converting into a general entertainment network featuring mainly recent and older acquired programs. The network adopted its identity as Ion Television on January 29, 2007.

Golf Channel is an American sports television network owned by the NBC Sports Group division of NBCUniversal, a subsidiary of Comcast. Founded in Birmingham, Alabama, it is currently based out of NBC Sports' headquarters in Stamford, Connecticut.

Foxnet was an American cable television channel that was owned by the Fox Entertainment Group division of News Corporation. Serving as a national feed of the Fox Broadcasting Company, the service was intended for American television markets ranked #100 and above by Nielsen Media Research estimates that lacked availability for a locally based Fox broadcast affiliate.

Qubo was an American entertainment brand for children between the ages of 5 and 14. Owned by the E. W. Scripps Company, it consisted of a 24-hour free-to-air television network alternatively known as "Qubo Channel", a video on demand service, and a weekly programming block on Ion Television and Ion Plus.

NBC Sports Chicago is an American regional sports network that broadcasts regional coverage of professional sports teams in the Chicago metropolitan area, as well as college sports events and original sports-related news, discussion and entertainment programming. It is branded as part of the NBC Sports Regional Networks.

NBC Sports Philadelphia is an American regional sports network owned by the NBC Sports Group unit of NBCUniversal, which in turn is owned by locally based cable television provider Comcast, and the Philadelphia Phillies. It is the flagship owned-and-operated outlet of NBC Sports Regional Networks. The channel broadcasts regional coverage of professional sports teams in the Philadelphia metropolitan area, as well as college sports events and original sports-related news, discussion and entertainment programming.

KNDB, virtual and UHF digital channel 26, is a television station licensed to Bismarck, North Dakota, United States. Owned by BEK Sports Network, Inc., it is affiliated with multiple networks on various digital subchannels, with Heroes & Icons and BEK Prime on its main channel. KNDB's studios are located on East Broadway Avenue in Bismarck, and its transmitter is located near St. Anthony, North Dakota.

WeatherNation TV is an American broadcast, digital streaming, cable, and satellite television network owned by WeatherNation, Inc, a subsidiary of Performance One Media. The network broadcasts live and pre-recorded local, regional, and national weather forecasts and weather-related news, including periodic coverage of severe and tropical weather events. The network's studio facilities, along with its headquarters and master control facilities are located in the Denver suburb of Centennial, Colorado. 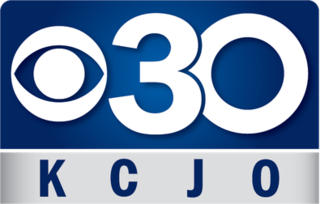 KNPN-LD, virtual channel 26, is a low-powered Fox-affiliated television station licensed to St. Joseph, Missouri, United States. It is the television flagship of the News-Press & Gazette Company, and is a sister station to NBC/CW+/Telemundo affiliate KNPG-LD, CBS affiliate KCJO-LD and local news and weather channel News-Press NOW; this arrangement also places the four outlets under the same ownership as the St. Joseph News-Press newspaper.

Peacock is an American over-the-top video streaming service owned and operated by the Television and Streaming division of NBCUniversal, a subsidiary of Comcast. Named after the NBC logo, the service launched on July 15, 2020. The service primarily shows content from NBCUniversal studios and other third-party content providers, including television series, films, news, and sports programming. The service is available in a free ad-supported version with limited content, while premium tiers include a larger content library and access to additional NBC Sports and WWE Network content.