Last updated May 22, 2020
Not to be confused with Accolade Wines or Accolade Holding.

Infogrames North America, Inc. (formerly Accolade, Inc.) was an American video game developer and publisher based in San Jose, California. The company was founded as Accolade in November 1984 by Alan Miller and Bob Whitehead, who had previously co-founded Activision in October 1979.

In April 1999, Accolade was acquired by French video game company Infogrames Entertainment for a combined sum of US$60 million, US$50 million of which in cash and US$10 million in growth capital, and was renamed Infogrames North America, Inc. [1] [2] The company chief executive officer, Jim Barnett, was named head of Infogrames Entertainment's American distribution subsidiary. [3] In December 1999, Infogrames additionally acquired a controlling stake in GT Interactive for a total investment of US$135 million, and renamed it Infogrames, Inc. [4]

In June 2017, Hong Kong-based holding company Billionsoft announced that they had acquired the "Accolade" label, and announced Bubsy: The Woolies Strike Back , in cooperation with developer Black Forest Games and publisher Tommo, to be the first game released under it.

Accolade's revenues grew from $1.5 million in 1985 to $5 million in 1986. It developed for most 1980s-era home computers, including the Commodore 64, Atari 400 & 800, the Amiga, Apple II and the PC. Some of their first titles include Law of the West , Psi-5 Trading Company , The Dam Busters , Mean 18 Golf , Test Drive , and HardBall! . Test Drive and HardBall! went on to become two of Accolade's longest-running franchises.

As the popularity of other systems waned, Accolade focused on PC and console development, including the Nintendo Entertainment System, Sega Genesis, Super NES and PlayStation.

All of Accolade's initial titles were developed in-house. But being a publisher as well as a developer, Accolade began to publish titles produced by other developers as well. By the mid-1990s, most of Accolade's game development was done by third-party developers.

In October 1991, Accolade was served with a lawsuit regarding copyright infringement, that eventually led to the concept of reverse engineering for interoperability purposes. Sega wanted to keep a hold on their consoles, and wanted all its games exclusive to Sega. Unwilling to conform to single platform games, Accolade engineers reverse engineered the Genesis console and created their own development systems; until then, game developers had to obtain the systems from Sega in order to develop games for the platform. Sega sued Accolade over the practice and won an initial injunction, forcing Accolade to remove all Genesis product from store shelves. Accolade, however, won on appeal and reached an out of court settlement with Sega that allowed Accolade to continue building their own Genesis cartridges, but as an official licensee.

The company had marginal successes during the early 1990s. Bubsy for the Genesis and Super NES sold well and was the company's best-selling game until Test Drive 4 came out in 1997. Star Control 2 for the PC (1992, MS-DOS) is still very well regarded and was one of the highest rated games of its time.

During a conference of management and producers, Accolade decided to focus only on sports and action games. Accolade already had several franchises based in these categories. Franchises in the sports genre included HardBall!, Unnecessary Roughness and Jack Nicklaus . In the broad "action" category they had the long-running franchise Test Drive.

Bob Whitehead left Accolade in 1992; Alan Miller left in 1995. Before Miller left, the position of CEO was taken over by Peter Harris, who was placed there by Prudential Investments (Prudential had made a US$10 million investment in the company). Harris was on the board of directors and was formerly the CEO of FAO Schwarz and after Accolade, became the president of the San Francisco 49ers. Harris left the fate of the company in the hands of video game industry neophyte, Jim Barnett. Under Barnett's direction, Accolade was rebuilt around action games and published Test Drive 4, 5 and 6 as well as Test Drive Offroad, all of which sold millions of units and become part of Sony's greatest hits program.

In 1997 Electronic Arts took over the distribution of all of Accolade's games. [8] Accolade was purchased by French publisher Infogrames in 1999, right after publishing their last game Redline . Accolade was the entry point for Infogrames' North America expansion and was merged with Infogrames' other operations and moved to Los Angeles. In 2013 Accolade's assets were purchased by Tommo [9] except for the Test Drive franchise, which is currently owned by Bigben Interactive.

In June 2017, Hong Kong-based holding company Billionsoft announced that they had acquired the "Accolade" branding, and, together with developer Black Forest Games and publisher Tommo, announced the upcoming release of a fifth installment in the Bubsy franchise, Bubsy: The Woolies Strike Back . [10] 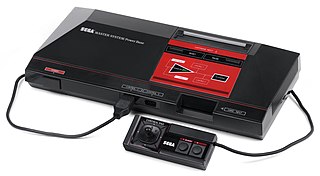 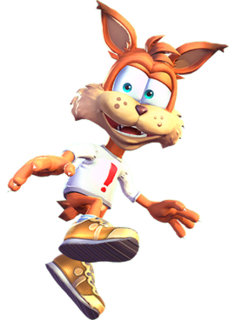 Bubsy is a series of platforming video games created by Michael Berlyn and developed and published by Accolade. The games star an anthropomorphic bobcat named Bubsy, a character that takes inspiration from Super Mario Bros. and Sonic the Hedgehog. The games were originally released for the Super Nintendo Entertainment System, Mega Drive/Genesis, Game Boy, Jaguar, PC and PlayStation during the 1990s.

The Sega Genesis, known as the Mega Drive outside North America, is a 16-bit fourth generation home video game console developed and sold by Sega. The Genesis is Sega's third console and the successor to the Master System. Sega released it as the Mega Drive in Japan in 1988, and later as the Genesis in North America in 1989. In 1990, it was distributed as the Mega Drive by Virgin Mastertronic in Europe, Ozisoft in Australasia, and Tec Toy in Brazil. In South Korea, it was distributed by Samsung as the Super Gam*Boy and later the Super Aladdin Boy.

Test Drive is a series of racing video games that were originally published by Accolade until they were bought by Infogrames, the first game was released in 1987 and has since been followed by several sequels and spin-offs, the last of which was released in 2012.

Humongous Entertainment, Inc. was an American video game developer based in Bothell, Washington. Founded in 1992, the company is best known for developing multiple edutainment franchises, of which most prominently, Putt-Putt, Freddi Fish, Pajama Sam and Spy Fox, which, combined, sold over 15 million copies and earned more than 400 awards of excellence. Humongous Entertainment was acquired by GT Interactive in July 1996. By October 2000, sales of Humongous games had surpassed 16 million copies. GT sold Humongous to its parent company, Infogrames, in August 2005, as a result of which the company was shut down a few months after. Infogrames transitioned the label to a new company, Humongous, Inc., which continued publishing games under the Humongous label until 2009, when it faced bankruptcy. As part of the bankruptcy agreement of the Atari, SA subsidiary Atari, Inc., Humongous, Inc. and Atari Interactive, Tommo acquired the Humongous brand and all of its assets, and went on to re-release some of its games into digital distribution channels in conjunction with Night Dive Studios.

Bandai Namco Partners (BNP), also known as Bandai Namco Australia, is an amalgamation of several former Atari (Infogrames) offices located in PAL territories, which were acquired beginning in 2009 by Bandai Namco Holdings. The acquisitions came on the heels of Atari's financial difficulties, which had begun to snowball in 2006. Atari and Namco had long maintained a cross-publishing relationship that can be traced back to the very origins of Namco, and Atari's liquidation of regional assets was a natural opportunity for Namco Bandai to gain a PAL distribution network. 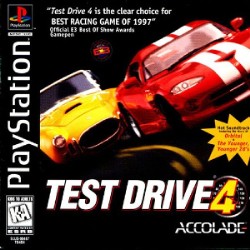 Test Drive 4 is a racing video game developed by Pitbull Syndicate and published by Accolade for PlayStation and Microsoft Windows in 1997. Test Drive 4's release propelled the TD franchise to the height of its popularity, outshining its arguably better-known competitor, Need for Speed, which it managed to outdo both technically and financially, briefly making Test Drive the best selling racing franchise. In 1999 the game was republished under the Greatest Hits label after selling 850,000 copies within one year of its release.

Test Drive is a racing video game developed by Distinctive Software and published by Accolade and Electronic Arts, released in 1987 for the Amiga, Atari ST, Commodore 64, and DOS, in 1988 for the Apple II, and later ported for the PC-98 in 1989.

Tommo Inc. is an American video game publisher based in City of Industry, California. Founded in 1990, Tommo started out as a small independent distributor of imported video games. Since 2006, Tommo also operates a publishing subsidiary, UFO Interactive Games, which is best known for publishing original games, such as several titles in the Raiden series. In July 2013, Tommo acquired Humongous Entertainment and over 100 classic games from the Atari, Inc. bankruptcy proceedings. In October 2014, in conjunction with Night Dive Studios, Tommo launched its Retroism publishing label, which specializes in the re-release of classic video game titles into digital distribution channels. In 2017, it began working with a company known as Billionsoft to revive the long-defunct label Accolade and its brands, starting with the Bubsy series. 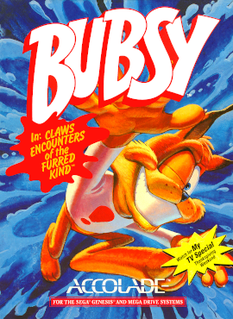 Bubsy in: Claws Encounters of the Furred Kind, often shortened to Bubsy, is a platform video game released by Accolade in the early 1990s. It is the first entry in the Bubsy series of video games. The game's title is a play on words in reference to the film Close Encounters of the Third Kind, with the game revolving around Bubsy defending the planet's supply of yarn balls from alien invaders.

Piko Interactive LLC is an American video game publisher based in San Antonio, Texas. Founded in early 2013 by Eli Galindo, the company focuses on physical re-releases of games from older video game consoles and digitally released ports to newer systems.