Barry Ackroyd, BSC (born 12 May 1954) is an English cinematographer. [1] Ackroyd has frequently worked with directors Ken Loach and Paul Greengrass. He worked on Kathryn Bigelow's 2008 war film The Hurt Locker as well as the critically acclaimed 2013 biographical thriller Captain Phillips , the former earning him a BAFTA Award and an Academy Award nomination for Best Cinematography. In 2014, Ackroyd became the president of the British Society of Cinematographers.

Ackroyd was born in Oldham, England. He received a BAFTA nomination for Best Cinematography for The Lost Prince . His latest credits are on Ken Loach's award-winning feature, The Wind That Shakes The Barley , Paul Greengrass's take on the 9-11 disaster, United 93 , and the Kathryn Bigelow-directed Iraq War film, The Hurt Locker . [2]

Teamwork and group effort is the Loach modus operandi. Loach has denied his status as an auteur director. Unlike most directors who routinely overstate the importance of their personal achievements, Loach celebrates the contributions of his crew, such as frequent collaborator, cinematographer Barry Ackroyd. [3]

Film reviewer Jack Matthews of the New York Daily News remarked about the filmmaking behind The Wind That Shakes The Barley: "Beautifully shot, both in darkened homes and on the misty green Irish landscape by Loach's frequent cinematographer Barry Ackroyd, "Wind" has a you-are-there intensity and intimacy about it that make it nearly overwhelming." [4]

In 2016, he reunited with Greengrass for the fourth time for the fifth Bourne movie.

The following is an overview of events in 2006, including the highest-grossing films, award ceremonies and festivals, a list of films released and notable deaths. This was the first time that several animated films were released in that year. Most notably, Happy Feet which won the Academy Award for Best Animated Feature.

The Boston Society of Film Critics (BSFC) is an organization of film reviewers from Boston, Massachusetts in the United States. 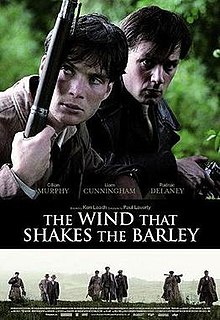 The Wind That Shakes the Barley is a 2006 war drama film directed by Ken Loach, set during the Irish War of Independence (1919–1921) and the Irish Civil War (1922–1923). Written by long-time Loach collaborator Paul Laverty, this drama tells the fictional story of two County Cork brothers, Damien O'Donovan and Teddy O'Donovan, who join the Irish Republican Army to fight for Irish independence from the United Kingdom. 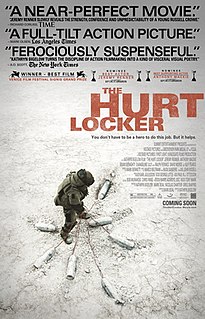 The Hurt Locker is a 2009 American war thriller film directed by Kathryn Bigelow and written by Mark Boal. It stars Jeremy Renner, Anthony Mackie, Brian Geraghty, Christian Camargo, Ralph Fiennes, David Morse, and Guy Pearce. The film follows an Iraq War Explosive Ordnance Disposal team who are targeted by insurgents, and shows their psychological reactions to the stress of combat, which is intolerable to some and addictive to others. Boal drew on his experience during embedded access to write the screenplay.

The 30th Boston Society of Film Critics Awards, honoring the best in filmmaking in 2009, were given on December 13, 2009.

The 8th San Francisco Film Critics Circle Awards, honoring the best in film for 2009, were given on 14 December 2009.

The 5th Austin Film Critics Association Awards, honoring the best in filmmaking for 2009, were announced on December 15, 2009.

The 6th St. Louis Gateway Film Critics Association Awards were announced on the 15 December and given on December 21, 2009.

The 13th Online Film Critics Society Awards, honoring the best in film for 2009, were announced on 5 January 2010.

The Dublin Film Critics' Circle is an Irish film critic association. From 2006, every year, members of the association give out their annual awards.

Kenneth Charles Loach is an English filmmaker. His socially critical directing style and socialist ideals are evident in his film treatment of social issues such as poverty, homelessness, and labour rights. 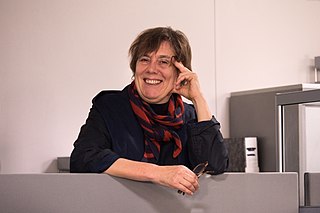 Rebecca O'Brien is a BAFTA-winning film producer, known especially for her work with Ken Loach. O'Brien was born in London, England.