Chris Menges BSC, ASC (born 15 September 1940) is an English cinematographer and film director. He is a member of both the American and British Societies of Cinematographers.

Menges was born in Kington, Herefordshire, the son of the composer and conductor Herbert Menges. [1] He began his career in the 1960s as camera operator for documentaries by Adrian Cowell and for films like Poor Cow by Ken Loach and If.... by Lindsay Anderson. Kes , directed by Ken Loach, was his first film as cinematographer. He was also behind the camera on Stephen Frears' first feature film Gumshoe in 1971.

After several documentaries and feature films like Black Beauty (1971), Bloody Kids (1978), The Game Keeper (1980), Babylon (1980) and Angel (1982) he became notable for more ambitious works for which he was critically acclaimed.

In 1983 he received his first BAFTA nomination for the Bill Forsyth film Local Hero and only a year later won his first Academy Award for the film The Killing Fields about the genocide in Cambodia. He continued his work with helmer Roland Joffe and he won his second Oscar in 1986 with the historical drama The Mission . He also shot a television play titled "Made in Britain", starring Tim Roth in 1983.

In 1988 he made his directorial debut with A World Apart . This film was celebrated at the 1988 Cannes Film Festival and won three major awards. [2]

His second film as director CrissCross with Goldie Hawn received critical acclaim but was a box-office flop. In 1996 he moved back behind the camera to shoot the award winning films The Boxer (directed by Jim Sheridan) and Michael Collins . For the latter he received his third Academy Award nomination in 1997.

Menges also made documentaries. In the early 1970s, he went to Burma with British film maker Adrian Cowell to shoot The Opium Warlords, a film about the drug trade. After the release of the documentary in 1974 the Burmese government was said to have put a price on their heads. He is mentioned in the book Conversations with Cinematographers by David A. Ellis, published by Scarecrow Press. 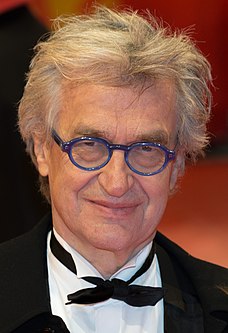 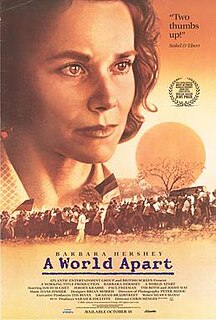 A World Apart is a 1988 anti-apartheid drama film and directed by Chris Menges and starring Barbara Hershey, David Suchet, Jeroen Krabbé, Paul Freeman, Tim Roth, and Jodhi May. Written by Shawn Slovo, it is based on the lives of Slovo's parents, Ruth First and Joe Slovo. The film was a co-production between companies from the UK and Zimbabwe, where it was filmed. It features Hans Zimmer's first non-collaborative film score.

Looks and Smiles is a 1981 British drama film directed by Ken Loach. It is based on the novel of the same name, written by Barry Hines. The film was entered into the 1981 Cannes Film Festival, where Loach won the Young Cinema Award. 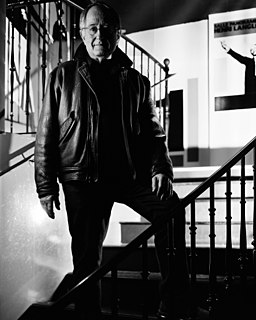 Barry Ackroyd, BSC is an English cinematographer. Ackroyd has frequently worked with directors Ken Loach and Paul Greengrass. He worked on Kathryn Bigelow's 2008 war film The Hurt Locker as well as the critically acclaimed 2013 biographical thriller Captain Phillips, the former earning him a BAFTA Award and an Academy Award nomination for Best Cinematography. In 2014, Ackroyd became the president of the British Society of Cinematographers. 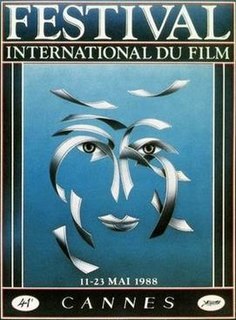 Zoltán Kamondi was a Hungarian film director, actor, screenwriter and producer. He was born in 1960 in Budapest, Hungary.

Route Irish is a 2010 drama-thriller film directed by Ken Loach and written by Paul Laverty. It is set in Liverpool and focuses on the consequences suffered by private security contractors after fighting in the Iraq War. The title comes from the Baghdad Airport Road, known as "Route Irish". The film was a British-French co-production. It was selected for the main competition at the 2010 Cannes Film Festival.

Clio Barnard is a British director of documentary and feature films. She won widespread critical acclaim and multiple awards for her debut, The Arbor, an experimental documentary about Bradford playwright Andrea Dunbar. In 2013 she was hailed as a significant new voice in British cinema for her film The Selfish Giant, which premiered in the Director's Fortnight section of the Cannes film festival. 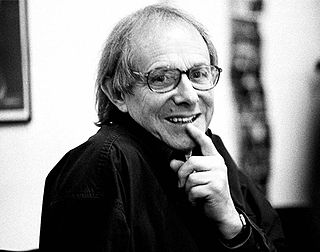 Kenneth Charles Loach is an English filmmaker. His socially critical directing style and socialist ideals are evident in his film treatment of social issues such as poverty, homelessness, and labour rights.

I, Daniel Blake is a 2016 drama film directed by Ken Loach and written by his long-time collaborator Paul Laverty. It stars Dave Johns as Daniel Blake, who is denied Employment and Support Allowance despite his doctor finding him unfit to work. Hayley Squires co-stars as Katie, a struggling single mother whom Daniel befriends.