Basaltic andesite is a volcanic rock containing about 55% silica. It is distinct from basalt and andesite in having a different percentage of silica content. Minerals in basaltic andesite include olivine, augite and plagioclase. [1] Basaltic andesite can be found in volcanoes around the world, including in Central America [2] and the Andes of South America. [3]

The andesite line is the most significant regional geologic distinction in the Pacific Ocean basin. It separates the mafic basaltic volcanic rocks of the Central Pacific Basin from the partially submerged continental areas of more felsic andesitic volcanic rock on its margins. The andesite line parallels the subduction zones and deep oceanic trenches around the Pacific basin. It is the surface expression of melting within and above the plunging subducting slab. It follows the western edge of the islands off California and passes south of the Aleutian Arc, along the eastern edge of the Kamchatka Peninsula, the Kuril Islands, Japan, the Mariana Islands, Yap, Palau, the Solomon Islands, Fiji, Tonga, and New Zealand's North Island. The dissimilarity continues northeastward along the western edge of the Andes mountains of South America to Mexico, returning then to the islands off California. Indonesia, the Philippines, Japan, New Guinea, and New Zealand lie outside the andesite line. 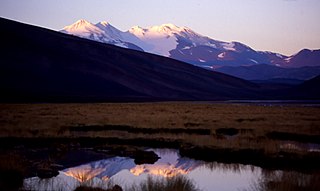 Nevado San Francisco, or Cerro San Francisco, is a stratovolcano on the border between Argentina and Chile, located just southeast of San Francisco Pass. It is considered extinct and is one of the several 6,000 m (19,700 ft) peaks in the area, of which the chief is the Ojos del Salado.

Neuquén Basin is a sedimentary basin covering most of Neuquén Province in Argentina. The basin originated in the Jurassic and developed through alternating continental and marine conditions well into the Tertiary. The basin bounds to the west with the Andean Volcanic Belt, to the southeast with the North Patagonian Massif and to the northeast with the San Rafael Block and to the east with the Sierra Pintada System. The basin covers an area of approximately 120,000 square kilometres (46,000 sq mi). One age of the SALMA classification, the Colloncuran, is defined in the basin, based on the Collón Curá Formation, named after the Collón Curá River, a tributary of the Limay River.

El Barco Lake is a lake in the Bío Bío Region of Chile, near the Callaqui stratovolcano.

Pablo Groeber was a German geologist known for his contributions to the understanding of the geology of Tien Shan in Central Asia and the Andes of Nequén and Mendoza Province in Argentina.

The geology of Peru includes ancient Proterozoic rocks, deformed by the Grenville orogeny, Paleozoic and Mesozoic volcanic and sedimentary rocks and numerous basins and the Andes Mountains formed in the Cenozoic.

The geology of Costa Rica is part of the Panama Microplate, which is slowly moving north relative to the stable Caribbean Plate.