Last updated November 28, 2021
1781 naval battle of the Anglo-French War off the island of Martinique, West Indies

In March 1781, a large French fleet under the command of Grasse left the port of Brest. Most of this fleet was headed for the West Indies. Of the 26 ships of the line, one was sent to North America, and five, under the command of the Suffren, were destined for India. The remaining twenty arrived off to Martinique on 28 April.

On 17 April, Grasse had detached a cutter which arrived at Martinique on 26 to inform Bouillé of his arrival. [3] Before sailing to the lee (western) side of the island, Grasse anchored the fleet and sent someone ashore to gather news and bring orders to Albert de Saint-Hippolyte, commander of a 4-ship division that a British fleet of 17 ships of the line under Samuel Hood had been blockading at Fort Royal for 50 days. [3] The division comprised the 74-gun Victoire, under Saint-Hippolyte, and the 64-gun Caton, under Framond, Réfléchi, under Cillart de Suville, and Solitaire, under Cicé-Champion. [4]

Hood was under orders from the fleet's station commander, Admiral George Brydges Rodney, to maintain the blockade of the port on the lee side, despite his protests that this would put him at a disadvantage should any other fleet arrive. Though disadvantaged by his position and his inferior firepower, the fact that all of his ships had copper bottoms, which required little maintenance compared to the alternative, and that he was not burdened with the responsibility of escorting a convoy both allowed him to focus his efforts on maintaining the blockade.

Grasse ordered his fleet to prepare for action on the morning of 29 April, and sailed for Fort Royal with the convoy ships hugging the coast and the armed ships in battle line. [5] The French spotted Hood's fleet bearing towards them around 0800, but Grasse held the advantageous weather gauge from an East-North-East wind. [5] At about 0920, Hood was joined by the Prince William, a 64-gun ship that had been at St. Lucia.

The two fleets continued to push for advantageous positions, however Hood's leeward position meant he was unable to prevent Grasse from bringing the convoy to the harbour, and Grasse's fleet and the four blockaded ships soon met. Around 1100, Grasse's van began firing at long range, with no effect. Saint-Hippolyte's division then set sail, leaving the harbour of Fort-Royal and making their junction with Grasse. [4]

By 1230 the two fleets were aligned, but Grasse refused to take advantage of the weather gauge to close with Hood, despite Hood's efforts to bring the French to him, as doing so entailed risking his transports. [4] The fleets then exchanged cannonades and broadsides for the next hour; at long range, the damage incurred was modest, although Centaur, Russell and Intrepid required repairs. Centaur had her captain, first officer and 10 others killed, and 26 wounded. [4] [6] The French suffered mostly light damage to their rigging. [4]

From 1400, the French convoy slipped between the coast and Grasse's squadron, safely arriving at Martinique. [7]

Hood finally drew away toward Saint Lucia. On 30, Grasse, having successfully completed his convoy escort, was free to give chase, and he harassed the British for a couple of days, but Hood refused to be brought to action. In the chase, the disparity of sailing performance between the French ships scattered Grasse's squadron, to the point that by 1 May, Grasse had only 11 ships with him and was losing sight of the last ones. [8] He then returned to Fort-Royal, where he arrived on 6 May. [4]

Hood dispatched Russell, which had been holed below the waterline to St. Eustatius for repairs, and to bring news of the action to Admiral Rodney. Hood spent the next day in fruitless attempts to gain the windward and eventually made sail to the North. He met Rodney on 11 May between St. Kitts and Antigua, the latter having left Saint Eustatius on 5 May. Reports of French casualties vary from as few as 74 killed and wounded to more than 250. [2]

British order of battle as provided by Clowes, p. 482. 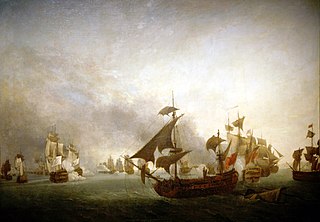 The Zélé was a 74-gun ship of the line of the French Royal Navy. She was funded by a don des vaisseaux donation from the Régisseur général des finances. 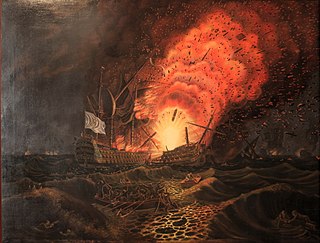 The Citoyen was a 74-gun ship of the line of the French Navy, lead ship of her class to a design by Joseph-Louis Ollivier. She was funded by a don des vaisseaux donation from the Bankers and General Treasurers of the Army.

Sagittaire was a 50-gun ship of the line of the French Navy.

Joseph-Bernard de Chabert-Cogolin was a French Navy officer. He served in the War of American Independence.

Joseph François Auguste Jules d'Albert de Saint-Hippolyte was a French Navy officer. He served in the War of American Independence, earning membership in the Society of the Cincinnati.

Louis Guillaume de Parscau du Plessix was a French Navy officer. He served in the War of American Independence, earning membership in the Society of the Cincinnati. 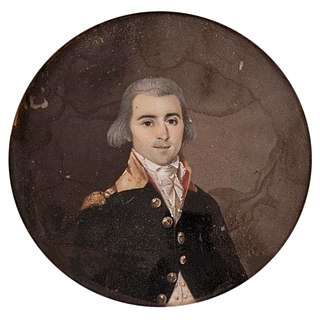 Oiseau was a 32-gun frigate of the French Navy.

Hippolyte-Augustin de Sade de Vaudronne was a French Navy officer. He served during the War of American Independence.

Étienne Marc Antoine Joseph de Grasse-Limermont was a French Navy officer. He took part in the War of American Independence, earning a membership in the Society of Cincinnati. A Royalist, he betrayed France and was an aid to Trogoff when he surrendered Toulon and its fleet to the British. He remained employed by the British until 1814.

Victurnien-Henri-Elzéar de Rochechouart de Mortemart was a French Navy officer. He served in the War of American Independence, and became a member of the Society of the Cincinnati.

HMS Alert was an 18-gun cutter of the Royal Navy. She took part in the War of American Independence, where she was captured by the French Navy and brought into their service. She was part on the squadron under Grasse until a British frigate recaptured her.