Black Waters is a 1929 British/American horror sound film produced by Herbert Wilcox and directed by Marshall Neilan. It was the first British-produced talking picture ever shown in England, but it was actually made in Hollywood since that is where the needed sound equipment was at that time. Wilcox sent Neilan to the U.S. to film the picture there, using a mostly American cast and crew. (Alfred Hitchcock's Blackmail (1929) is often said to be the first British talking picture, but it was actually released after Black Waters.) [2]

Wilcox went on to star American actors in many of his later British films as well, to make them more appealing to British filmgoers, a practice that Hammer Films did away with after 1957. [2]

Black Waters was written by American John Willard, based on his play Fog. Willard was the writer of the successful play The Cat and the Canary (1922), which was filmed several times and ripped off by a number of other filmmakers, and he was trying to repeat his success with this film, only replacing the "old dark house" setting with that of an "old dark houseboat". The cast featured Hollywood actor Noble Johnson (of King Kong fame).

A weird night watchman lures a group of people onto a rundown old yacht at a San Francisco pier at midnight. Once the boat sets sail, the passengers are murdered off one by one, until only two of them (Charles and Eunice) remain, along with a kindly old reverend who turns out to actually be the murderer, a crazy ship's captain named Tiger Larabee who disguises himself as a reverend to pull off a succession of murders.

Herbert Wilcox produced the film after visiting Hollywood to see the development of sound. He rented a soundproofed studio from Charles and Al Christie in Hollywood for five days at £1,000 a day. Wilcox claimed it was the fifth talking picture ever made. He later obtained a license from Western Electric to equip the first sound studio in Europe. [1]

Wilcox struggled to get the film exhibited in England, as only a few British cinemas were equipped to handle sound pictures. [1] Historian Chris Howarth stated "The film was long thought to have received scant attention upon its initial release, though some modern film critics who have studied the original reviews suggest that it might have been more inventive than originally assumed....". [2]

The following is an overview of the events of 1899 in film, including a list of films released and notable births.

The Last Performance is a 1927 American horror film directed by Paul Fejos and starring Conrad Veidt and Mary Philbin. It was the last American silent film featuring Veidt before he returned to Germany. The film's working title was Erik the Great. Two versions were made - a silent version and Movietone version complete with music, talking sequences, and sound effects.

Genuine is a 1920 German silent horror film directed by Robert Wiene. It was also released as Genuine: A Tale of a Vampire. Director Wiene created Genuine as a follow-up to his massively successful 1919 film The Cabinet of Dr. Caligari, using the same writer and cinematographer who had worked on the earlier film. Production designer Cesar Klein even returned to contribute his bizarre Caligari-like imagery to the film.

The Thirteenth Chair is a 1929 American pre-Code mystery film directed by Tod Browning. The picture is based on a 1916 play of the same name by Bayard Veiller. It stars Conrad Nagel, Leila Hyams and Margaret Wycherly. The supporting cast features Bela Lugosi, whom Browning would direct as Dracula two years later.

She is a 1925 British-German fantasy adventure film made by Reciprocity Films, co-directed by Leander de Cordova and G. B. Samuelson, and starring Betty Blythe, Carlyle Blackwell and Mary Odette. It was filmed in Berlin by a British film company as a co-production, and based on H. Rider Haggard's 1887 novel of the same name. According to the opening credits, the intertitles were specially written for the film by Haggard himself; he died in 1925, the year the film was made, and never got to see the finished film. The film still exists in its complete form today.

Maria Marten is a 1928 British silent drama film directed by Walter West starring Trilby Clark, Warwick Ward and Dora Barton. It is based on the real story of the Red Barn Murder in the 1820s, and is one of five film versions of the events. The film shifted the action to fifty years earlier to the height of the Georgian era. This was the last of the silent film adaptations of the Maria Marten story, and its success paved the way for the much better 1935 sound film remake starring Tod Slaughter. A 35mm print of the 1928 silent film exists in the British Film Institute's archives.

Orphan of Lowood is a 1926 German silent drama film directed by Curtis Bernhardt and starring Evelyn Holt, Olaf Fønss and Dina Diercks. It is based on the 1847 British novel Jane Eyre by Charlotte Brontë. It was shot at the Terra Studios in Marienfelde. Jane Eyre was remade as a sound film in 1934. Director Bernhardt, a Jew wanted by the Gestapo, escaped from Nazi Germany and immigrated to Hollywood where he directed films for MGM, RKO, Columbia Pictures and Warner Brothers.

In Old Kentucky is a 1919 American silent drama film produced by Louis B. Mayer and distributed through First National Attractions, later First National Pictures. The picture was directed by Marshall Neilan and starred Anita Stewart. It was based on the play In Old Kentucky by Charles T. Dazey.

The Monster of Frankenstein is a 1920 Italian silent horror film, produced by Luciano Albertini, directed by Eugenio Testa, starring Luciano Albertini, Aldo Mezzanotte and Umberto Guarracino, and is an adaptation of Mary Shelley's 1818 novel Frankenstein; or, The Modern Prometheus. It was one of a very few Italian horror films produced in the silent era, since after Benito Mussolini seized control of the country, horror films were strictly forbidden. The Mary Shelley novel had been filmed twice before during the silent era, as Thomas Edison's Frankenstein (1910) and as Life Without Soul (1915). 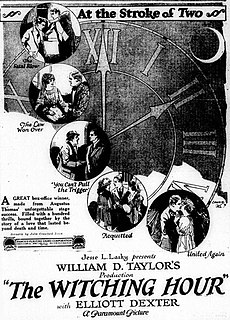 The Monkey's Paw is a 1923 British silent horror film directed by Manning Haynes and starring Moore Marriott, Marie Ault and Charles Ashton. It is an adaptation of W. W. Jacobs's 1902 short story "The Monkey's Paw". The short story was made into a 1907 one-act play by Louis N. Parker, elements of which were also incorporated into this 1923 British film by screenwriter Lydia Hayward.