Paddy the Next Best Thing is a 1923 British silent romance film directed by Graham Cutts and starring Mae Marsh, Darby Foster and Lilian Douglas. It was based on the 1912 novel of the same title by Gertrude Page and a 1920 stage adaptation, which was later adapted into a 1933 American film. It was made at the Gainsborough Studios in Islington. [2] American star Mae Marsh had been brought over from Hollywood to star in the company's previous film Flames of Passion and stayed on to make this film.

Sadie Thompson is a 1928 American silent drama film that tells the story of a "fallen woman" who comes to Pago Pago on the island of Tutuila to start a new life, but encounters a zealous missionary who wants to force her back to her former life in San Francisco. The film stars Gloria Swanson, Lionel Barrymore, and Raoul Walsh, and is one of Swanson's most successful films. 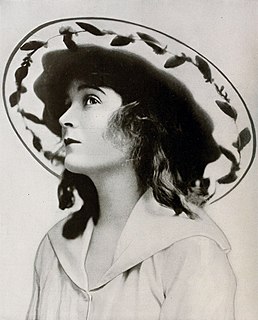 Son of Fury: The Story of Benjamin Blake is a 1942 American south seas adventure film directed by John Cromwell and starring Tyrone Power and Gene Tierney. The film was adapted from Edison Marshall's 1941 historical novel Benjamin Blake. It is notable as the last film Frances Farmer appeared in before her legal problems and eventual commitment to psychiatric hospitals until 1950.

Marie Jeanne Wright was a British stage and film actress. She was born in Dover and died in Hendon.

Polly of the Circus is a 1917 American silent drama film notable as the first film produced by Samuel Goldwyn after founding his studio Goldwyn Pictures. This film starred Mae Marsh, usually an actress for D.W. Griffith, but now under contract to Goldwyn for a series of films. The film was based on the 1907 Broadway play Polly of the Circus by Margaret Mayo which starred Mabel Taliaferro. Presumably when MGM remade Polly of the Circus in 1932 with Marion Davies, they still owned the screen rights inherited from the 1924 merger by Marcus Loew of the Metro, Goldwyn, and Louis B. Mayer studios.

Lilian Douglas was a British stage and film actress. She starred in fourteen films during the silent era.

A Sporting Double is a 1922 British silent drama film directed by Arthur Rooke and starring John Stuart, Lilian Douglas and Douglas Munro. The film is set in the horse racing world. It was re-released in 1926 by Butcher's Film Service. 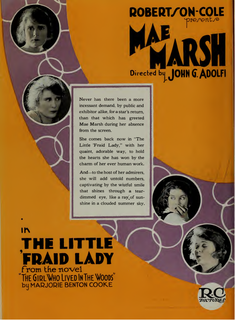 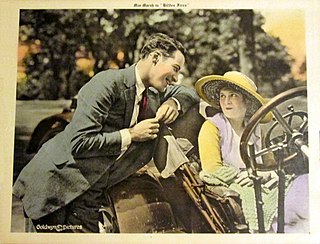 Hidden Fires is a lost 1918 silent film drama directed by George Irving and starring Mae Marsh and Rod La Rocque. It was produced and distributed by Goldwyn Pictures.

Perch of the Devil is a 1927 American silent drama film directed by King Baggot and starring Mae Busch, Pat O'Malley and Jane Winton. It is based on the 1914 novel of the same title by Gertrude Atherton.

The Cinderella Man is a 1917 American silent comedy film directed by George Loane Tucker and starring Mae Marsh, Tom Moore and Alec B. Francis. The film's sets were designed by the art director Hugo Ballin.