Prior to the revision of the Anglican Church of Canada's (ACC) Book of Common Prayer (BCP) in 1962, the national church followed the liturgical calendar of the 1918 Canadian Book of Common Prayer. Throughout most of the twentieth century, the situation in Canada resembled that which pertained in much of the Anglican Communion: There was uncertainty as to whether post-Reformation figures (with the exception of the martyred Charles I) could or should be commemorated. In the words of the calendar's introduction, "New names have been added from the ancient calendars, and also from the history of the Anglican Communion, without thereby enrolling or commending such persons as saints of the Church." The 1962 revision added twenty-six post-Reformation individuals, as well as commemorations of the first General Synod and of "The Founders, Benefactors, and Missionaries of the Church in Canada." Of the calendar days, twenty-eight were highlighted as "red-letter days" — that is, days of required observation.

With the publication of the Book of Alternative Services (BAS) in 1985, a revised and expanded calendar was introduced. This was supplemented, in 1994, with the publication of For All The Saints; a book of propers, short biographies and descriptions of the commemorations, and readings by or about the individuals or events commemorated (there were also some very minor changes to the 1985 calendar). As the BAS has largely supplanted the BCP for most Canadian Anglicans, so too has its calendar. Nonetheless, the BCP calendar is still in use and individuals and parishes can legitimately choose to observe it.

The chief difference between the 1962 and 1985 calendars is the elimination of observations for several European figures, in order to include individuals of interest to the Canadian Church, and to the worldwide Anglican Communion. Similar to the Calendar of saints of the Church of England, the Patriarchs of Old are omitted in both the Book of Common Prayer and the newer Book of Alternative Services, for the Anglican Church of Canada.

In the ACC, the calendar is officially referred to as the Canadian Calendar of Holy Persons.

The revised calendar follows the Anglican custom of delineating between days of required observance ("red-letter days") and days of optional observance ("black letter days"). The way the calendar breaks these down is as follows:

Feasts of Our Lord

In addition, some parishes observe other days commemorated elsewhere in the Christian tradition, such as Corpus Christi, Lammas-day, etc. Some individual parishes have their own calendars, which include the names of individuals significant to the parish or its identity, with which they supplement the national calendar.

The following is the calendar of the Anglican Church of Canada according to the Book of Alternative Services. On those days in which there are two commemorations, a pattern of alternating the observance by year is recommended.

1PF: Principal Feast; HD: Holy Day; Mem: Memorial; Com: Commemoration2Added to the calendar by resolution of the Council of General Synod, May, 2005.

The calendar of the Prayer Book stipulates: "When two lesser commemorations fall on the same day and it is desired to remember both, it is recommended that one of them be transferred to the nearest day before or after for which no special provision has been made."

Differences between the BCP and BAS 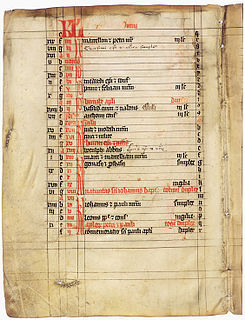 The veneration of saints in the Episcopal Church is a continuation of an ancient tradition from the early Church which honors important and influential people of the Christian faith. The usage of the term "saint" is similar to Roman Catholic and Orthodox traditions. Episcopalians believe in the communion of saints in prayer and as such the Episcopal liturgical calendar accommodates feasts for saints.

Lesser Festivals are a type of observance in the Anglican Communion, including the Church of England, considered to be less significant than a Principal Feast, Principal Holy Day, or Festival, but more significant than a Commemoration. Whereas Principal Feasts must be celebrated, it is not obligatory to observe Lesser Festivals. They are always attached to a calendar date, and are not observed if they fall on a Sunday, in Holy Week, or in Easter Week. In Common Worship each Lesser Festival is provided with a collect and an indication of liturgical colour.

In the Calendar of the Scottish Episcopal Church, each holy and saint’s day listed has been assigned a number which indicates its category. It is intended that feasts in categories 1 - 4 should be kept by the whole church. Days in categories 5 and 6 may be kept according to diocesan or local discretion. Commemorations not included in this Calendar may be observed with the approval of the bishop.