A few of the recreational forms of canoeing are canoe camping and canoe racing. Other forms include a wide range of canoeing on lakes, rivers, oceans, ponds and streams.

Canoeing is an ancient mode of transportation. Modern recreational canoeing was established in the late 19th century. In 1924, canoeing associations from Austria, Germany, Denmark and Sweden founded the Internationalen Representation for Kanusport, forerunner of the International Canoe Federation. [1] Canoeing became part of the Olympic Games in the summer of 1936. [2] [3] The main form of competitive sport was canoe sprint using a sprint canoe. Others include canoe polo, whitewater canoeing, canoe marathon, ICF canoe marathon, and playboating.

Most present-day canoeing is done as or as a part of a sport or recreational activity. In some parts of Europe, canoeing refers to both canoeing and kayaking, with a canoe being called an Open canoe. A few of the recreational forms of canoeing are canoe camping and canoe racing such as canoe sprint and canoe marathons. Other forms include a wide range of canoeing on lakes, rivers, oceans, ponds and streams.

The summer Olympics include canoeing competitions. Canoe slalom (previously known as whitewater slalom) is a competitive sport with the aim to navigate a decked canoe or kayak through a course of hanging downstream or upstream gates on river rapids in the fastest time possible. It is one of the two kayak and canoeing disciplines at the Summer Olympics, and is referred to by the International Olympic Committee (IOC) as Canoe/Kayak Slalom. The other Olympic canoeing discipline is canoe sprint.

In his lifetime, according to the Guinness Book of World Records, Verlen Kruger paddled the most miles (over 100,000 miles) of anyone in the sport. [4] 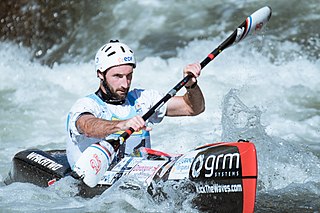 The Scottish Canoe Association is the national governing body for canoeing, kayaking and other paddlesport in Scotland. 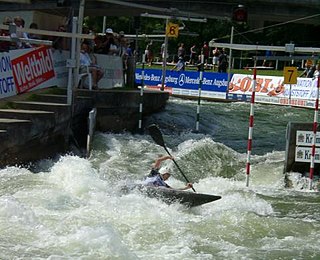 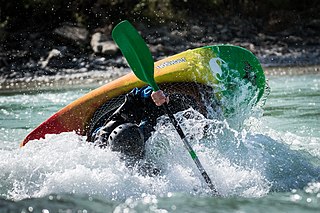 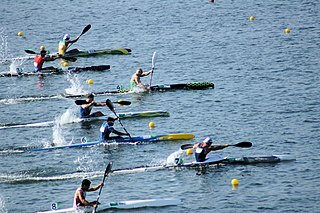 Canoe sprint is a water sport in which athletes race canoes or kayaks on calm water.

Jon Phillip Lugbill is a whitewater canoe slalom racer. During the 1980s, he participated in international racing in Men's Individual C1. He is the only slalom racer to ever appear on the Wheaties box. 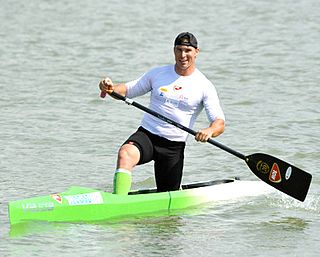 Richard Munro Fox is a British slalom canoeist who competed for Great Britain from the late 1970s to the mid-1990s. He won eleven medals at the ICF Canoe Slalom World Championships with ten golds and a bronze. Fox also won the overall World Cup title three times and the Euro Cup four times.

Canoe Wales is the national governing body for paddlesport in Wales. It covers all branches of the sport from recreational canoeing, kayaking, stand up paddleboarding and rafting to whitewater racing, slalom racing and wildwater racing; flatwater sprint racing and marathon racing; canoe sailing; canoe polo; surf kayaking and canoeing; and extreme racing. The organisation has over 2,700 members including individual paddlers as well as affiliated club members. Full adult members of Canoe Wales are also by default Welsh members of British Canoeing.

Canoe Kayak Canada is the governing body of competitive canoeing and kayaking disciplines in Canada. The three specific disciplines represented are flatwater, whitewater and marathon. Canoe Kayak Canada officially replaced the name "Canadian Canoe Association" in 2005, although the former title is still used by the organization. The name change came about from a desire to include the kayaking discipline in the organization's name. 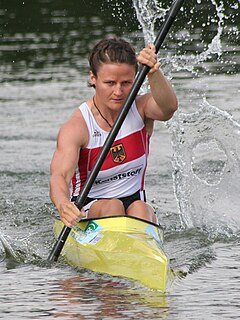 Sprint kayak is a sport held on calm water. The paddler is seated, facing forward, and uses a double-bladed paddle pulling the blade through the water on alternate sides to propel the boat forward. Kayak sprint has been in every summer Olympics since it debuted at the 1936 Summer Olympics. Racing is governed by the International Canoe Federation. 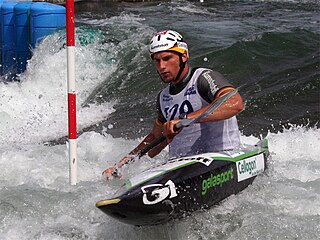 Alexander Grimm is a German slalom canoeist who has competed at the international level since 2002. 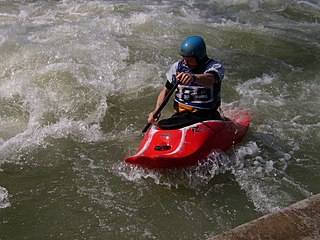 Whitewater canoeing is the sport of paddling a canoe on a moving body of water, typically a whitewater river. Whitewater canoeing can range from simple, carefree gently moving water, to demanding, dangerous whitewater. River rapids are graded like ski runs according to the difficulty, danger or severity of the rapid. Whitewater grades range from I or 1 to VI or 6. Grade/Class I can be described as slightly moving water with ripples. Grade/Class VI can be described as severe or almost unrunnable whitewater, such as Niagara Falls. 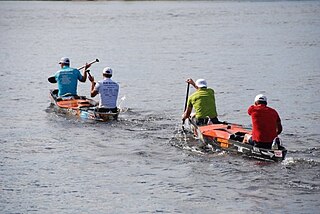 Canoe marathon is a paddling sport in which athletes paddle a kayak or canoe over a long distance to the finish line. The International Canoe Federation states the standard distances are at least 10 kilometres (6.2 mi) without an upper limit, while short distance races are between 3.4 kilometres (2.1 mi), and 10 kilometres (6.2 mi). Many events are raced down sections of river, including currents or portages around obstacles. Some events attract thousands of competitors and are staged over several days.

Viking Kayak Club is an open, community-based, multi-disciplinary club and is now one of the foremost canoe and kayak clubs in the UK. The club offers a broad range of paddling opportunities from easy recreational paddling to competition in canoe slalom, canoe racing and canoe polo and is active in encouraging beginners into the sport. 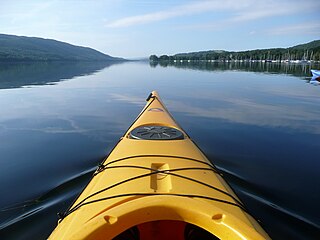 Wikivoyage has a travel guide for Canoeing .
This page is based on this Wikipedia article
Text is available under the CC BY-SA 4.0 license; additional terms may apply.
Images, videos and audio are available under their respective licenses.