A construction worker is a worker employed in manual labour of the physical construction of the built environment and its infrastructure. [1]

The term is a broad, generic one and most such workers are primarily described by the specific level and type of work they perform. For example, laborers carry out a wide range of practical tasks to help tradespersons on construction sites. They clean the construction site on a regular basis using tools such as rakes, shovels, and wheelbarrows to remove rubble, scraps of metal, and wood. They might also need to sweep out certain areas and put building supplies in order.

Construction workers may colloquially be referred to as "hard hat workers" or "hard hats", [2] as they often wear hard hats for safety.

Construction safety is intended to ensure a safe environment for workers, who are required to be educated on safety at each site. [3]

Examples of poor pay and working conditions for migrant workers

In 2008, a Human Rights Watch report described unsafe and unfair working conditions in China and a failure on the part of the government to enforce labor standards in the construction industry. [4] The International Labour Organization (ILO) estimated that, at the end of 2006, 90% of the 40 million construction workers in China were migrant workers. Many turned to work after their farming communities collapsed into poverty. [4]

In the United States, illegal immigrant labor is prevalent in the industry. Due to workers' questionable legal status, some employers commit crimes such as wage theft and violation of workplace standards, running little risk of consequences. [5] Similar abuse occurred in Qatar during preparations for the 2022 FIFA World Cup where workers mostly from poor countries in the Indian Sub-continent work in desert conditions for as little as €6.20 a day. [6] 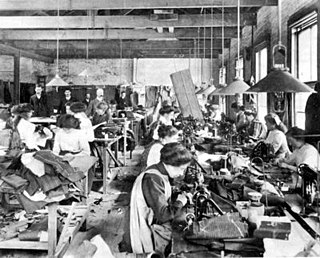 A sweatshop is a crowded workplace with very poor, socially unacceptable or illegal working conditions. The work may be difficult, dangerous, climatically challenging or underpaid. Workers in sweatshops may work long hours with low pay, regardless of laws mandating overtime pay or a minimum wage; child labor laws may also be violated. The Fair Labor Association's "2006 Annual Public Report" inspected factories for FLA compliance in 18 countries including Bangladesh, El Salvador, Colombia, Guatemala, Malaysia, Thailand, Tunisia, Turkey, China, India, Vietnam, Honduras, Indonesia, Brazil, Mexico, and the US. The U.S. Department of Labor's "2015 Findings on the Worst Forms of Child Labor" found that "18 countries did not meet the International Labour Organization's recommendation for an adequate number of inspectors." 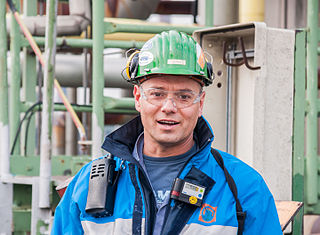 A hard hat is a type of helmet predominantly used in workplace environments such as industrial or construction sites to protect the head from injury due to falling objects, impact with other objects, debris, rain, and electric shock. Suspension bands inside the helmet spread the helmet's weight and the force of any impact over the top of the head. A suspension also provides space of approximately 30 mm between the helmet's shell and the wearer's head, so that if an object strikes the shell, the impact is less likely to be transmitted directly to the skull. Some helmet shells have a mid-line reinforcement ridge to improve impact resistance. The rock climbing helmet fulfills a very similar role in a different context and has a very similar design. 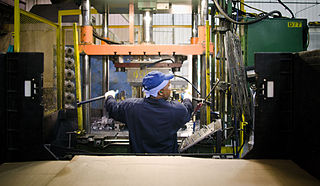 A laborer is a person who works in manual labor types, especially in the construction and factory industries' workforce. Laborers are in a class of wage-earners in which their only possession of significant material value is their labor, this is the proletariat. Industries employing laborers include building things such as roads, buildings, bridges, tunnels, and railway tracks. Laborers work with blasting tools, hand tools, power tools, air tools, and small heavy equipment, and act as assistants to other trades as well such as operators or cement masons. The 1st century BC engineer Vitruvius writes that a good crew of laborers is just as valuable as any other aspect of construction. Other than the addition of pneumatics, laborer practices have changed little. With the introduction of field technologies, the laborers have been quick to adapt to the use of this technology as being laborers' work. 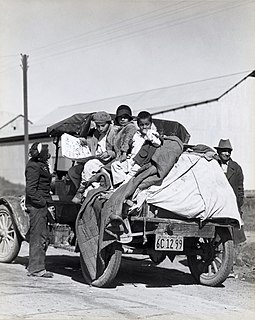 A migrant worker is a person who either migrates within their home country or outside it to pursue work. Migrant workers usually do not have the intention to stay permanently in the country or region in which they work.

Social dumping is a practice of employers to use cheaper labour than is usually available at their site of production or sale. In the latter case, migrant workers are employed; in the former, production is moved to a low-wage country or area. The company will thus save money and potentially increase its profit. Systemic criticism suggests that as a result, governments are tempted to enter a so-called social policy regime competition by reducing their labour and social standards to ease labour costs on enterprises and to retain business activity within their jurisdiction.

Migrant domestic workers are, according to the International Labour Organization’s Convention No. 189 and the International Organization for Migration, any persons "moving to another country or region to better their material or social conditions and improve the prospect for themselves or their family," engaged in a work relationship performing "in or for a household or households." Domestic work itself can cover a "wide range of tasks and services that vary from country to country and that can be different depending on the age, gender, ethnic background and migration status of the workers concerned." These particular workers have been identified by some academics as situated within "the rapid growth of paid domestic labor, the feminization of transnational migration, and the development of new public spheres." Prominent discussions on the topic include the status of these workers, reasons behind the pursue in this labour, recruitment and employment practices in the field, and various measures being undertaken to change the conditions of domestic work among migrants.

The Fair Labor Association (FLA) is a non-profit collaborative effort of universities, civil society organizations, and businesses. It describes its mission as promoting adherence to international and national labor laws.

China Labor Watch (CLW) is a New York City, New York-based non-government organization founded by labor activist Li Qiang in October 2000. Its mission is the defense of workers' rights in China. Through research, advocacy and legal assistance, CLW seeks to help China's workers become more informed of their rights and more empowered to realize those rights within their communities.

Internal migration in the People's Republic of China is one of the most extensive in the world according to the International Labour Organization. This is because migrants in China are commonly members of a floating population, which refers primarily to migrants in China without local household registration status through the Chinese Hukou system. In general, rural-urban migrant workers are most excluded from local educational resources, citywide social welfare programs and many jobs because of their lack of hukou status. Migrant workers are not necessarily rural workers; they can simply be people living in urban areas with rural household registration.

Contemporary slavery, also known as modern slavery or neo-slavery, refers to institutional slavery that continues to occur in present-day society. Estimates of the number of slaves today range from around 38 million to 46 million, depending on the method used to form the estimate and the definition of slavery being used. The estimated number of slaves is debated, as there is no universally agreed definition of modern slavery; those in slavery are often difficult to identify, and adequate statistics are often not available. The International Labour Organization estimates that, by their definitions, over 40 million people are in some form of slavery today. 24.9 million people are in forced labor, of whom 16 million people are exploited in the private sector such as domestic work, construction or agriculture; 4.8 million persons in forced sexual exploitation, and 4 million persons in forced labor imposed by state authorities. 15.4 million people are in forced marriage.

"Thailand is a source, destination, and transit country for men, women, and children subjected to forced labour and sex trafficking."Thailand's relative prosperity attracts migrants from neighboring countries who flee conditions of poverty and, in the case of Burma, military repression. Significant illegal migration to Thailand presents traffickers with opportunities to coerce or defraud undocumented migrants into involuntary servitude or sexual exploitation. U.S. State Department's Office to Monitor and Combat Trafficking in Persons placed the country in "Tier 2" in 2019. 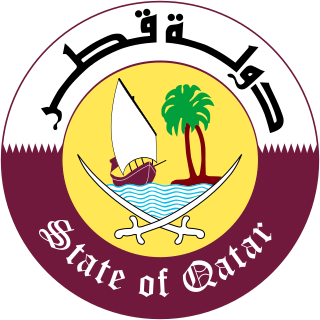 The state of human rights in Qatar is a concern for several non-governmental organisations, such as Human Rights Watch, which reported in 2012 that hundreds of thousands of mostly South Asian migrant workers in construction in Qatar risk serious exploitation and abuse, sometimes amounting to forced labour. Awareness grew internationally after Qatar's selection to stage the 2022 World Cup, and some reforms have since taken place, including two sweeping changes in 2020.

A physical hazard is an agent, factor or circumstance that can cause harm with contact. They can be classified as type of occupational hazard or environmental hazard. Physical hazards include ergonomic hazards, radiation, heat and cold stress, vibration hazards, and noise hazards. Engineering controls are often used to mitigate physical hazards. 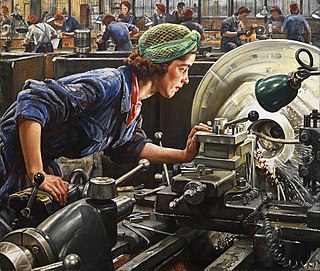 Human trafficking in Southeast Asia has long been a problem for the area and is still prevalent today. It has been observed that as economies continue to grow, the demand for labor is at an all-time high in the industrial sector and the sex tourism sector. A mix of impoverished individuals and the desire for more wealth creates an environment for human traffickers to benefit in the Southeast Asia region. Many nations within the region have taken preventive measures to end human trafficking within their borders and punish traffickers operating there.

The National Labor Relations Board (NLRB) regulates union organization in the American meat packing industry. The Occupational Safety and Health Administration regulates the safety and health conditions applicable to workers in the American meat packing industry. According to scholars of the American meat packing industry, despite federal regulation through OSHA and industry oversight, workers in meat production plants have little agency and inadequate protections. Workers in the industry perform difficult jobs in dangerous conditions, and are at significant risk for physical and psychological harm. In addition to high rates of injury, workers are at risk of losing their jobs when they are injured or for attempting to organize and bargain collectively. Several of studies of the industry have found immigrant workers - "an increasing percentage of the workforce in the industry" - especially at risk of not having their labor rights sufficiently protected.

Migrant workers in the Gulf Cooperation Council region involves the prevalence of migrant workers in the Kingdom of Bahrain, the State of Kuwait, the Sultanate of Oman, the State of Qatar, the Kingdom of Saudi Arabia and the United Arab Emirates (UAE). Together, these six countries form the Gulf Cooperation Council (GCC), established in 1981. The GCC cooperates on issues related to economy and politics, and the subject of migrant workers constitutes a substantial part of the council's collaboration. All of the GCC countries are dependent on migrant labor to bolster and stimulate economic growth and development, as the GCC countries possess an abundance of capital while the domestic labor capacity is low. Although migrant workers in the Persian Gulf region amount to no more than 10% of all migrants worldwide, they constitute a significant part of the populations of their host countries.