The East Bay Green Corridor is a regional partnership working toward promoting the San Francisco East Bay as a global center of the emerging green economy. The members are thirteen East Bay cities, schools and research institutions. [1] The partnership's stated goals are to attract and retain green businesses, promote research and technology transfer, strengthen green workforce development programs, and coordinate a regional effort to secure federal funding. [2] West Berkeley activists have criticized the City of Berkeley's planned implementation of the corridor, over concerns that zoning regulations may be relaxed for the benefit of developers and large corporations, and could negatively impact the city's light manufacturing district. [3] [4]

The East Bay Green Corridor was announced on Dec. 3, 2007 at a new solar-energy facility in Richmond, California. [5] The partnership had six founding members: [6]

At a press conference to announce its creation, Berkeley Mayor Tom Bates predicted that "the Silicon Valley of the green economy is going to be here in the East Bay." [5] The partners all pledge to hold an annual green economic summit, set quarterly meetings of the directors of economic development, workforce development and technology transfer offices, and to coordinate a major new regional green job training and placement effort. [6]

In June 2009, the East Bay Green Corridor held its second annual summit at the Oakland Museum of California. Seven new members were announced: [7]

At the summit, the partnership announced that it had secured its first direct funding, a federal earmark worth $147,000 for job training. [8]

In August 2009, East Bay Green Corridor hired its first full-time director, Carla Din, who previously served as a director at the Apollo Alliance, a green energy nonprofit in San Francisco. Members of the partnership contribute $10,000 a year for staff salaries and marketing. The project is fiscally sponsored by the East Bay Economic Development Alliance, which also provides office space from its Oakland headquarters. [1] [9]

Plans for implementing the East Bay Green Corridor have led to a significant zoning controversy in Berkeley, particularly in the light industrial area known as West Berkeley. To entice green energy start-ups to the area, Bates and city planning staff have proposed changing existing zoning regulations and instituting a revised master use permit process. The effect of these proposed changes, according to media reports, would be to double the allowed height of new buildings and allow office complexes to be built.

A group of community activists known as West Berkeley Artisans and Industrial Companies (WeBAIC) have strongly opposed the zoning changes, arguing that they will hurt the economic vitality and unique character of the neighborhood. [3] [4] [10] Some of the coalition's members have also argued that allowing developers to erect expensive condominiums and office buildings will price existing businesses out of the neighborhood and force their relocation. [3] 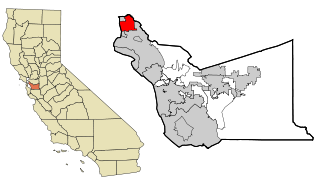 Berkeley is a city on the eastern shore of San Francisco Bay in northern Alameda County, California, United States. It is named after the 18th-century Irish bishop and philosopher George Berkeley. It borders the cities of Oakland and Emeryville to the south and the city of Albany and the unincorporated community of Kensington to the north. Its eastern border with Contra Costa County generally follows the ridge of the Berkeley Hills. The 2020 census recorded a population of 124,321. 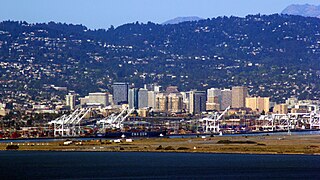 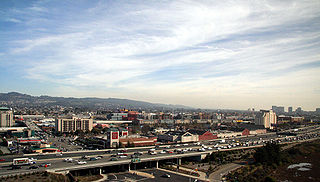 Emeryville is a city located in northwest Alameda County, California, in the United States. It lies in a corridor between the cities of Berkeley and Oakland, with a border on the shore of San Francisco Bay. The resident population was 12,905 as of 2020. Its proximity to San Francisco, the Bay Bridge, the University of California, Berkeley, and Silicon Valley has been a catalyst for recent economic growth.

Thomas H. Bates was the 21st mayor of Berkeley, California, and a member of the California State Assembly. Bates is married to Loni Hancock, another former mayor of Berkeley and State Assembly member who served in the California State Senate. He is a graduate of the University of California, Berkeley and was a member of the Golden Bears' 1959 Rose Bowl team. Bates was a captain in the United States Army Reserves after graduating from college and served in Germany. He worked in real estate before serving on the Alameda County Board of Supervisors and in the state legislature.

Ronald Vernie Dellums was an American politician who served as Mayor of Oakland from 2007 to 2011. He had previously served thirteen terms as a Member of the U.S. House of Representatives from California's 9th congressional district, in office from 1971 to 1998, after which he worked as a lobbyist in Washington, D.C.

The Port of Oakland is a major container ship facility located in Oakland, California, in the San Francisco Bay. It was the first major port on the Pacific Coast of the United States to build terminals for container ships. As of 2011 it was the fifth busiest container port in the United States, behind Long Beach, Los Angeles, Newark, and Savannah. Development of an intermodal container handling system in 2002 after over a decade of planning and construction positions the Port of Oakland for further expansion of the West Coast freight market share. In 2019 it ranked 8th in the United States in the category of containers.

The Richmond Progressive Alliance (RPA) is a community/political group in Richmond, western Contra Costa County, California, United States. Its mission is to unite the left regardless of political party and was founded by Gayle McLaughlin and Marilyn Langlois. 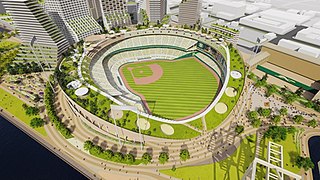 Howard Terminal Ballpark is a proposed baseball stadium to be built in the Jack London Square neighborhood of Oakland, California. It would serve as the new home stadium of the Oakland Athletics of Major League Baseball, and replace the Oakland Coliseum as their current home. After several unsuccessful attempts to build a new stadium, both in Oakland and elsewhere, the Athletics landed on their current plan, which is to build a 34,000-seat stadium at Howard Terminal. The site is currently a parcel of land owned by the Port of Oakland. After securing the site, the Athletics plan to have the stadium built and operational after the team's lease expires at the Oakland Coliseum in 2024.

The Lakeside Apartments District neighborhood, also known as The Gold Coast, and simply as The Lakeside, is one of Oakland's historic residential neighborhoods between the Downtown district and Lake Merritt. In the context of a Cultural Heritage Survey, the City of Oakland officially named most of the blocks of the neighborhood "The Lakeside Apartments District," and designated it as a local historic district with architecturally significant historic places, and Areas of Primary Importance (APIs). The greater neighborhood includes the interior blocks officially designated as a local historic district and the 'Gold Coast' peripheral areas along Lakeside Drive, 20th Street, and the west edge of Lake Merritt, areas closer to 14th Street and the Civic Center district, and blocks adjacent to downtown along Harrison Street. 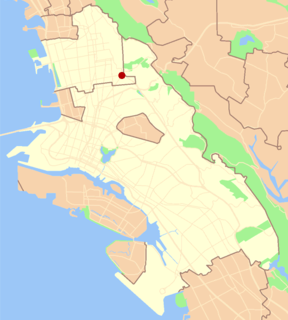 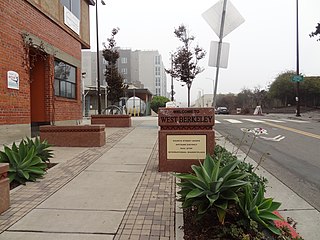 This is a list of the National Register of Historic Places listings in Alameda County, California. 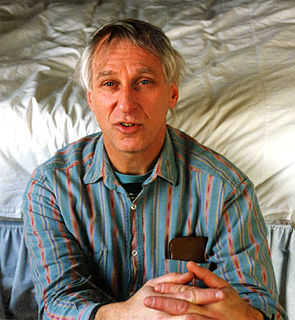 The history of Oakland, a city in the county of Alameda, California, can be traced back to the founding of a settlement by Horace Carpentier, Edson Adams, and Andrew Moon in the 19th century. The area now known as Oakland had seen human occupation for thousands of years, but significant growth in the settlements that are now incorporated into the city did not occur until the Industrial Revolution. Oakland was first incorporated as a town in 1852.

Ecocity Builders is a 501(c) non profit located in Oakland, California, that provides advocacy, consulting, and education in sustainable city planning with a focus on access by proximity and pedestrian-oriented development. Ecocity Builders also implements urban design projects utilizing a large network of alliances with city governments, businesses and NGOs. Ecocity Builders' approach is based the work of founder Richard Register, an American artist, peace activist and urban theorist.