A G-string is a type of thong, a narrow piece of fabric, leather, or satin that covers or holds the genitals, passes between the buttocks, and is attached to a waistband around the hips. A G-string can be worn both by men and by women. It may also be worn in swimwear, where it may serve as a bikini bottom, but may be worn alone as a monokini or topless swimsuit. G-strings may also be worn by exotic or go-go dancers. As underwear, a G-string may be worn in preference to panties to avoid creation of a visible panty line, or to briefs in order to enhance sex-appeal.

The two terms G-string and thong are sometimes used interchangeably; however, technically they refer to different pieces of clothing.

Since the 19th century, the term geestring referred to the string which held the loincloth of Native Americans [1] and later referred to the narrow loincloth itself. William Safire in his Ode on a G-String quoted the usage of the word "G-string" for loincloth by Harper's Magazine 15 years after John Hanson Beadle's 1877 usage and suggested that the magazine confused the word with the musical term G-string (i.e., the string for the G note). This is apocryphal, as the narrowest string on a violin is the E string. [2]

Safire also mentions the opinion of linguist Robert Hendrickson that G (or gee) stands for groin, which was a taboo word at the time. [3]

Cecil Adams, author of the blog The Straight Dope, has proposed an origin from "girdle-string", which is attested as early as 1846. [4]

The Oxford English Dictionary reports that the G-string was originally a narrow strip of fabric worn by American Indian women. [2] The G-string first appeared in costumes worn by showgirls in the United States in Earl Carroll's productions during the 1920s, a period known as the Jazz Age or the Roaring Twenties. Linguist Robert Hendrickson believes that the G stands for groin. [2] During the Depression, a "G-string" was known as "the gadget", a double-entendre that referred to a handyman's "contrivance", an all-purpose word for the thing that might "fix" things. [2] During the 1930s, the "Chicago G-string" gained prominence when worn by performers like Margie Hart. The Chicago area was the home of some of the largest manufacturers of G-strings and it also became the center of the burlesque shows in the United States. [2]

The term G-string started to appear in Variety magazine during the 1930s. In New York City, G-strings were worn by female dancers at risqué Broadway theatre shows during the Jazz Age. During the 1930s and 1940s, the New York striptease shows in which G-strings were worn were described as "strong". In shows referred to as "weak" or "sweet" the stripper wore "net panties" instead. "Strong" shows usually took place only when the police were not present, and they became rarer after 1936 when Fiorello H. La Guardia, the Mayor of New York City, organised a series of police raids on burlesque shows. [5]

The American burlesque entertainer Gypsy Rose Lee is popularly associated with the G-string. In 1941 she published a best-selling detective novel called The G-String Murders [6] in which strippers are found strangled with their own G-strings. Her striptease performances often included the wearing of a G-string; in a memoir written by her son Erik Lee Preminger she is described as glueing on a black lace G-string with spirit gum in preparation for a performance. [7]

In the Tarzan novels of Edgar Rice Burroughs, Tarzan is described as wearing a G-string made of doe or leopard skin. [8] In the Tarzan films he always wore a more modest loin cloth. 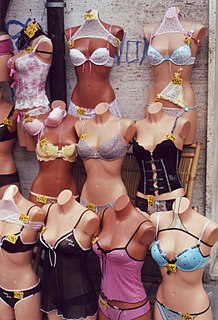 Lingerie is a category of women's clothing including at least undergarments, sleepwear and lightweight robes. The specific choice of the word often is motivated by an intention to imply the garments are alluring, fashionable or both. 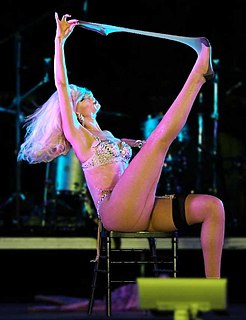 Gypsy Rose Lee was an American burlesque entertainer and vedette famous for her striptease act. Also an actress, author, and playwright, her 1957 memoir was adapted into the 1959 stage musical Gypsy.

The G-String Murders is a 1941 detective novel written by American burlesque performer Gypsy Rose Lee. There have been claims made that the novel was written by mystery writer Craig Rice, but others have suggested that there is sufficient documented evidence in the form of manuscripts and correspondence to prove Lee wrote at least a large portion, if not the whole, of the novel under the tutelage of editor/friend George Davis with some essential guidance from her good friend Rice. The novel has been published under the titles Lady of Burlesque and The Strip-Tease Murders. Set in a burlesque theater, Lee casts herself as the detective who solves a set of homicides in which strippers in her troupe are found strangled with their own G-strings. 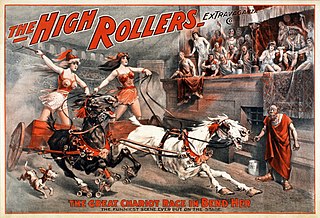 Panties are a form of underwear primarily worn by women. Panties can be form-fitting or loose. Typical components include an elastic waistband, a crotch panel to cover the genitalia, and a pair of leg openings that, like the waistband, are often made of elastic. Various materials are used, but are usually chosen to be breathable.

The Burlesque Hall of Fame (BHOF) is the world's only museum dedicated to the history, preservation, and future of the art of burlesque. Located in the Las Vegas Arts district at 1027 S Main st. #110, BHOF is a tourist destination and non-profit 501 (c)(3) educational organization offering tours of its vast Collection of costumes, memorabilia, props and ephemera from burlesque's heyday through contemporary practice; classes for individuals and groups at all levels including beginner; movie screenings; research access for students and journalists; and a gift shop. 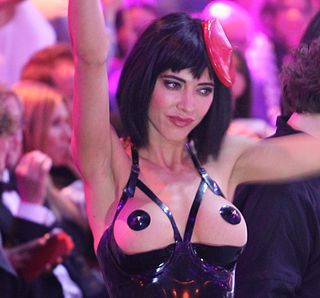 Erik Lee Preminger is an American writer and actor. He has also been known as Erik Kirkland, Erik de Diego, Erik Lee, and Eric Preminger. 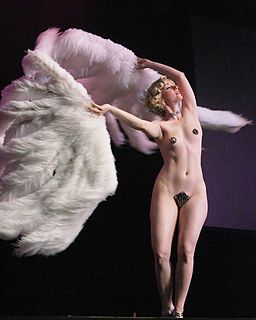 Neo-Burlesque, or New Burlesque, is the revival and updating of the traditional American burlesque performance. Though based on the traditional burlesque art, the new form encompasses a wider range of performance styles; neo-burlesque acts can range from anything from classic striptease to modern dance to theatrical mini-dramas to comedic mayhem.

Lady of Burlesque is a 1943 American musical comedy-mystery film directed by William A. Wellman and starring Barbara Stanwyck and Michael O'Shea. It is based on the novel The G-String Murders written by strip tease queen Gypsy Rose Lee.

Undergarments are items of clothing worn beneath outer clothes, usually in direct contact with the skin, although they may comprise more than a single layer. They serve to keep outer garments from being soiled or damaged by bodily excretions, to lessen the friction of outerwear against the skin, to shape the body, and to provide concealment or support for parts of it. In cold weather, long underwear is sometimes worn to provide additional warmth. Special types of undergarments have religious significance. Some items of clothing are designed as undergarments, while others, such as T-shirts and certain types of shorts, are appropriate both as undergarments and as outer clothing. If made of suitable material or textile, some undergarments can serve as nightwear or swimsuits, and some are intended for sexual attraction or visual appeal.

Angel Cecelia Helene Walker was an American exotic dancer specializing in stripping and burlesque under her stage name Satan's Angel. 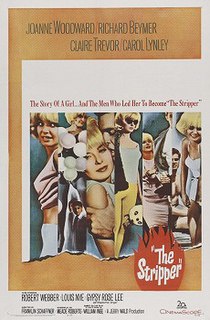 The Stripper is a 1963 American drama film about a struggling, aging actress-turned-stripper, played by Joanne Woodward, and the people she knows. It is based on the play A Loss of Roses by William Inge. 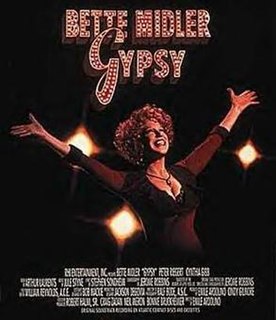 Gypsy is a 1993 American made-for-television musical comedy-drama film directed by Emile Ardolino. The teleplay by Arthur Laurents is an adaptation of his book of the 1959 stage musical Gypsy, which was based on Gypsy: A Memoir by Gypsy Rose Lee.

Mary Elizabeth Dawson, née Elizabeth Buzby and better known as Mademoiselle Fifi, was a dancer whose onstage performance at Winter Garden Theatre on the night of April 20, 1925 was memorialized in The Night They Raided Minsky's. A Philadelphia native, her given name was Mary Dawson. Her mother was a devout Catholic and her father was a Quaker who worked as a policeman.

Georgia Sothern, born Hazel Anderson, was a burlesque dancer and vaudeville performer. She was known for her striptease performances. She gave an interview to the Harvard Crimson during a trip to the Old Howard Athenaeum in Boston during 1939. She toured New York Philadelphia, Boston, Buffalo, and Miami. She was a red-head. One of her performances was captured in a Film Theatarettes short film. She wrote her memoir titled Georgia: A Life in Burlesque. She had a series of marriages.